The Death and Life of Safdar Hashmi

‘I was very fond of Safdar, but who wasn’t? We liked him for his charming personality, his easy laughter, sophisticated manners, effortless articulation, clear-cut views and tender human values.’ – Habib Tanvir

On New Year’s Day in 1989, Jana Natya Manch – Janam – the theatre group Safdar was a part of, and which he led, was attacked while performing a street play on the outskirts of Delhi. He was only thirty-four when he died from injuries sustained during this senseless attack.

Beginning with a record of the attack that killed him, this vivid memoir illuminates the life of Safdar Hashmi – artist, comrade, poet, writer, actor, activist, and a man everyone loved. But this is not a book about one man or one tragic incident. Halla Bol shows us, close up, how one man’s death and life are intertwined with the stories of many people.

For a generation that grew up without knowing Safdar Hashmi, Halla Bol renders his passion, humour and humanism into an intimate portrait. It also gives an understanding of resistance, and the strength to put it into practice. It shows the profound link between ideology and real-life struggle. The ideas that Safdar and his colleagues grappled with during a period of tumult and change in India are harbingers of the society we are today.

Halla Bol, the play Janam was performing in Jhandapur at the time of the attack, is included in English translation as an appendix to the book.

Read our blog posts on the writing of the book – The Journey of ‘Halla Bol: The Death and Life of Safdar Hashmi’

A teaser for a podcast based on Sudhanva Deshpande's book on Safdar, हल्ला बोल: सफ़दर हाश्मी की मौत और ज़िंदगी, releasing on April 22. The book recounts Safdar's life from the perspective of one of his close collaborators.

BIOGRAPHY & MEMOIR | THEATRE |
Skip to the end of the images gallery 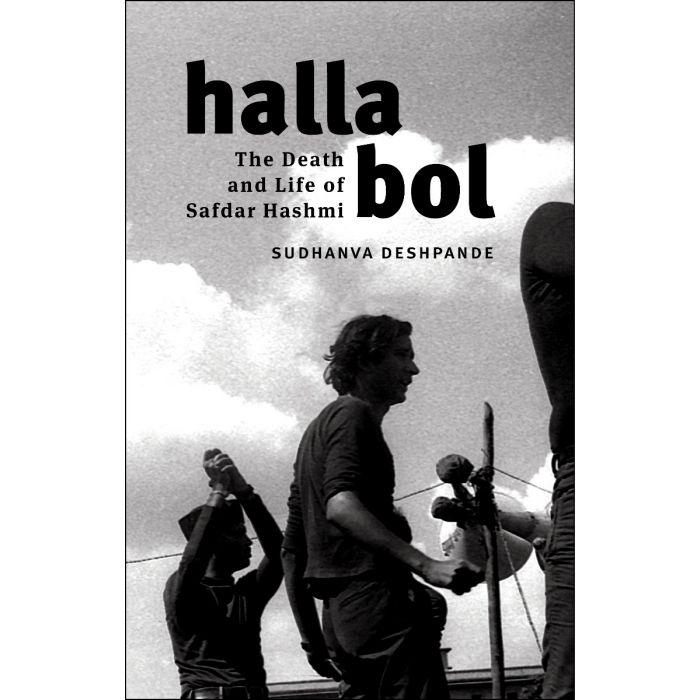 Halla Bol is not a traditional biography. It relies on personal and collective memory, interviews, Safdar’s diaries, Janam archives and other sources to construct a portrait of the artist. And that I think is a remarkable achievement. Safdar would have liked it too. The artist is thus memorialized through a source he found most nourishing – his lifelong interest in people which also defines his artistic credo.

A major part of the book is dedicated to exploring the process of conceiving, writing, rehearsing and performing street theatre. This part is particularly fascinating because it is the first time a theatre practitioner has actually described the process in sufficient detail. … These are excellent authoritative materials that will over time form an essential part of the history of theatre in our country. … Sudhanva is able to move effortlessly from the first person narrative to nuanced backgrounders on several issues, and Safdar emerges as fierce and gentle, charming and charismatic.

This brilliant and painful biography is like an intimate embrace from one of Hashmi’s oldest comrades and compatriots, which holds the reader’s hand and walks them through a life which defied odds and without intending to leave a mark, continued to do his work as a human being in a world which was rapidly fragmenting in the name of caste, class and religion around him.

[Halla Bol] is a must read, not only to travel through the extraordinary journey of Safdar, but even to learn how to write a biography of an activist who was committed to the cause of justice, equality and the construction of a better society, and who lived his life not in isolation, but as part of a collective movement.

[Halla Bol] reminds us of the compelling stories of those who acted, documented and carried forward Hashmi’s legacy over the next 31 years. And it has poignantly lurched into our conscience at a critical time.

Deshpande’s book comes at an opportune time. Street theatre has become a galvanizing force in people’s movements and protests. This account of Hashmi’s life and death offers valuable lessons to all those who share his values of secularism and harmony.

Deshpande’s account is moving and straightforward by turns. Adding flesh and colour to the portrait are passages describing the creative choices that shaped each major play, the networks of talent that fed into Janam, the web of friendships that served as its scaffolding. Actors and writers will take particular delight in the details of how a particular text was fine-tuned, or how a show was salvaged from potential disaster.

Sudhanva in Halla Bol provides us with something we have never had before—a visceral, gut-wrenching, etched-in-detail first-person narrative of the events of the day. ... For me though, perhaps one of the most enjoyable, revelatory parts of Halla Bol are the intimate portraits we get of a host of personalities normally not written about in artistic and communist histories, with historiographies being so riddled with the cult of personality of great, charismatic men.