The Revolution of Ordinary People: Russia, 1917 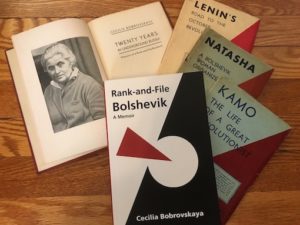 Lenin did not make the Revolution in 1917. Nor did Stalin. Nor Trotsky. They each provided crucial leadership, with Lenin’s role being essential from April 1917 onwards. But they were part of a tidal wave that had first risen in 1905, crested and then rose again during the Great War. This tidal wave was lifted by ordinary people – factory workers, landless peasants, housewives, soldiers, students and those who barely found the means to survive. It is they who made the Revolution happen in February – with the overthrow of the Tsar and Tsarism – and then again in October – with the push against the insincere and indecisive parliamentary government of Alexander Kerensky (1881-1970).

On 7 April 1917, Pravda, the Bolshevik paper, published Lenin’s April Theses. These ten points captured the sentiments of the masses who had by strikes, mutiny and demonstrations brought down the Tsar. It was the kind of theory put forward by the April Theses that drew these masses into the Bolshevik party, which had only 10,000 members in April but half a million members by October.

What were these theses? Here is my summary:

It was clear and precise. Power had to move from the ruling class to the new class that had to rule, the working-class and peasantry, the majority of humanity.

The Revolution came swiftly. It broke the back of an entrenched and powerful autocracy. The victory of the working-class and the peasantry surprised people. Even journalists could not keep up. The Committee of Petrograd Journalists produced the news-sheet (below) on 27 February 1917, during the first Revolution of the year. The journalists wrote, 'Newspapers are not being published. Events are happening too fast. The population should know what is going on'. But they could not, or at least not easily.

The people could not imagine that a Revolution could come again so soon after their historic defeat in 1905. That revolt had set in motion the view that Tsarism could remain in power indefinitely. But here it was – gone.

Scholars hastened to try and understand the emergence of the revolutionary wave that toppled the autocracy. Enemies of the Revolution wanted to suggest that the Bolsheviks had conducted a coup in October. It was this ‘coup,' they suggested, that destroyed the Revolution – the proper bourgeois revolution of February 1917. They argued that the Bolsheviks did not have deep roots amongst the Russian working-class, even less deep roots amongst the peasantry. This was a party of intellectuals who had taken advantage of the situation and then used force to maintain their rule. Such a view of October was held by aristocratic and bourgeois scholars who fled Russia and by Western scholars who took a negative view of the Revolution.

Marxists and those who had sympathy for the Revolution took a different view. For them, this was a Revolution of the working-class and large sections of the peasantry who had been made radical by the Great War. But how to prove this? In 1920, the Marxist scholar M. N. Pokrovsky (1868-1932), see below, said that the party’s ‘archives’ had been ‘carried in the pockets of secretaries and destroyed tens of times over.' The new government had to create the archive out of the memories of the ordinary activists, cadres, and sympathizers. The memory of those who created the crowds and those who came and formed the crowd was necessary.

For that reason, the USSR created a slew of institutions:

The point of these associations was to collect archival evidence about the struggles that led to the Revolution, to collect oral histories from its participants and to interpret these materials into the story of October. This was a massive project. On 1 November 1918, Izvestiiacarried a front-page story asking ‘comrade participants of the October revolution’ to gather and submit materials that they might have of the uprising. There was no way to make the case about the range of support in the pre-revolutionary period without documentary evidence.

One of the great debates in this early phase of Soviet history-writing was to understand the mass character of the pre-revolutionary struggles. The dominant view was that Marxist ideas emerged in Russia through the work of Georgi Plekhanov (1856-1918): his booklet Socialism and the Political Struggle (1883) and his Emancipation of Labour Group (1883). But this suggested that Marxism came from outside Russia. Another view, pushed by Pokrovsky and others, was that Marxism developed alongside the growth of the working-class and agrarian populist movements inside Russia – whether the Northern Union of Russian Workers (1878) or the workers’ section of the Narodnaya Volya (1879). What is remarkable about this debate for our purposes is that each side wanted to ensure that it was clear that the Bolsheviks had mass support both institutionally and ideologically. Their Marxism was not smuggled in like a pamphlet from Geneva but grew out of the struggles of the Russian workers and peasants over the course of decades.

I suppose that is why I was so eager for LeftWord Books to publish the memoir of Cecilia Bobrovskaya (1873-1960). Bobrovskaya was a member of the Society of Old Bolsheviks. She wrote many small pamphlet-sized memoirs of her comrades, including one rather beautiful one on Ivan Babushkin (1873-1906). Last year, I went through my bookshelves to search for a little packet of these pamphlets that I have collected over the years. Amongst them is R. Obolenskaya’s Kamo: the Life of a Great Revolutionist, L. Katasheva’s Natasha: A Bolshevik Woman Organizer, and Bobrovskaya’s Lenin’s Road to the October Revolution. These are English-language booklets published in the 1930s by Modern Books (London) and Workers’ Library (New York). Next, to the packet, I found Bobrovskaya’s memoir, a much longer and richer work, called Twenty Years in Underground Russia: Memoirs of a Rank and File Bolshevik. It had been published in 1934 by the American Communist Party’s press – International Publishers. These books have not been republished since. I wanted to bring them back into circulation.

Last month, LeftWord Books in Delhi produced a volume from Bobrovskaya called Rank-and-File Bolshevik (It is the book at the front, with the lovely Constructivist cover). It is her memoir – which I annotated – and her pamphlet on Lenin’s role in the Revolution. It was with great joy that I wrote the introduction for the volume, which you can get from our website here.

Bobrovskaya’s memoirs show us the work that it took for ordinary people to build the revolutionary wave that toppled the autocracy. It was people like Bobrovskaya as well as Semen Ivanovich Kanatchikov (1879-1940), Ivan Babushkin (1873-1906), Concordia ‘Natasha’ Samoilova (1876-1921) and Simon Arshaki ‘Kamo’ Ter-Petrosian (1882-1922) that had to be at the center of the story. They are the Russian Revolution.

In October 1917, the working-women of Petrograd who had joined the Bolshevik party held a conference. In the room were people like Natasha the Bolshevik, Emilya Solnin from the Aivas plant, the spinner Vasina from the Nitka Factory and Vinogradova from the Bassily Island Pipe Factory. These were hard-working women – factory workers and militant revolutionists. They wanted to overthrow the government of Kerensky. They marched to see Lenin in the Smolny, where he lived and worked. ‘Take power, Comrade Lenin: that is what we working-women want,' they said to him. Lenin replied, ‘It is not I, but you - the workers - who must take power. Return to your factories and tell the workers that’. This is what they did.

Of Natasha (who is at the left of the picture below), Bobrovskaya wrote,

A passionate revolutionary, Natasha one day delivers militant speeches at a mass meeting in the Mitishchi Woods, next she calls an organisational meeting in Golutvino, the day after she sits in conference with the representatives of the Kolomna Works, from there she goes to Shchelkovo, Kuntsevo, Pushkino: everywhere she is expected with impatience, everywhere she rouses dormant thoughts, stirs a wearied will, binds the scattered suburban Moscow proletarian masses who are recovering from the defeat of 1905, with strong organisational ties.

I am thinking of so many of my comrades when I type this in from Bobrovskaya's memoirs. Such comrades are the essence of a revolution - the people who build mass confidence and build the infrastructure of rebellion.

Bobrovskaya's book from LeftWord Books is our tribute not only to Bobrovskaya herself but to the Revolution of Ordinary People that took place in Russia in October 1917.