Three Cyclists from India and Encounters of Empire 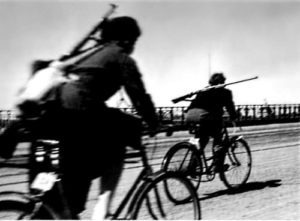 ‘In China, the people did not believe they were Indians, because they were clean-shaven…’

The continual mining of the Comintern Archive in Moscow, either by visiting the archive or consulting the online digital archive, furthers our understanding of (as in my case) anti-colonial and anti-imperialist movements and experiences in the interwar period.

By perceiving these movements as circulations of experience, and, transnational in scope and nature, the documents in the Comintern Archive tells us about previously unknown encounters and narratives that either supports already established research results or adds new layers of understanding to what really happened in Europe, the US, Latin America, Asia or Africa between the wars. The Comintern Archive – built on the transnational work of the Comintern – demands a transnational perspective from its historians.

The Comintern Archive is filled with fascinating stories of this transnational work. One story is that of the three cyclists who went from India on a ‘world tour’ on their bicycles sometimes in 1923, to return home to Bombay four years later. The documents for this journey are in the files of the League against Imperialism (1927-37) that are in the Comintern Archive. In the organisation’s official publication – Press Service (1927) – this tale appears under the title, ‘Disabilities of Indians and Chinese in French Indo-China’. The Press Service is a useful resource of interwar anti-colonial history. It functioned as a letter writing service to disperse and circulate information to a Western reading circle about incidents and developments in the colonies. The journal aimed to reach, first, readers involved at some level with the doings of the League against Imperialism, and second, readers from the anti-colonial movements in the West. They were also read by secret service agencies to monitor the activities of the organisation.

When we think of ‘communication’ in the world of the Comintern, we mostly imagine the ‘train’ or the ‘ship’ or indeed the ‘telegraph’. But we do not think of the bicycle! But so be it. Here, in this story, the journey that linked India, China, Korea, Indo-China and the United States is undertaken on a bicycle.

The three Indian cyclists left Bombay in 1923 with the intention to visit and experience new places and cultures rather than merely read about them. They returned to India in 1927 with a deeper understanding of the ‘methods of Japanese, French, American and British imperialism’. What they had seen ‘convinced them of the urgent need of national independence’, which, in hindsight, was an echo of the initial points declared by the US President Woodrow Wilson at the Versailles Peace Conference in 1919, an epochal event that faded as soon as imperial power interests assumed the leading geopolitical role in the peace negotiations. The message nonetheless found new impetus with the official establishment of the League against Imperialism in Brussels 10-14 February 1927. Hence, it was all about continuing the need of declaring and furthering the demands of the colonies to receive national independence, based on the principle of national self-determination. What did the three cyclists, of whom there is little known based on the content of the report in the Press Service, experience on the journey through Asia, reaching all the way to the United States and back again to Bombay?

During their journey, the cyclists experienced the solidarity of other colonized people. Arriving in Korea, the cyclists were welcomed and ‘received a very hearty’ reception wherever they went. As ‘victims of Japanese imperialism’, the Koreans connected with the fate of the Indian nation and the historical heritage of belonging to a ‘great land’, which had been subjected to cruel exploitation by the British ‘for over a century and a half’.

The cyclists also learned about comparative colonialism. In Indo-China, the three cyclists got to know very well the ‘blessings of French imperialism’, a statement that explicitly referred to the most stringent and racial laws against Indians and the Chinese that had been put into effect for the sole reason to subject them and that they were ‘regarded as pariahs by the French authorities’. Different treatment of nationalities also emerged during the journey, and as was noted, the Japanese population in Indo-China was exempted from discriminating laws and given the status of ‘civilized beings’ in comparison with the Indians and Chinese. As the adventure finally reached the US, and as the three cyclists made port in San Francisco, they could read on signboards in many places that ‘Japs, Chinese, Indians, Dogs, and Cats not allowed’.

Racial prejudice was not only rooted in national cultures, but it was also transnational in scope. What the cyclists saw in San Francisco, they had also seen in refracted from in Indo-China.

While the research community of global history focuses much attention on, for example, commodity chains or migratory patterns across borders, ours is a narrative which on a peculiar note captures the intentions of travel and the will to accomplish a journey. Or as the Press Service explicitly highlighted, it had been a ‘comparative study’ of imperialism. By their successful visit to a large portion of South East Asia and the Western shores of the US, this can also be seen as a tale of intercontinental tourism accomplished by three unknown individuals, born in India but part of the British imperialist realm. The report in Press Service concludes with the cyclists’ impressions on the dynamics and practices of imperialism after completing the ‘the world tour’. Accordingly, French imperialism was as far away as possible from the national insignia of ‘liberty, equality and justice’ as it was put into practice in the French colonies, whereas British imperialism came as no surprise to the three Indians, meaning, it was pretty evident that all means were taken by British colonial authorities to act as ‘protector of the interests of British nationals’. However, what the League against Imperialism wanted to emphasize by publishing the account was the structural practices of colonialism and imperialism, a narrative which hopefully would further an understanding in the West of colonial oppression and social injustice, hence the title of the report: ‘Disabilities of Indians and Chinese in French Indo-China’. Yet, the document includes something else: the encounters of three cyclists’ from India, visiting Korea, China, Indo-China and the US, and how they perceived different characteristics of colonialism and imperialism.

This single document outlines in general terms the fundamental approach of ‘thinking transnational’, or as Akira Iriye writes in Global and Transnational History (2013), ‘[T]ransnational history, … focuses on cross-national connections, whether through individuals, non-national identities, and non-state actors or in terms of objectives shared by people and communities regardless of their nationality’. Hence, what the encounter of these three unidentified cyclists from India tells us is that regardless of identifying themselves as ‘Indian’, communication and travel across continents during their four-year journey was made possible through a belief of wanting to experience a world not restricted by borders, but rather, and by using the mechanical means of the bicycle, this enabled encounters and meetings of a novel kind that changed their understanding of colonialism and imperialism.

Extract from the document:

Three Indian cyclists’ who left Bombay on a world tour some four years ago have just returned to their country and the story they tell of the reception accorded to them in certain countries deserves notice. In San Francisco, for example they found signboards in many places with the inscription: ‘Japs, Chinese, Indians, Dogs and Cats not allowed’.

In Korea they received a very hearty welcome wherever they went and the victims of Japanese imperialism showed deep understanding and sympathy for the great land that has been the object of ruthless exploitation by British imperialism for over a century and a half.

In China the people did not believe they were Indians, because they were clean-shaven, whereas the Indians they knew were the tall bearded soldiers who were employed by Britain to shoot down the Chinese workers and peasants.

Indians and Chinese, however are still required to pay a poll-tax of 50 dollars even when they are not immigrants but merely visitors passing through the country and each of them is required to give an imprint of all five fingers.

The three cyclists’ were struck by the difference between this treatments and the words ‘Liberté, égalité, fraternité’ inscribed on all the coins and documents of the French Imperialist Republic, they were no less surprised, however, by the discovery that the British Consul - who is officially ‘the protector of the interests of British nationals’ and to whom they applied for redress, - had in consultation with the French Government arranged a plan to seize the cyclists’ and deport them to Singapore!

Their comparative study of the methods of Japanese, French American and British imperialism has convinced them of the urgent need of national independence.

Fredrik Petersson teaches at Åbo Akademi University (Finland) and Örebro University (Sweden). In our LeftWord Books volume – Communist Histories, Volume 1 edited by Vijay Prashad – Petersson has an illuminating essay, ‘The “Colonial Conference” and the Dilemma of the Comintern’s Colonial Work, 1928-1929’ (2016). He is the author of International Communism and Transnational Solidarity: Radical Networks, Mass Movements and Global Politics, 1919-1939 (Leiden: Brill, 2016)