Book Production as an act of Political Resistance 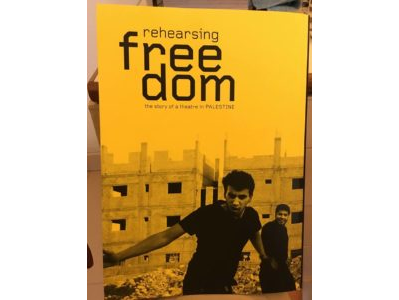 In April this year, we at LeftWord Books, published our first visual book. Edited by Johanna Wallin, ‘Rehearsing Freedom’ is a record of the first ten years of the work of The Freedom Theatre (TFT) in Jenin, Palestine. The Freedom Theatre was created in a refugee camp in Jenin. When it was created, the camp was still recovering from the devastating battle of Jenin unleashed by Israel during the second Intifada.

"Sherna Dastur reinterprets the tension, passion, the occasional joy and the bleakness with a masterly juxtaposing of photographs in muted matte colours, the brilliantly subtle use of greys and black. The overall chiaroscuro effect is so powerful that the reader is at once overwhelmed and disturbed by the poignant narrative." - Vikas Satvelkar, former executive director, National Institute of Design

Sudhanva Deshpande, our Managing Editor at LeftWord Books, and also an actor and a director with Jan Natya Manch (Janam), travelled to Palestine in March-April 2015 and spent a fortnight with The Freedom Theatre. This visit led to a joint production of TFT and Janam with eight members of TFT coming to India. The joint production then toured 11 cities of India in the winter of 2015-16. Soon after this, TFT proposed the idea of this book, which LeftWord was delighted to partner in. LeftWord has had a long association with designer and filmmaker Sherna Dastur, who agreed to come on board as the designer.

“Rehearsing Freedom places the rehearsal room in the context that it has always meant to be in. The context of moving from the bondage of all kinds to imagining a world that is free. This book, which in itself is a work of art, combines courage and aesthetic, perhaps the two most important ingredients in any theatre at any point of time.” - Abhishek Majumdar, leading playwright and director

As it was going to be our first visual book, the process was entirely different from other books we’ve published. Sudhanva, Sherna and Johanna Wallin (Communication Officer, TFT) started the process with Johanna proposing the basic outline and flow of the book. At the same time, Sudhanva and Sherna began working with fragments of text and images.

Though the book is divided into sections and contains about 30,000 words, Johanna and Sherna have created an inherently visual narrative that tells a story.  Rehearsing Freedom is a book that is best read as one reads a graphic novel — from beginning to end, in that order.

"Rehearsing Freedom: the story of a theatre in PALESTINE is not a book that you can read while sipping coffee during your leisure time with stretched legs and a cushion for your backrest. It is a book that would make you restless and inquisitive." - Komita Dhanda, Jan Natya Manch

One of the key issues in designing and producing the book was the look and feel. Given TFT’s work in the Palestinian liberation struggle and their location in a refugee camp, the book couldn’t have a slick, polished, glossy and expensive look. The design and production needed to evoke the Palestinian reality, where things are always uncertain, where every corner you turn reveals something unexpected, where certainties vanish and a subtle sense of unsettling take over.

The other critical factor was the weight of the book. Given the difficulties of getting things into Palestine, the book had to be as light as possible. TFT Friends’ Associations in the US, UK, Sweden, and Portugal also wanted copies, for which again a relatively light book was preferred.

“This is a gorgeous book, with its inspired and thoughtful design, leafs, textures, inserts, dark dramatic backgrounds. I was deeply affected by the hyper-real feel it conveys, woven as a moving account through living history. It has almost a slow motion film like quality to it.” — Kaushik Bhaduri, magician

As work began, another issue came up. TFT no longer has original copies of some of the key images of their history (for reasons too complex to go into here!). In several instances, we had to work with images that were of relatively low resolution. In some cases, she had to work with video screen grabs.

The choice of paper, then, is dictated by all these factors — the aesthetic and political consideration towards a non-glossy look; the weight factor; and the relatively low resolution of several images used. Lustra Press excelled themselves in printing and production, going well beyond the call of duty to rise to the challenges posed by this book.

Sherna decided to use tipped-in pages of various shapes and size in the book. Part of it was to give the reader an experience of unpredictability, but also it allowed a different, lighter paper to be used, which helped reduce the weight of the book.

"The politics of resistance forms the spine of this book and creates its arguments and audacity through the multi-shaped pages of images and text. History is narrated not through linearities of time but with an understandilng of the connectedness of thoughts and actions; of ideas, positions and their manifestations. It is a story of resistance through the arts in occupied zones, that breathes through the design and production of the book and not just through its content or substance." - Arundhati Ghosh, executive director, India Foundation for the Arts

Fairly late into the design process — in fact, after the overall design and flow had been worked out and finalized — Sherna proposed reversing the book. Instead of going moving from left to right, as traditionally books move in the Anglophone world, why doesn’t the book move from right to left, as in the Arabic and Hebrew traditions, she asked. It was a bold suggestion, and a risky one, but Johanna and her colleagues in The Freedom Theatre responded very positively to it.

“This book is like an X-ray that scans the innermost depths of Occupied Palestine. The X-ray provides a brutal report about the Occupation and its future. You realise that our hope for a peaceful future is wistful - and Utopian. You realise that the villains are not James Bond stereotypes in underground caves nor do they resemble Iago in Shakespeare’s play. It is the sophistication of the arguments in the cafes of Washington DC that determines the brand of the military tanks in the streets leading to the Jenin Refugee Camp.” — Ramu Ramanathan, Editor, PrintWeek and playwright

By having the reader in the Anglophone world go from right to left, the book asserts its location. It also shows a certain confidence. It is as if The Freedom Theatre is saying, we will meet the world on our terms, not on terms set for us by the West.

Sherna’s design philosophy is to make things subtle and organic. She dispenses with bells and whistles. Her design doesn’t scream attention to itself. And yet, everything is carefully thought out and calibrated — exactly which image to use, in what size, placed where, with or without margins, the colour of the background, the fonts and their weights, etc. — and placed just so.

“Sumptuous, utterly sumptuous. And inspiring. And uplifting. A testament to courage, creativity, and the power of art.” — Sanjna Kapoor, theatreperson

The challenge for us as the producers of this book was to set a narrative with the help of design which ultimately enhances the political resistance attached to the story. Sherna, Sudhanva and Johanna worked as a team and managed to do that. The book is available on our website and in our store.