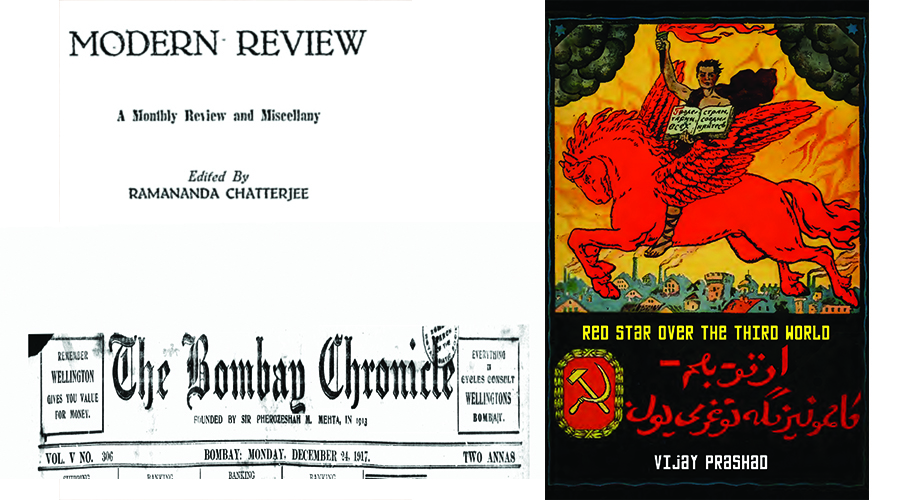 For more on this subject see

Red Star Over the Third World, by Vijay Prashad

Liberate the Colonies!: Communism and Colonial Freedom 1917-1924, edited by

On December 24, 1917, just months after the October Revolution conducted by the Bolsheviks in the former Tsarist empire, the Bombay Chronicle wrote an editorial about that event.‘Our ideas of the Bolshevik organisation are very vague, . . . .’ wrote the anti-colonial nationalist editors. ‘We recognise the fact that they could never have met with the present success had there not been something in their programme that was attractive to the people, and a promise which would serve to allay some present fear. . . . The Bolsheviks came with a definite scheme which took into consideration none save the peasants and promised immediate confiscation of all lands for the people’.

In February 1919, Ramanand Chatterji wrote in Modern Review, which had been covering the revolution since early 1918: ‘It is refreshing to turn from the chorus of abuses and misrepresentation directed against the Russian Soviets by the capitalist press to the illuminating sketch of the framework of the Soviet state penned by John Reed in the pages of the Liberator. We are at last, given an insight into the mighty efforts of revolutionary Russia to organise herself and work out her communist ideals. Says the writer.’

Both the Bombay Chronicle and Modern Review acknowledged the remarkable nature of the revolution in the Tsarist empire which formed the Soviet Republic, and later the Union of Soviet Socialist Republics, as well as the ugly propaganda attacks against the revolution and the new socialist state. These anti-colonial nationalists understood immediately the possibilities in this revolution, which confirmed that people’s movements – organised and led by capable and determined leaders – could overthrow empires and could build a new social process. This recognition shaped the view in the colonies from one end of the planet to the other. People in the Dutch East Indies and the British West Indies no longer wanted to be subjects of the Dutch or the British, but nor did they long to overthrow the empire to hand over power to their old feudal lords or to the new capitalist bosses. The impact of the October Revolution was clear to the Surabaya Soviet in 1917 (in East Java) and to the Rand Revolt in 1919 (in South Africa): empires can be brought down and the new society that would replace it need not mimic the old.

The report of the Mont-ford Commission, published in 1918, offered a powerful assessment by the British imperialists of the impact of the October Revolution in rural India: ‘The Revolution in Russia was regarded in India as a triumph over despotism. It has given an impetus to Indian political aspirations. The people in the villages heard of the events in far off Russia from the soldiers returning from various fronts in Europe and the Middle East after the end of the war. This was true of many villages in Northern India, particularly in the Punjab, where the bulk of the Indian Army was recruited, which took part in the war and also in the military operations in Turkestan and Transcaspia and in Central Asia’. These latter regions – Turkestan, Transcaspia, and Central Asia – comprised the old Tsarist empire, where Indian troops were forced by their imperial masters as part of the Malleson Mission to join the White Armies against the Soviet Republic and its Red Army. Indian gunners from the 19th Punjabi infantry helped the anti-Bolshevik forces in Bahram Ali (east of Ashkhabad), in Merv, in Kaka, and in Dushak. But these same gunners, or those who survived, returned home with other opinions, visions for the emancipation of their own lands. In the lands bordering the new Soviet Republic, some of these troops had heard of the Indian revolutionaries such as Maulvi Barkatullah, Shaukat Usmani and Mahendra Pratap Singh – men who had come alongside hundreds of other muhajirs to join the Soviets and to bring arms back to India for their own revolution; they would have met the Ghadarites, the revolutionaries who had formed their party in California in 1913 and then travelled back to Punjab to fight the imperialists and established socialism. Amongst these Ghadarites were Kartar Singh Sarabha, Pandit Kanshi Ram, Bibi Ghulam Kaur, and Vishnu Ganesh Pingale. Soldiers in Rawalpindi, Jhelum, and Peshawar revolted, but were struck down by the imperial forces. Their revolt provoked the British to put in place the Defence of India Act (1915), which was spur for the protest movement that included the demonstration by the unarmed Punjabis and the massacre by the British imperialists at Jallianwala Bagh (1919). Because of the repression, and because of the example of what they heard had been taking place in the Soviet Republic, these Punjabi soldiers and peasants looked northwards to see the Soviet sun rise high in the sky.

Why did the anti-colonial Indian nationalists take such immediate inspiration from the early experience of the Soviet Republic? The main reason was that the Soviet Republic had – very quickly – solved some of the most basic problems faced by Indians who lived under colonial rule.

These six points are merely a few instances of the great advances made by the Soviets that inspired people in far off countries that tried to fight off colonialism. The most important point, however, is not easily captured by this or that social advance. It is something more ephemeral and yet extraordinarily significant. This is the sensibility that the future is possible, that utopia is not an impossible place. That feeling that nothing can change, except perhaps the hope that small reforms might to some extent make things better. That feeling that these small reforms in such wretched conditions as colonial rule had produced made it seem as if colonial rule itself and the capitalist conditions that were its foundations would remain forever. It was only after the October Revolution, with all its profound changes, that it became possible to imagine the end of colonialism and the end of capitalism. In 1957, Mao, who led the Communist Party of China and the Chinese people to socialist victory in 1949, visited Moscow to celebrate the 40th anniversary of the October Revolution. His comments do not say anything that was not said by people like Vietnam’s Ho Chi Minh and Cuba’s Fidel Castro. ‘Before the revolution Russia was relatively backward economically and technically. Now the Soviet Union has become one of the world’s first-class industrial powers’, Mao said. And, as a consequence of the Soviet experience, Mao warned, ‘The imperialist wolves should remember that the days when they could manipulate the fate of humanity and carve up the Asian and African countries as they liked, have gone forever’.