The Left and the BJP 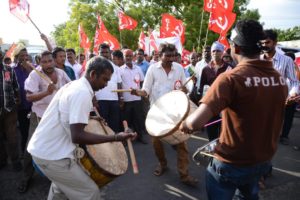 On 6 September, CPI-M Politburo member Prakash Karat wrote an essay in the Indian Express. Here Karat, in a few hundred words, made the distinction between an authoritarian and a fascist regime. He argued that the BJP-led government is not fascist but authoritarian. The point of the essay was to show why there was no heated urgency to make a general alliance – from above – with the Congress Party and others against the BJP. What was needed was to create solidarity from below and to create an alternative programme.

The historian Jairus Banaji responded, on 12 September, at the website Sabrang India with an intemperate essay. The author, who has put together a very useful book on fascism, provided an ad hominem attack on Karat. Rather than use the insights of this book to elaborate upon the discussion about the BJP’s essential character and the strategy and tactics needed to confront it, Banaji used his essay to score points against ‘Stalinism’.

The idea of ‘Stalinism’ closes down conversations. The term comes to us from Lazar Kaganovich, a close associate of Joseph Stalin, who was – they say – the Oldest Bolshevik (he died at the age of 97 shortly after the USSR collapsed. But Kaganovich used the term in a positive way. The Left critics of the USSR, such as Leon Trotsky, would pick up the term to describe what they called a ‘bureaucratised degenerated workers’ state’. Stalinism, for them, condensed the betrayals of the October Revolution. Everything bad about the USSR was attributed to ‘Stalinism’. Banaji’s use of the term is not neutral or descriptive. It is a way to dismiss an entire segment of the Indian Left.

What I found most disturbing about his essay is that it comes at a time of heightened Left unity in India, and where the concept of Left unity is beginning to find its way across the world. Debates over ‘Stalinism’ and so on are dated. They are no longer useful. It is for that reason that I wrote a long essay, also published in Sabrang, to point this out to Banaji and to others who find his tone acceptable. My essay ends on this note, ‘Banaji’s ill-toned attack on Prakash Karat is evidence of the kind of sectarianism that the broadly defined Indian Left needs to shed. Left unity is essential if the Left in India is to create the unity of the workers and peasants whose lives and hopes depend on it’.

The essay draws from my experience of researching and writing No Free Left: the Futures of Indian Communism, now in its second edition (and in e-book format). The opening chapter of the new edition is on the theme of Left unity. The book makes the case for the widest united struggles from below, at the same time as it cautions against the short-cut of alliances with bourgeois parties that have a neo-liberal orientation (such as the Congress Party).

We are in the time of Left unity. All the evidence suggests that sectarianism should not be the mood of our present.