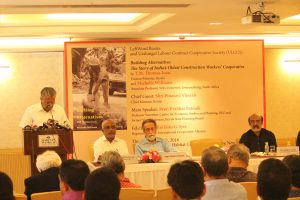 The launch of the new book 'Building Alternatives: The Story of India's Oldest Construction Workers' Cooperative' became an occasion to celebrate alternatives that could move humanity forward in the long road to socialism.

The book, which recounts the journey of the Uralungal Labour Contract Cooperative Society (ULCCS) in Kerala, has been written by T.M. Thomas Isaac, Kerala's Finance Minister, and Michelle Williams, Associate Professor at the Wits University, Johannesburg, South Africa. It has been published by LeftWord Books.

Pinarayi Vijayan, the Chief Minister of Kerala, formally released the book at a function on 29 March 2018 at the India Habitat Centre, New Delhi. Prabhat Patnaik, Professor Emeritus at the Centre for Economic Studies and Planning, Jawaharlal Nehru University, was the main speaker.

ULCCS was founded in 1925 by Vagbhatananda Guru, one of the most important social reform leaders in Malabar who fought against the caste system and social evils.

This Society took up jobs on contract and distributed earnings among members. Today the society has grown phenomenally, diversifying its activities into various fields. Apart from taking up the building of roads, bridges, buildings etc, the Society today runs agricultural farms, the Sargaalaya Crafts Villege and has completed the building of the UL Cyber Park, an IT park. UL Technology Solutions, another offshoot, develops software in the fields of banking, e-governance, healthcare, enterprise GIS (geographic information system) etc.

Speaking on the book release function, Prabhat Patnaik said that the ULCCS has against all odds, not only survived, but thrived. “Its very existence is an act of heroic assertion of what is possible,” he said.

This book also raises very deep theoretical issues, Patnaik said. Can cooperatives, if they get generalised across society as a whole, give rise to a society which we call a communist society?

One of the main conclusions of the book goes contrary to a commonly held view regarding this, he said. The book shows that this view, that the cooperative movement necessarily develops contradictions of the kind we find within capitalist society, does not hold for ULCCS, and there is no reason why this view should hold generally.

At the same time, “even if all entities were cooperatively owned, or all entities were owned by the state on behalf of society, but managed by cooperatives, that still would not make it a socialist society. That would still reproduce a number of features of capitalism as indeed Yugoslavia did. Capitalism is not only the private ownership of the means of production, but also commodity production. Commodity production necessarily fragments people, necessarily fragments the working class.”

Prabhat Patnaik recalled an incident to elaborate on the point. “In the late 1970s, after the Emergency, George Fernandes, a leading figure in the anti-Emergency struggle and a leading trade unionist of the time, became the industry minister in the Janata government. Being the new industry minister, he thought he should do something as far as the working class is concerned. So he proposed workers' participation in management of enterprises to be generalised as a rule to be applied across the country. Then this idea was presented to the various trade unions, and to Fernandes's great surprise, Comrade BT Ranadive, who was the President of the CITU, rejected it outright. He said, workers' participation in management in a capitalist setting where enterprises are necessarily fragmented and where commodity production prevails forecloses the possibility of class unity of the working class. As a result he completely vetoed it, and Fernandes was very surprised.”

“[Nevertheless, cooperatives] do represent a forward march, in the sense that they represent a bulwark against the primitive accumulation of capital.”

What we witness today in societies like ours is capitalist production supplanting, assaulting, squeezing petty production, displacing petty producers such as peasants, fishermen, craftsmen and so on. “If they are to remain viable, in the short run, the state must come to their rescue. But, if they are going to remain viable over a longer period of time, then they must be able to obtain the economies of scale, and to introduce the kind of technological changes which are necessary for them to be viable. And this is possible within the context of a cooperative framework. If you, for instance, have harvester combines being introduced in the context of capitalist farming, then they displace labourers. But if you have harvester combines being introduced with labourers' cooperatives owning those combines, then what the labourers lose by way of wage income, they make up by way of profit income, and what is more, while their incomes don't suffer, they actually have greater leisure.”

Where cooperatives are involved in the process of investment, the effects of displacement of peasants could be minimised if, for instance, peasant cooperatives themselves set up industrial projects Patnaik said. “The fact that cooperatives can represent, in the context of a development of socialism, a transition from petty production to higher forms like a socialist society is something which makes capitalism quite strongly opposed to cooperatives,” Patnaik said.

Pinarayi Vijayan said in his speech that despite building large infrastructure projects such as roads, bridges, building complexes and IT parks, and having to compete with private giants, the ULCCS is committed to democratic and egalitarian principles. “ULCCS stands high defying the predictions of mainstream economists for over 90 years,” he said.

“During demonetisation, there was an unprecedented attack on the cooperative sector of this country.... It was we, the LDF government in the state of Kerala who took the fight to the centre on this issue, so much so that even the Supreme Court had to ask why there was so much hostility towards the cooperative sector. We were able to ensure that not even a single rupee deposited in the cooperative banks of the State was lost.”

“The need of the hour is for the state to engage with such public initiatives and to provide support for such cooperatives to defeat the onslaught of unending, profit-driven capitalism, and to expand using all the possibilities that are available to them,” Pinarayi Vijayan said.

In his speech, Thomas Isaac said, “[In the book,] we have tried to explore the significance and relevance of workers' cooperatives in building a left alternative in India, or within a state.”

Mainstream economics, particularly its neoliberal variety, says that there is no alternative to the capitalist firm.

But here is the experience of a cooperative which has existed for 93 years, which has overcome capital constraints and which has proven to be very competitive. It’s turnover is Rs. 500 crore; its capital base, asset value and so on are very large. There are challenges, but it has not degenerated [as mainstream economics predicts].

“This may be an exception, there may be only a few like this. I have no illusion that one by one we'll convert all firms into cooperative firms. But the significance of this experience is that it indicates that an alternative is possible. It is an embryo of a future that is to come.”

“The book examines how it is possible for ULCCS to overcome the capital constraints. There the role of the government would come in a big way.”

“Another question addressed is, how was the conflict between hierarchy and democracy, and between control and participation, resolved? And here we examined in great detail the labour process. How democratic decision-making is consciously introduced in every key sphere. At the same time, autonomy is given to the management so that it can take independent management decisions. I know it is a very nebulous area of compromise, but it has been achieved. It is a very efficient firm. And this efficiency is because of the kind of technological transformation that has been achieved by the Society. It uses the most modern equipment and processes.”

“Now in Kerala, within the federal framework, we are trying to develop a left alternative. Here, the cooperative is a very important form of industrial organisation for the smaller producers. And therefore this alternative involves protection for the credit cooperative system, which contributes to more than one-third of the entire credit that is extended in Kerala. We are going to have a Kerala Bank – a large bank integrating district cooperative unions and the State cooperative bank – which will have the most modern technology, a big capital base… It will provide a very efficient umbrella for primary credit cooperative societies,” Isaac said.

“[Besides,] traditional industries which are facing serious crisis, such as coir and so on, would have to be modernised. But this technological change will take place within the cooperative framework, so that whatever reduction in the job that occurs can be shared. Employment can be shared, while a minimum income and standard of living can be protected.”

“So in sectors like fisheries, coir, cashew and handloom, cooperatives are going to a play a very important role in the alternative that we are putting forward. And it is in this context, experiences like ULCCS, or Dinesh Beedi, and there are a number of cooperatives like this, becomes very very important. Not only for inspiration, but also for learning practical lessons from,” Isaac added.

Rameshan Paleri, the ULCCS Chairman, and Balu G. Iyer, the Regional Director of the International Cooperative Alliance, also spoke at the function.