In the land called hunger 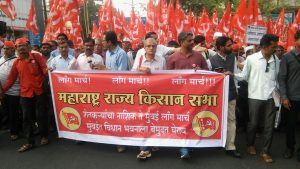 As the kisan rally marched into Mumbai, all eyes were on one man, the CPI(M) MLA from Surgana and Kalwan constituencies. He organised the potable water and food packets. He sent messages to party colleagues in Mumbai and Delhi. Above all, he egged on the 35,000 peasants through personal example, he walked shoulder to shoulder with them. And the peasants marched with him, they trusted him.

Even when the peasants walked through Mumbai at midnight (so as not to trouble students, SOBO office-goers and Mumbaikars), some of them could not keep body and soul together; it was Gavit’s "chala utha Kumbhakarna" that stirred them. And despite no rest on the night of Sunday, they continued the march. And why not? Gavit has worked tirelessly for them in Dindori, Surgana and Kalwan and that honoured him with seven times victory in a row.

A child of the Adivasi movement of the mid-1980s in Charotti Naka in Dahanu, Gavit chiselled his politics to ensure land rights for Adivasis. A former president of All India Kisan Sabha (AIKS), he ensured that out of the 12,000 land claims made by Adivasis under the Forest Rights Act, the AIKS ensured a majority of the claims were accepted by the government.

The Kisan Long March is linked to two decades of nonstop struggle. As Gavit said in his Mumbai speech, "Two years ago, more than one lakh farmers had protested in Nashik. Our 180-km six-day march started after the government did not fulfil their promises."

On 12 March, a written agreement agreeing to the demands was sought. The government has six months to deliver.

Meanwhile the kisans returned to their homes in trains, trucks and tempos – spurning the government’s offer for "a free ride".

Today Surgana is one of the rare Talukas where "the nobodies" have been empowered. Gavit’s strategy was two-pronged: morchas in Nagpur, Mumbai and Delhi plus street marches including a clash with the police in which kisans have been martyred. Other than the rallies and protests, Gavit has mentored the Adarsh Samata Shikshan Prasarak Mandal that ensures outreach among Adivasi children, schools and hostels.

Gavit's rationale when I heard him in Surgana was simple, "The high and mighty people of the world, who practice the terrorism of money. These people are more powerful than emperors and army chiefs, even more than the Presidents and Prime Ministers. Their hands are never muddied or dirtied. They shoot no-one: they applaud the show. But behind-the-scenes everyone works for them. The babus, the international experts, the IT army. This is how they rule our people: they are never elected, but they decide the wage levels plus subsidies for peasants and labourers." At that time someone standing behind him said, soon these governments and babus will penalise the sun rays and tax the raindrops.

This is precisely why the CPI(M) unit in Surgana has worked on the ground, through mass-based people's programs. They initiated a "Doorstep Ration Scheme. Today this has been implemented in two- thirds of the 291 revenue villages in Surgana tehsil. A woman farmer who has walked with her daughters spoke to me at the Somaiya Grounds - "This scheme is our scheme. More importantly, it has reduced large-scale corruption in the PDS."

Dr Bhavna and Dr Nishith, who worked in the primary health centre in Surgana as medical doctors, have combated health inequality and stroven to significantly improve health care. They say, "Jiva Pandu was a people's man. He helped us a lot when we worked in Surgana. He worked nonstop and more importantly he worked for his people. He took care to clear maximum cases of old people."

Gavit has not merely created a lot of awareness about adivasis among the people of North Maharashtra. He has taught them to respect the adivasi and kisan. Even the Mumbai police force who were handed over the monopoly on violence to maintain law and order when the marchers were in Mumbai, know about his work. They whisper among themselves, "He is a good man, he is not like other politicians, ha, aaplya manoos ahe".

The other policemen see how Gavit hands over two bananas, a sugar cake, a water pouch plus a vitamin capsule to the fellow marchers. They decide to help him. And in this way, the struggle continues ...

My first memory of Surgana was in the nineties. I was visiting a primary health centre in the village.

The ST bus from Nashik to Surgana took more than four hours on ramshackle roads.

When I reached the hospital (the only pucca structure that I saw), I saw the patient beds on the grounds, outside.

The general ward had been emptied.

There was a government program. Festoons and buntings and one loud speaker.

Officials made an entry on the makeshift stage.

I heard the speeches.

A conch was blown.

Someone talked about wage structures. They were debating Rs 40 or Rs 50; or god forbid more.

I thought to myself, if farm labour is so cheap, then at these rates, our entire nation is a free trade zone.

On cue, there was a power cut.

Outside on the hospital ground, the horizontal patients were smiling under the starry sky.

I scribbled in my notepad, welcome to Surgana.

Next day I met Baghu Bhau.

I asked him his age.

He told me he is very old, but he is younger than the rivers in the village.

Today those rivers are dry.

There is no water.

How can we grow anything?

Even the gods need water.

Baghu: I’ve to go to the magistrate sir’s office every week. 64 kms. Walking both ways. The case is false. They are doing it to teach our people a lesson.

Me: What happens to your daily wages?

Baghu: On the days I go to court, I can’t work. So, I do not earn any money for four days of the week.

Me: And the rest of the days?

Baghu: The rest of the days, my sons sit and press my feet. If they are not available, I make the calf lie on my feet.

At the local chai shop, I was reading yesterday's newspaper.

Local 1: I need to stitch two uniforms. Seth has told me, stitch a smart uniform.

Local 2: I know a tailor. You remember that lame boy? His uncle.

Local 1: His father was a sugarcane cultivator till he died.

Local 2: Don’t worry, I’ll give Ganna an advance payment. See, the thing is, Ganna will lose his other customers if they know he is stitching for people like us. He has agreed to take your measurements in the forest in the middle of the night. Ok?

Local 2: (starts laughing) You look different in the ID Card.

Then they talked about the dire poverty and gnawing hunger. Who has stayed hungry longer? 72 hours? 96 hours? More? These are the games they play.

I gulped down my tea and walked towards the forest. If only these trees and fields were a bank, the high and mighty would have saved them already.

Ramu Ramanathan is a Mumbai-based playwright