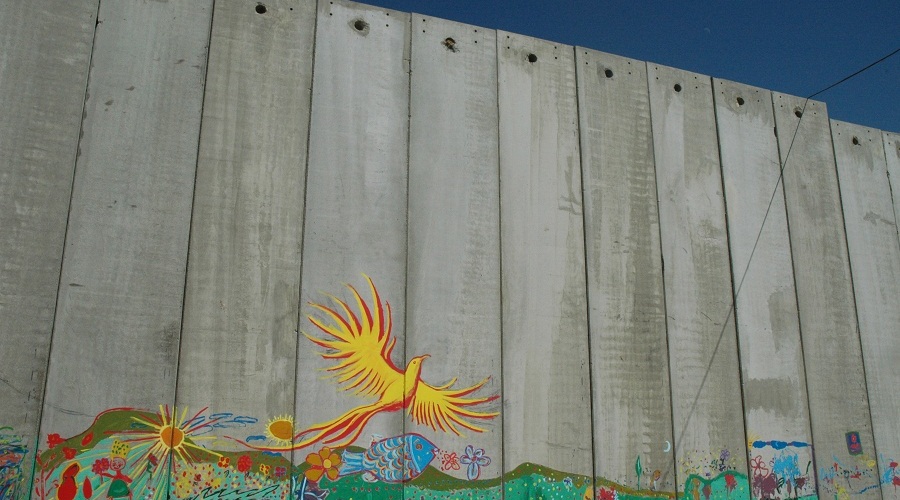 On World Heritage Day, as we celebrate structures people in the past erected, let us remind ourselves of one monstrosity that the world allowed to be built, and allows to remain standing. No amount of spray-paint can sanctify it. We share an excerpt from Githa Hariharan’s essay in From India to Palestine (LeftWord, 2014).

The wall, which Israel has been building despite its being declared illegal by the International Court of Justice, is officially called a Separation Barrier or a Security Barrier. The wall, which Palestinians call the Apartheid Wall, snakes its way across, between and around hills, farms, groves, villages, roads and houses throughout the West Bank, separating people from their neighbours, their schools, their hospitals, their shops, their land, their trees, their crop, their wells and springs. The wall is made of concrete. In places it is supplemented by, or growing into a wall from, electrified fencing, deep trenches, roads for patrol vehicles, electronic ground and fence sensors, thermal imaging and video cameras, unmanned aerial vehicles, sniper towers and razor wire. The wall does not run along the Green Line; it runs through the West Bank, on occupied Palestinian land. The plan is for the wall to be as long as 650 kilometres.

In 2006, the occupation authorities announced that the Wall was not only coming to Walaja, but would encircle it, surrounding the village on all sides.

When I visited Walaja, the farmers began their stories with 1948. Where we stood was not Walaja at all, they said. The original Walaja – on the hill across – was destroyed in the Nakba. Later, an Israeli settlement and park came up on the village land. The expelled villagers of Walaja became refugees in camps, or emigrated. Those who remained moved to the present location, surrounded by settlements. After 1967, Israel annexed what remained of Walaja to the Jerusalem Municipality. And since the late 1980s, various ploys have been used to get those villagers who remain off what remains of their village lands. Houses have been demolished or threatened with demolition; fines imposed; work permits taken away on whim; and people arrested on the pretext that they have West Bank ID cards but live in Jerusalem. And then came the wall, like a continuing Nakba.

The wall is already part of the life of Omar, a farmer I met, and his siblings and their families. But there is worse to come. Slowly, once the court clears it, their house will be surrounded, five metres away, by an electric fence. Cameras will monitor the house. Their only entry and exit point will be a tunnel that is already there – built at considerable cost just for this house. This will be their punishment for not accepting money and leaving the house and lands for the settlers, the wall, and “security”. Security was also the reason given for revoking Omar’s work permit.

Across the hill from Omar’s house, I was shown another house in the distance. Abu Nidal, who lives in that house, used to have a lot of land. Now the wall runs just a few metres from his house: “The Wall came and cut the land in half and destroyed it … there is no land to live off. I planted olive trees there, and they were uprooted. What remains of the trees are beyond the Wall … There is no work in al Walaja …” His parents’ graves are also beyond the wall. With permission, Abu Nidal can visit their graves once a year. “The goal of the Wall is to steal the largest possible amount of Palestinian land. Put down the Wall and all the land behind its path becomes theirs to do what they want.”

Farmers like Abu Nidal are clear about what is happening to them. They are also articulate about what should happen next.

What happened in Tunisia needs to happen here. We need to launch a new Intifada and resist the Occupation. It is the right of all people to uproot Occupation … The people will explode – it comes automatically. Hopefully it happens here. All those conspiring and holding negotiations, sometimes direct, indirect, sometimes with America, they come and go and negotiate, and every hour they think about negotiating … we have a crisis with the leadership … They [the PNA or Palestinian National Authority] pursue any one who even thinks of resisting the Occupation, and arrest him. We don’t have a leadership.*

In Bethlehem, the wall blocks the old entrance to the city from Jerusalem. A house I visited used to be across Rachel’s Tomb, a shrine visited by different communities. The house is now walled in on three sides. The house is called Sumud House; sumud means steadfastness.

If a third Intifada is brewing, the wall is one of the faces of the enemy. In Bethlehem, the wall across the Aida Refugee Camp, which was set up in 1948, has rows of Intifada martyrs painted on it. Part of the wall is burnt; a watchtower with sniper-windows stands charred, testimony to the anger of people in the camp. The graffiti on this part of the wall sends sharp and eloquent messages, and not just to the Israelis: “No one can talk about the camp better than the people of the camp,” says one. An activist spoke to me ruefully about the numerous delegations that visit the wall, spray-paint words and images of solidarity on it. “We tell them to speak to people first,” he said. But many come with their readymade messages; like other genuine causes, this last bastion of colonialism can also be turned into a solidarity cottage industry. …