Remembering Safdar: his life and his legacy as a voice of resistance 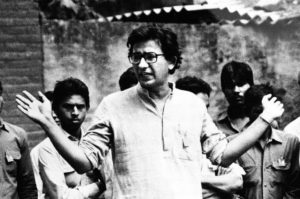 “So you missed the demolition of the Babri Masjid

And the violence and hate that followed
You missed Ramabai and other Dalit massacres
You missed your nation’s love for the atom bomb
In 2002, you missed the Gujarat pogrom
And in neighbouring Pakistan you missed
The creation of the Taliban and here
This year you missed the coronation of killers

We who survived you missed none of these
We missed you.”- Anand Patwardhan

29 years ago, on 1st January 1989, Safdar Hashmi, one of the founding members of Jana Natya Manch (Janam), a theatre artist, a political activist and above all a gentle human being, was beaten up by the goons of Congress while performing a street play in Jhandapur, UP. He succumbed to his injuries and died on 2nd January. A worker, Ram Bahadur, was also killed. On 4th January, Janam, in one of the most significant moments for theatre in India, went back to the same site to finish the play that was halted by the Congress goons. Safdar died at an age of 35. In the current era when the voices of dissent are aggressively suppressed by the establishment, Safdar’s legacy and how he challenged the power centers by taking a medium which was considered elite to the streets, to the people, become vital. Following is a collection of articles, videos, and interviews on Safdar, Janam, and its role in continuing Safdar’s legacy.

Ending this with a video of revolutionary artist Shankar Shailendra's song 'Tu Zinda Hai', which has a compilation of Safdar and Janam's photos in the background.