Five Movements in Praise is a fictional work that brings together images and text. Here, the landscape and the human have equal presence, and the pleasures of the book are not in the fulfilment of narrative expectations, but in the creation of new pathways of desire in storytelling.

"Sharmistha Mohanty is a clear and present example of the writer as caver, her work a descent into rock in pursuit of a shape half known and calling. It's not surprising that her touchstone is the great temple at Ellora. Her reader moves with something of the excitement of the soldier who discovered that series of caves when out hunting, but the author's stance is that of the first sculptor as he paused on the volcanic outcrop to imagine his way down into the living rock. An artist's work has always been to chip away in a mineral darkness, but Mohanty brings to what might have turned an abstract project (the uncovering of a design fully formed in the head), a private tenderness, as she discovers image after image of a love whose emblem is the sexless caress, of lovers leaning out into nothing, of strangers meeting and touching in a mausoleum or in a painted forest."

"A book as vast as the world, as light as breath, as passionate as love, as humble as prayer. Sharmistha Mohanty has written an enchanting book, profound and delicate, a book to which I feel particularly close: life as a journey, to discover oneself and others; the journey as an immersion into a different time, into a present that widens out to embrace the world. A journey in which the self rediscovers the most authentic truth about itself, becoming truly anonymous or concretely universal rather than vainly subjective, as the self always is when it loves, roams, when it watches the shadow descending into the valleys, the ruins of ancient cities and the garbage of modern ones. A lucid and relentless book."

"Sharmistha Mohanty is remarkable above all for her determination to shift the narrative away from the easy urgencies of Western fiction towards a text that hovers between the contemplative and the hypnotic, sculpting extended landscapes of feeling from the quiet friction between realism and myth. To read Five Movements in Praise is like coming across an animal of a new species, but one that immediately appears to be in tune with its environment."

She is on the International Faculty of the Creative Writing MFA programme at the City University of Hong Kong.

She lives in Mumbai. 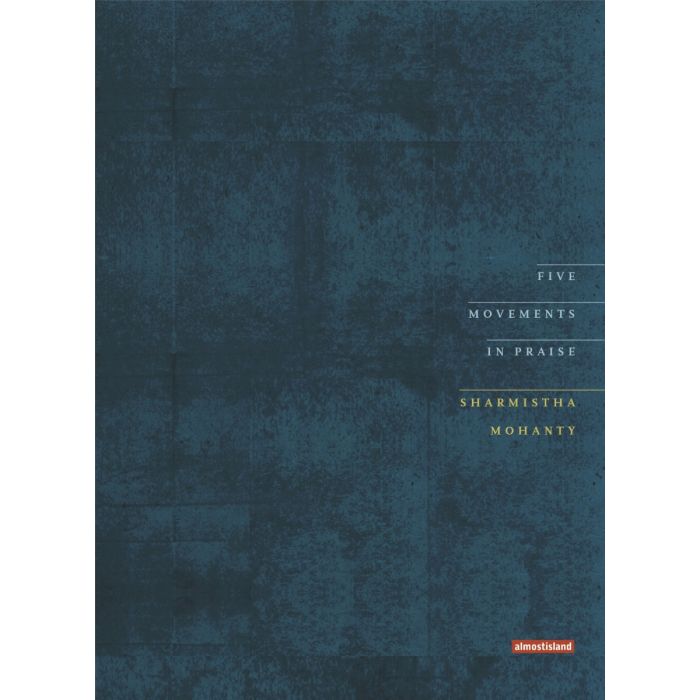