Essays by and for Amit Sengupta

‘Amit Sengupta dedicated his life to people’s causes, and for a just and humane world. Trained as a doctor, he fought for a world that does not profit from illness. Amit was a comrade, a man of science, equally comfortable with theory and practice.’ – Sitaram Yechury

‘Amit was a leader and was central to many of the global activities of the People’s Health Movement. When he said, “You see, it’s like this . . . ,” you knew that you were going to suddenly see the core of the issue with greater clarity. He knew the burning need for political organization to challenge what is happening in health, and beyond health as well, because we are a subset of the bigger system.’ – David Sanders

Amit Sengupta (1958–2018) believed the job of a doctor was not simply to treat a sick individual, but to build a society in which health is a fundamental right of all citizens. In these times of the Covid-19 pandemic, such a perspective is more relevant than ever. The essays in this book trace how Sengupta's work and politics were integral to the history of the health movement, and how this movement evolved from ‘medicines for all’ to ‘health for all’.

Sengupta's work of a lifetime is supplemented and framed by his colleagues in the movement: David Sanders, SP Shukla, Prabir Purkayastha, Satyajit Rath, Sarojini Nadimpally, Indranil, David Legge, Kajal Bharadwaj and many others.

Indranil is a health economist and activist trained in Economics and Public Health. He is associated with the Jan Swasthya Abhiyan. He also teaches Public Health and Development Economics in OP Jindal Global University, Sonipat.

Richa Chintan is an activist associated with Jan Swasthya Abhiyan. She works full time with the People’s Health Movement organization.

HEALTH |
Skip to the end of the images gallery 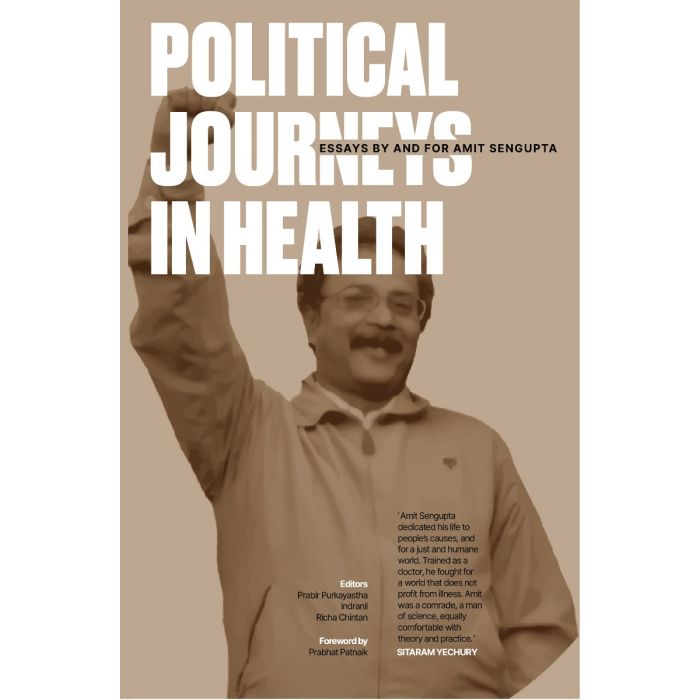