A Menace to India

The Rashtriya Swayamsevak Sangh (RSS) is the most powerful organisation in India today; complete with a private army of its own, unquestionably obeying its leader who functions on fascist lines on the Fuehrer principle. Two of its pracharaks (active preachers) have gone on to become prime ministers of India. In 1951 it set up a political front, the Bharatiya Jana Sangh, which merged into the Janata Party in 1977 only to walk out of it in 1980. In issue was its superior loyalty to its parent and mentor, the RSS; not the Janata Party. Within months of its defection, the Jana Sangh reemerged; not with the name under which it had functioned for nearly three decades, but as the Bharatiya Janata Party, deceptively to claim a respectable lineage.

The RSS is at war with India’s past. It belittles three of the greatest builders of the Indian State – Ashoka, the Buddhist; Akbar, the Muslim; and Nehru, a civilised Enlightened Hindu. It would wipe out centuries of achievement for which the world has acclaimed India and replace that with its own narrow, divisive ideology.

This book is a magisterial study of the RSS, from its formation in 1925 to the present day. With scrupulous and voluminous evidence, one of India’s leading constitutional experts and political analysts, A.G. Noorani, builds a watertight case to show how the RSS is much more than a threat to communal amity. It poses a wider challenge. It is a threat to democratic governance and, even worse, a menace to India. It threatens the very soul of India.

And yet, despite its reach and seemingly overwhelming political influence, the author shows that the RSS can be defeated. The soul of India can be rescued. 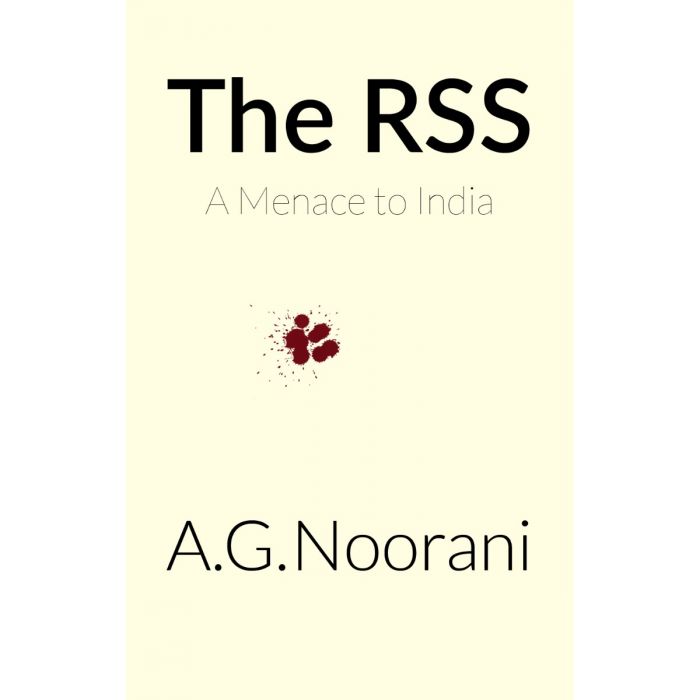 [T]he most comprehensive one-volume history of the RSS to date.

Magisterial . . . Noorani emphasises that the notion of the RSS being a mere "cultural organization" – an image the RSS itself likes to project – is utterly false and misleading, even though it does not enter the electoral fray directly like other political parties. In fact it has always had a political agenda, which is of constructing a Hindu Rashtra.

After reading this volume, you would well grasp what dangers lie ahead.

25 well-written chapters, which examine why and how the RSS came into existence, its role during the British days, and how it has operated and expanded in modern times to challenge – directly and indirectly – the secular polity of India.

Noorani provides a forceful critique of the RSS, supported by a mass of evidence and argument.

With an exhaustive compilation of quotes, news clippings from reputed publications, snippets from well-received tomes, Noorani’s incisive commentary and an appendix section comprising correspondences of RSS leaders with the government, ‘The RSS’ is an essential read for those interested in knowing more about the organisation’s checkered history, its relation with BJP and its fascist ideology.