In 1948, Israel was created on Palestinian land. Palestinians lost their homes and villages; huge numbers were expelled; they became refugees elsewhere or in their own land. In 1967, the West Bank and Gaza were also occupied by Israel.

For more than five decades now, Palestinians have suffered the violent and unjust realities of occupation. Not only does India have strong historical ties with the Arab world; but also the Indian freedom movement saw the struggle of the Palestinians for a homeland as a genuine struggle against colonialism. Both Gandhi and Nehru expressed this in no uncertain terms; so, later, did the non-aligned movement. Indian policy towards Palestine shifted radically in the 1990s. Israel has now become a major supplier of arms to India; it is also part of the complicated shift in India ’s relationship with America, and India’s emerging vision of itself in the world.

Githa Hariharan's work includes novels, short stories, essays, newspaper articles and columns. Her first novel – The Thousand Faces of Night – won the Commonwealth Writers' Prize in 1993. Since then, she has published the novels The Ghosts of Vasu Master, When Dreams Travel, In Times of Siege, and Fugitive Histories, a collection of short stories, The Art of Dying, and a book of stories for children, The Winning Team. For more on her work, see www.githahariharan.com. Githa Hariharan is a member of the Palestine Solidarity Committee in India, and a convenor of the Indian Campaign for the Academic and Cultural Boycott of Israel (InCACBI). 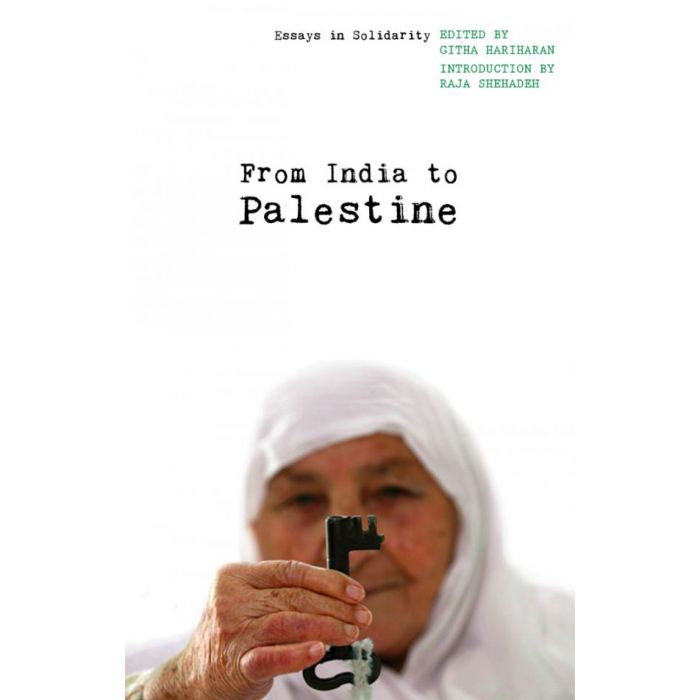 These fine essays . . . express courage and heart, but there is much more that is invaluable – there is information, there is analysis, and there is constructive direction.

These scholarly and committed essays allow us for the first time to consider the issue of Palestine outside the hopeless western frame of mind.

With India's growing strategic cooperation, increasing trade relations and newfound military partner in Israel, readers are left with a vivid image of the extent to which India is complicit in assisting the Israeli state maintain occupation and oppression. . . . Provides a varied and nuanced understanding. . . . Leaves readers with questions to ponder over, such as whether there is a connection between the rising tide of 'NGOisation' occurring in Palestine and decreased political activism and mobilisation; how do LGBT politics and the practice of 'Pinkwashing' relate to the conflict . . . A call for global solidarity with the people of Palestine.

Writers are not soldiers but their weapons are often more effective. Githa Hariharan, a member of the Palestine solidarity committee in India has been instrumental in producing this collection of essays. From India to Palestine is not just a collection of essays though, it is a historical narrative of a principled honourable position of the great modern state of India, its founders, ideologues and leaders gone bad. The essays provide historical and analytical knowledge that is not found anywhere else easily. The book's goal is to inform, yet it is also a call for action.