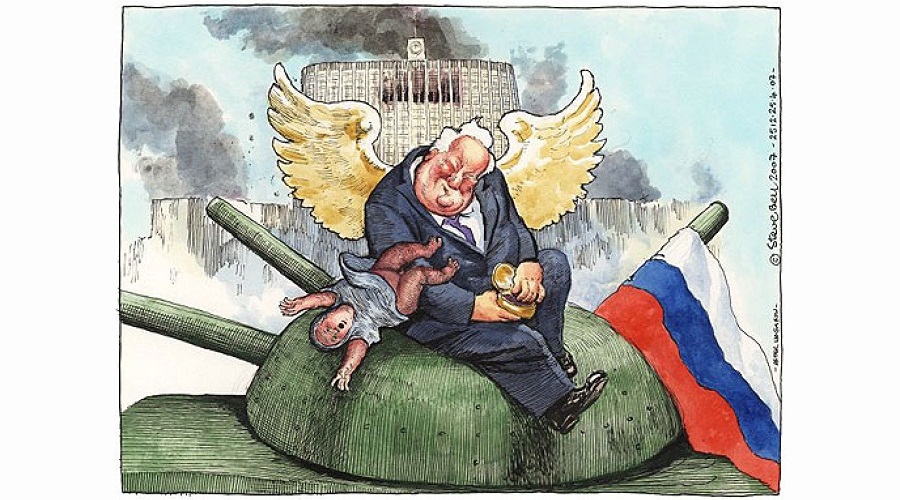 The 9th of May was celebrated in the Soviet Union, as it still is in the Russian Federation, as Victory Day – victory against the Germans in the Second World War, that is. It was indeed one of the most important events in modern history. Who knows what the world would have looked like otherwise! The collapse of the USSR – the nation that sacrificed 27 million of its own to liberate the rest – nearly 45 years later has been thought of as inevitable. But was it?

Carlos Martinez traces the history of the Soviet collapse in The End of the Beginning: Lessons of the Soviet Collapse (LeftWord, 2018; also available as an ebook). In the penultimate chapter of his book, he looks at how scavengers from the imperialist world, facilitated by corruptor-in-chief Boris Yeltsin, descended on the collapsing state to devour what was left of it.

Question: What did capitalism accomplish in one year that communism could not do in seventy years?
Answer: Make communism look good.
– A joke circulating in Russia in 1992

With the burden of Gorbachev’s social democratic fantasies lifted from his shoulders, Yeltsin went to work on behalf of his major constituency: the most corrupt and unscrupulous sections of the Russian nouveau riche, along with US finance capital. The goal was to totally wipe out the economic foundations of socialism and create a fully liberalized economy where capital would be free to reproduce without fear of restriction or regulation; an economic environment purpose-built for foreign investors, speculators, bankers and gangsters.

But, as Gregory Isaacs put it, ‘a rich man’s heaven is a poor man’s hell’. The welfare state was all but wiped out. The neoliberal economic advisers hired by Yeltsin – led by Jeffrey Sachs – mandated an end to price controls, meaning that the prices of even the most essential commodities skyrocketed overnight. Unemployment went from practically zero to over 12 per cent within a few months. Asset-stripping reached dizzy new heights. Privatization, deregulation and corruption were the order of the day, as production, government spending, earnings and even life expectancy plummeted. In the first half of the 1990s, male life expectancy dropped from 65 to 57 – an unprecedented fall in any context other than full-scale war.

As funding dried up, the healthcare infrastructure collapsed, and the peoples of the former Soviet Union were subjected to epidemics of poverty-fuelled diseases not seen for many decades. The Los Angeles Times reported in 1994, ‘Azerbaijan has had a tenfold increase in measles, Uzbekistan suffered an outbreak of polio and typhoid fever has reappeared in Russia. Tuberculosis and syphilis are widespread, and the incidence of such children’s diseases as whooping cough and German measles has increased sharply’. Russia witnessed its first cholera epidemic since the 19th century.

In the first few years following the collapse of the Soviet Union, Russian GDP and industrial production both contracted by more than 40 per cent. As David M. Kotz and Fred Weir note [in their book Revolution From Above: The Demise of the Soviet System, 1997], ‘By comparison, in the United States the four-year economic contraction in 1929–33, which brought the American economy to the low point of the Great Depression, entailed a decline in gross national product of 30 per cent.’ Needless to say, wages followed suit, and the Soviet people started to suffer serious poverty for the first time in many decades. According to a World Bank report on the ‘transition economies’ (all the former socialist countries of Central Europe, Eastern Europe and Central Asia), the number of people living on less than four dollars per day increased from 14 million in 1989 to 147 million in the mid-1990s. In Russia this corresponded to an increase from two per cent to 44 per cent; in Ukraine from one per cent to 63 per cent; in Central Asia from 6.5 per cent to 53 per cent.

It took around 15 years for Russian GDP to recover to 1990 levels – during which period China’s GDP increased by around 300 per cent. Even after GDP had returned to 1990 levels, the obscene levels of inequality meant that millions of Russians still lived with a level of poverty that had not been seen in the Soviet Union since the Second World War. New problems emerged, most noticeably homelessness (including youth homelessness), drug addiction, social alienation and prostitution, all of which remain endemic in Russia today.

[…] The Soviet collapse also had a disastrous effect on cultural and social life. …

With widespread poverty and yawning inequality came xenophobic scapegoating, violent crime and domestic abuse. No wonder a majority of Russians regret the collapse.

Ironically, even some leading Western journalists now recognize that socialism offered a far better deal for ordinary people than neoliberal capitalism. Adam Taylor, writing in The Washington Post in 2016, admitted,

The planned economy of the vast Soviet Union offered financial stability. In the immediate aftermath of its 1991 crash, it quickly became apparent that Russia’s new market economy would offer a rocky ride. Economic reforms quickly had a harsh effect on general living standards. The rouble became almost worthless. Corruption was rampant. A deeply flawed privatization programme helped put much of the country’s economy in the hands of an entrenched and often shady oligarchy.

It is now widely believed that US-led finance capital knowingly directed the post-Soviet Russian economy into disaster so as to: 1) thoroughly wipe out the economic roots of socialism by replacing it with gangster anarcho-capitalism; and 2) to prevent the Russian Federation from becoming a serious competitor to US post-Cold War hegemony.

Yeltsin in power confirmed what every thinking person suspected: he had not the slightest interest in democracy. The brutal neoliberalism imposed on the Russian people could never have enjoyed popular legitimacy – how then to win widespread support for the dismantling of social welfare and the transfer of the state’s assets to a bunch of bureaucrats and crooks? Therefore, a corrupt, plutocratic political system was installed that openly favoured the enormously wealthy and that actively excluded the poor. In stark contrast to their role during Soviet times, trade unions were barred from political activity. Pro-communist and anti-Yeltsin media were routinely banned.

By autumn 1993, Yeltsin was facing serious opposition even within the Russian parliament, a majority of whose members were appalled by the results of the neoliberal ‘reform’ and Yeltsin’s use of extraordinary executive powers to push his programme through. A constitutional crisis arose when Yeltsin decided to put an end to the pesky parliamentary opposition by dissolving the legislature (unconstitutional dissolution seems by this point to have become something of a habit). The parliament responded by denouncing Yeltsin’s actions, impeaching him and declaring Vice President Aleksandr Rutskoi acting president. The crisis was only ‘resolved’ when Yeltsin ordered the army to storm the Supreme Soviet and arrest the parliamentary leaders that opposed him. Quite the democratic transformation. …

[I]n 1996, the Russian presidential elections were almost certainly fixed – with backing from the United States – so as to maintain Yeltsin in power at the expense of the Communist Party candidate, Gennady Zyuganov.

Yeltsin had portrayed himself as the ‘father of Russian democracy’; he turned out to be its leading assassin.

The destruction of socialism in the USSR … inflicted terrible damage on all peoples of the world and created a bad situation for the Third World in particular.
– Fidel Castro

The importance of the USSR’s role as a counterweight to US/NATO imperialism was made achingly clear by the series of imperialist wars that took place during and after the Soviet demise. Symbolic of this shifting power balance is Saddam Hussein’s misplaced hope in early 1991 that Gorbachev would act to restrain US warmongering against Iraq. The Soviet Union was supposed to be a great power, a longstanding ally of Iraq, with its Armenian borders extending to within a couple of hundred kilometres of Iraqi Kurdistan. Gorbachev’s government did nothing to protect Iraq from invasion by a predatory imperialist power on the other side of the world. It is rather difficult to imagine Stalin or Brezhnev presiding over such a mockery.

Horrifically destructive US-led wars soon followed in Yugoslavia, Afghanistan, Iraq (again), Libya and elsewhere. The campaign to destroy Syria’s independence continues to this day. Without the existence of a socialist bloc in Europe, many states were left with no option but to swallow the brutal logic of neoliberalism, or what Samir Amin called ‘the system of generalized monopolies’. Countries unwilling to play ball were subjected to the threat of violence. In the case of Yugoslavia, Afghanistan and Iraq, threat was converted into genocidal reality.

The balance of power in the world changed sharply, with the overwhelming majority of European socialist states being replaced by right-wing governments and incorporated into NATO (despite the promises made by the US and West Germany that there would be no eastward expansion of NATO). The economic crisis occasioned by the Soviet collapse also led to the demise of socialism in Mongolia.

With China yet to become the economic powerhouse it now is, underdeveloped countries in need of investment were left with no choice but to look to the United States, the Bretton Woods institutions and to commercial lenders. As a result, ‘structural adjustment’ became the order of the day, and many poorer countries were forced to accept the full neoliberal package of privatization, liberalization and austerity on a grand scale in exchange for loans that were needed to avert acute crises. Of the remaining socialist countries, Cuba, Vietnam and DPR Korea suffered particularly badly as a result of the sudden disappearance of the Soviet Union (and its friendly trade terms). It is a testament to the remarkable courage, creativity and vision of the Cuban, Vietnamese and Korean people that those countries have recovered from the shock of the early 1990s.

The collapse of the Soviet Union and European socialism could reasonably be described as the worst defeat suffered by the global working class in its history. It gave a lifeline to imperialism and set back the cause of human liberation by several decades.

The featured image is an illustration by the famous English political cartoonist Steve Bell on the legacy of Boris Yeltsin. It appeared in The Guardian.