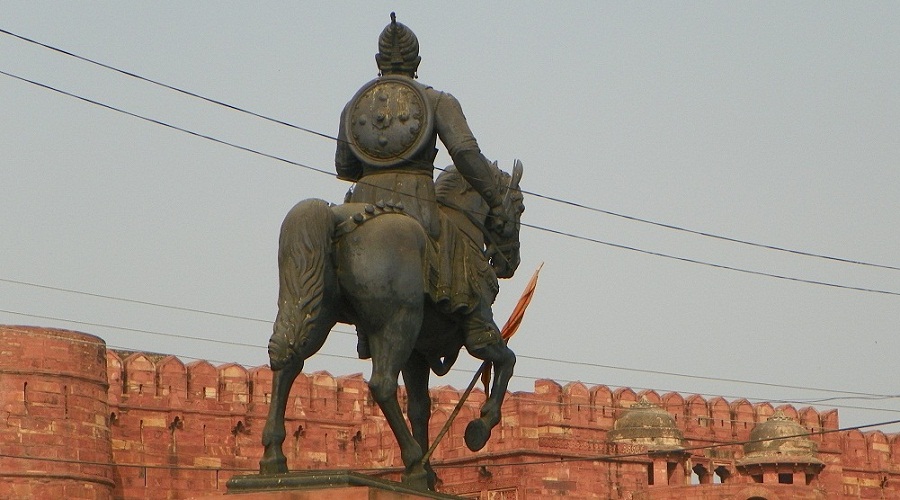 Shivaji appears in the popular imagination as a ‘Hindu’ king, among the many who resisted Muslim rule in India. Govind Pansare’s Shivaji Kon Hota? interrogates the legend to separate fact from fiction. In this extract from his introduction to the English translation (Who was Shivaji?, LeftWord, 2015), historian Anirudh Deshpande, while discussing the merits of Pansare’s book, questions the anti-Muslim aspect of the Shivaji myth.

In Pansare’s terse and admirable book, readers will find a delectable amalgam of the Marxist and Dalit-Bahujan perspectives on medieval Indian history, though the late Communist possibly did not share Phule’s perception of Shivaji as an anti-Yavana warrior if the word Yavana is understood to mean Muslim. On the other hand, if Phule’s use of the term Yavana is interpreted as a reference to the savarna Aryan outsiders who were the real oppressors of the shudras, then it would not be wrong to consider Pansare in agreement with him. From this mixture of Marxist and Bahujan historiography, Shivaji emerges as an organic ruler of the common people of Maharashtra, broadly called the peasantry or the shudras. Pansare’s intellectual debt to Phule is illustrated in the following quote:

Shivaji turned the commoners into great people. They, in turn, made him a great king. Both came together to fulfill a tremendous task.

Shivaji Kon Hota? questions the Hindu communal appropriation of Shivaji as an anti-Muslim Hindu Raja not by portraying Shivaji as a modern secular ruler but by underlining the fact that Shivaji was a Hindu Raja but being a Hindu Raja in the nineteenth century did not necessarily mean being a Hindu communal ruler dedicated to the destruction of Islam. How else is the employment of Muslims in large numbers by Shivaji in his navy and other services to be explained? If Shivaji was committed to the extirpation of Islam in India why did he get Afzal Khan buried with full military honors after slaying him in 1659 and sanction funds for the upkeep of his tomb? Shivaji treated Muslims and Islam with respect and was not averse to establishing relations with those Hindus who had converted to Islam and wished to re-convert to Hinduism; no Nazi-style final solutions to the fluidity and co-existence of religious identities were to be found in the seventeenth century. Religion was important to pre-colonial Indians like it was to all pre-modern societies in general, but unlike sixteenth-century Europe, the wars of religion were not to be found in India.

There are numerous questions which make the annexation of the memory of Shivaji by communal historiography to the cause of communal politics problematic. Conceptually speaking, if communalism was absent in medieval India how could the majority of Indian rulers have been communal? Shivaji’s attitude even towards the Europeans was not governed by a frog-in-the-well approach which is the hallmark of religious nationalism. He was happy to take Portuguese assistance when it came to developing his artillery and building his forts. Even the sword which he is said to have used regularly was forged by the Portuguese whose military reputation in India during the seventeenth century was quite high; Pansare dilates a little on this in the context of the Goddess Bhavani myth associated with Shivaji’s sword. In the light of these facts it is perhaps apt to describe Shivaji as a kind of “equal opportunity employer” in the seventeenth century.

In matters of statecraft Shivaji can be compared with Frederick the Great of Prussia who once famously declared that he would welcome the Turks and build them their mosques if they proved valuable to the Prussian State. Many questions arise in relation to the Maratha-Muslim military and administrative relations which were important to the history of the Deccan in the eighteenth century. Muslims fought in large numbers in the “Maratha” armies during the seventeenth and eighteenth centuries only to be exiled from Maratha history due to the painstaking efforts of the modern historians of Maharashtra during the colonial period. The Shaniwarwada, the intrigue ridden palace of the Peshwas in Pune, was garrisoned by the Gardis — the European trained Afghan Guard Battalion. The Marathas fought and negotiated with the Nizam over the subedari of the Deccan without speaking of establishing a Hindu Pad-Padshahi in the region. The Maratha-Muslim military co-operation continued in the nineteenth century and was demonstrated in the desperate resistance offered to the British by the Afghans in the service of the Rani of Jhansi from within the besieged Jhansi fort in 1857. Shivaji Kon Hota? recounts the role which numerous Muslim commanders played in Shivaji’s armed forces. There were at least 13 major Muslim commanders or soldiers in Shivaji’s army: Siddhi Hilal, Daulat Khan, Ibrahim Khan, Kazi Haider, Siddi Ibrahim, Siddi Wahwah, Noorkhan Beg, Shama Khan, Hussain Khan Miyani, Siddi Mistri, Sultan Khan, Dawood Khan and Madari Mehetar.

Shivaji Kon Hota? questions the way in which dominant Maratha historiography has enforced modern, i.e., colonial and post-colonial, religious categories on a past where people lived and did things differently compared with the age of modernity. Readers will not fail to notice the ease and humility with which the late Govind Pansare has raised and answered these questions. He does not claim originality, but only the ability to rationally re-interpret the facts of Shivaji’s career, for facts do exist — despite the claims of contemporary intellectual fashion to the contrary. Shivaji Kon Hota? shows how, with the help of reason, anyone can interrogate the past. We need not be scientists and historians to discover and understand ourselves by questioning the familiar tropes of history.