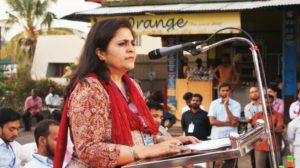 Here's the transcript of the interview:

For the past two years I have been editing Teesta Setalvad's memoirs. The reason, we at Leftword, were very excited about this book is that during the summer of 2013 and into 2014, there was a demonization of Teesta in the media, mainly by BJP politicians. One heard about a person called Teesta that those of us who worked with her couldn't recognize. We thought that it’s important for her to tell her real story so that the Teesta we know, the real Teesta, can be understood by people and can be understood for the very important work she has done; Not only with regard to the program of 2002 in Gujarat and its aftermath, in other words the search for the justice for the survivors and the victims of 2002, but before that in anticipation of 2002. She did some important intellectual and journalistic work with communalism combat to reveal the kind of lineages that led up to 2002. This is the Teesta that we wanted to present to the readership. I think it is not only going to be greatly interesting to people to understand who Teesta is but, also it's a very interesting account of a young person becoming political.

On what touched him on a personal level in the book:

The thing which really got me personally in the book is the story of how somebody from a background of reasonable privilege, somebody who comes from a position where their path is laid out before them is struck by the inequities and the violence in the world around her. It is then, she decides to take a path different from the path which was foreseen for her. She writes quite movingly about the decision to take this other path and how she was able to see with eyes different than perhaps, if she had become a mainstream lawyer or a mainstream journalist. She writes quite honestly about coming to the terms with the world she lives in and trying to improve that world.

Has something of her current struggle against the machinery of the state come into the book?

The government of India has been unrelenting in putting the pressure on Teesta and her husband, Javed Anand. It’s been a non-stop barrage against them and the work they do. There’s a great deal of stress in some of the prose when she writes about this period. Interestingly, the book flows beautifully when she writes of her childhood, her college years, her years of documenting injustice after the Bombay riots of 1993. That prose is very even and beautiful. But, when she comes to the present, you can see how difficult this has been for her, and for her family and for the work she has been doing. One of the interesting feature of this book is that even at the level of the prose, there is an impact of this government’s attack upon here.

Expectedly, the book has been drawing bouquets

In a review, the Firstpost says of the book

The strength of Setalvad’s memoir lies in her skill of pointing out small but crucial details of the massacre which were apparently overlooked by the Special Investigation Team probing the Gujarat violence — packets of a white chemical substance used by the mob, and the LPG gas shortage in Ahmedabad because gas cylinders were deployed by attackers in Naroda and Gulberg. It is these all but forgotten aspects of the riot that go some way in capturing a crucial era of Indian history, and it’s through them that Setalvad shows us how violence has marred and vitiated the country she grew up in.