To See the Dawn: Women and Communism 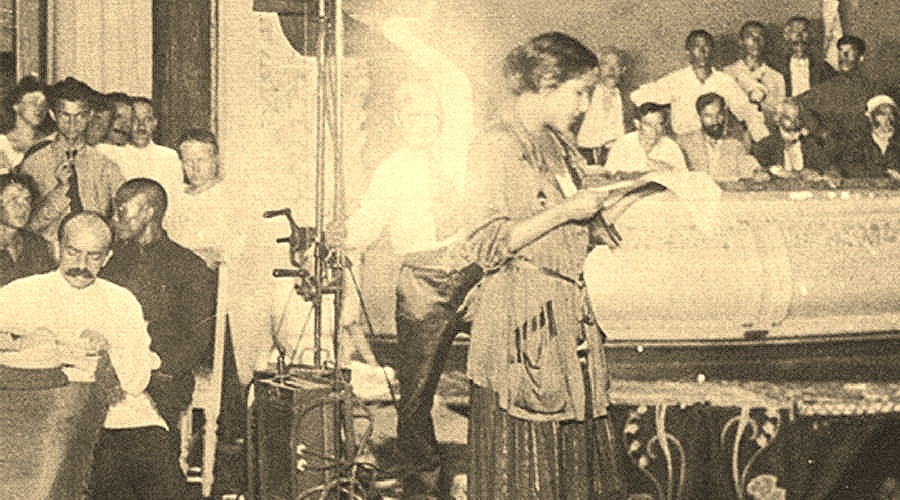 The protests at Shaheen Bagh (stalled for now, to help contain the spread of COVID-19), were essentially led by women. They were there to challenge not just an illegal legislation, but a world that all but literally keeps them shackled, that tells them their place at home and outside – if allowed to venture there. If you think that you’ve broken free from such a mindset – especially if you aren’t a woman – by virtue of being ‘liberal’, ‘progressive’, or even ‘socialist’, the following extract from Vijay Prashad’s Red Star Over the Third World could make you question your certitude. Taken from the chapter titled ‘To See the Dawn’, it is sure to make many among us uncomfortable.

It could not have been easy for the Turkish communist Naciye Hanim, a teacher from Istanbul, to stand up in the Congress of the People of the East in 1920. The meeting was in Baku, which had established itself – along with Tashkent – as one of the hubs for Eastern communism. Hanim was one of the few women at the Congress, despite the efforts of the Comintern leadership. There were only 55 female delegates in the room of 2,000 delegates. Nonetheless, the Comintern ensured that two women took their seats alongside two men as joint chairs and three women won election to the presidium. Women need to overcome the ‘despotism of men’, the delegates were told by the Comintern representatives, as much as the despotism of capital. It was a firm message to a room of people who were not entirely eager to agree.

Hanim warned the delegates that ‘however sincere and however vigorous your endeavours may be, they will be fruitless unless you summon the women to become real helpers in your work’. She did not mollify her views. ‘People who view the fact that women are making up with their labour for the shortage of beasts of burden as contributing to the cause of equal rights for women are unworthy of our attention.’ Many in the hall would have been stung by her comments, if they bothered to listen.

The organizers placed Hanim’s speech on the last day. It was late. People were restless, eager to go home. ‘Many violent speeches were made’, wrote the British informer, ‘but the general effect was in many cases spoiled by large numbers of Moslem representatives going outside to say their prayers’. A delegate warned – along the grain of Hanim’s warning – that ‘we were not able to immediately form all our customs and conditions of life into a communist framework’. The East, he said, is ‘completely different, its interests are completely different, from the West’. The West was not so different, as the Bolshevik leader Alexandra Kollontai had been suggesting in her many writings on the importance of women’s emancipation. But the East was no paradise, as Hanim made clear.

Hanim’s list of demands bears consideration, for it could very well be a radical list even today:

Hanim was not an idealist. She took life by the throat and demanded more of it. ‘True, we may stumble in pathless darkness, we may stand on the brink of yawning chasms,’ she closed her comments lyrically, ‘but we are not afraid, because we know that in order to see the dawn one has to pass through the dark night.’

Hanim had allies in Moscow, particularly in the Zhenotdel (women’s department). The year after the Baku conference in 1920, Alexandra Kollontai, then head of the Zhenotdel, wanted to convene a Congress of Eastern Women to put demands such as Hanim’s on the table for Soviet policy. At the Second International Conference of Communist Women held in Moscow from June 9 to 14, 1921, the discussion on ‘Eastern women’ was vibrant. The Conference’s final resolution called upon the Party and all state institutions in the Soviet East to ‘wage a struggle against all prejudices, moral and religious customs oppressive to women, conducting this agitation likewise among men’. The main instrument to raise the ‘cultural level of the populace’ would be to fight to build unions of women – ‘clubs of women workers’, where the ‘clubs must be centres of cultural enlightenment – institutions that demonstrate through experience what women can achieve through their own initiative for their emancipation (the organization of nurseries, kindergartens, literacy schools under the auspices of the clubs, etc.)’. In the Soviet East, the proletarian women must be organized into trade unions and unions of housewives, as well as be given the courage to fight for the implementation of equal rights enshrined in Soviet legislation. ‘The particulars of everyday life of the peoples of the East’ must be respected, noted the resolution. This meant that the struggles must not be conducted in a racist and self-righteous way but must put the women of the East at the forefront to fight for a revolution of their own cultural worlds.

Kollontai, as head of the Zhenotdel, along with Lenin and Alexander Shlyapnikov felt that the conclusions of the Second Conference of Communist Women suggested the need for a special Congress of Eastern Women. After an acrimonious politburo meeting in August 1921, which raised the issue of this Congress but then voted against it, Kollontai reproached Lenin about the disorganization of the government and the negative effect this had on the Zhenotdel. Kollontai wrote of her frustration, ‘In the winter we planned three times to have an Eastern Congress [of Women] and three times it was cancelled, in agreement with [the Organizational Bureau], and I was not informed, and Zhenotdel was not notified of the cancellation!’ Kollontai felt hemmed in by the conservative views held by some members of the Soviet leadership. Stalin was particularly brusque. When asked about the need for a Congress of Eastern Women, Stalin said, ‘What for? Why drag women of the veil here? We will have too many problems to deal with. The husbands would protest. It’s too early. Who wants their affairs to be examined?’

A Conference of Eastern Women was, nonetheless, held. It was mainly about women in the Soviet East. The Conference’s sense was that ‘work among Turkic women to date has not been sufficiently developed’. Local party committees were asked to focus their ‘serious attention’ on work amongst women. The Conference suggested that women of the East must be organized into trade unions and into various clubs. The main point raised by Kollontai, by Hanifi Burnashev (a Tartar leader who was by then secretary of the Ferghana party) and by Mirsaid Sultan-Galiev was to work carefully amongst the people,

Communist education of the women’s masses by using all types of agitation and propaganda of the idea of communism and the practical participation of women in Soviet construction: all of these activities can be conducted successfully if representatives of the working people’s masses themselves of the peoples of the East are recruited for the actual work. Women’s departments must guide the work of young functionaries from among the communists of the Peoples of the East, while listening closely to all the practical recommendations they make on the basis of experience and knowledge of the milieu, as well as by helping to implement them.

In Central Asia as a consequence, local Bolsheviks set up local chapters of the Zhenotdel in Bukhara (1923) and Khiva (1924) as well as set up women’s clubs in Ferghana (1925). In February 1925, the Presidium of the Central Executive Committee of the USSR affirmed the ‘rights of women of the Soviet East’. In the Soviet East, the Zhenotdel’s leadership moved a rigorous agenda against traditional forms of oppression, such as polygyny and women’s seclusion. The struggle was not easy. The local parties and radicals – mostly comprising Central Asians – were caught between denouncing religious fanatics as well as ingrained customs, and facing a rebellion against Soviet policy led by the traditionalists. …

Featured image: Naciye Hanim at the Congress of the Toilers of the East, Baku (1920). Courtesy: La Chaux-de-Fonds Métropole Horlogère (Switzerland).