The Journey of ‘Halla Bol: The Death and Life of Safdar Hashmi’, Part 2 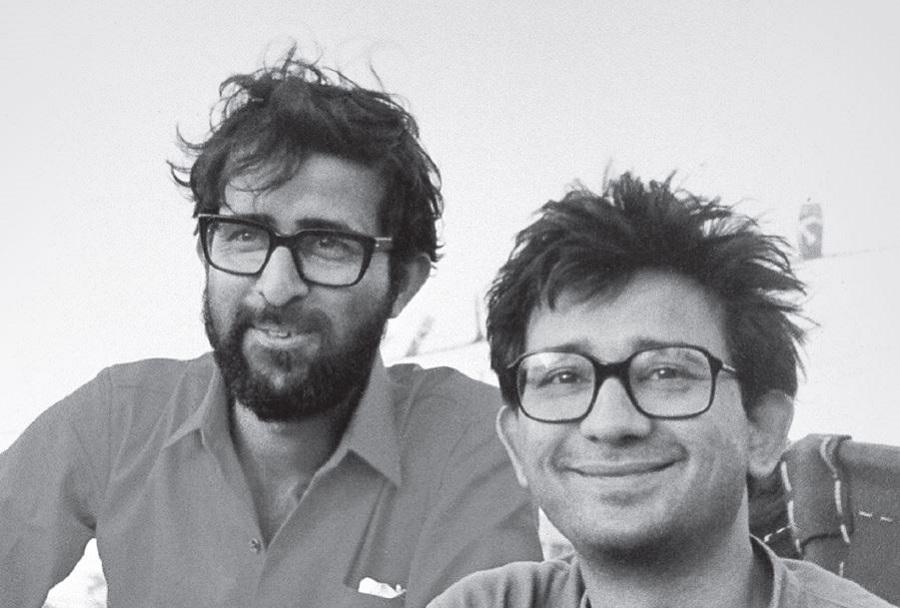 As the book begins to take shape, as much in the author’s mind as on paper, we keep satiating our curiosity with these highlights from the life of Safdar – actor, activist, man of letters.

The last few days, I’ve been writing about the experience of working with Habib Tanvir for my book on Safdar Hashmi. The play was Moteram Ka Satyagraha, based on a story by Munshi Premchand. The Inspector of Entertainment suggests that the Viceroy’s visit to Banaras culminate with an evening with the famous courtesan Chamelijaan. When we started rehearsing it on the floor – with Safdar as the bumbling Magistrate, Mala as an utterly seductive Chamelijaan, myself as the hyper-energetic Secret Agent Three-Nought-Three – the scene kept expanding, with both Safdar and Habib sa’ab coming up with more and more hilarious twists and turns. As Habib sa’ab later wrote: ‘The scene was exceedingly funny. Actually Safdar himself had advanced some most obscene suggestions during the rehearsals to enhance the comic effect, which I had lapped up. Safdar had a brilliant sense of humour.’ Mala was stunning – sexy, playful, free, completely in control of her sexuality and of the narrative in the play itself, with her tingling laughter filling the auditorium. Safdar played the awkward, excited, smitten Magistrate, all hands and legs, to perfection. They were electrifying on stage – she, a trapeze artist, throwing herself at the role with abandon but always in supreme control; he, a comic maestro, each ungainly stutter, twitch, and jerk pitched just right, neither overdone, nor underplayed. 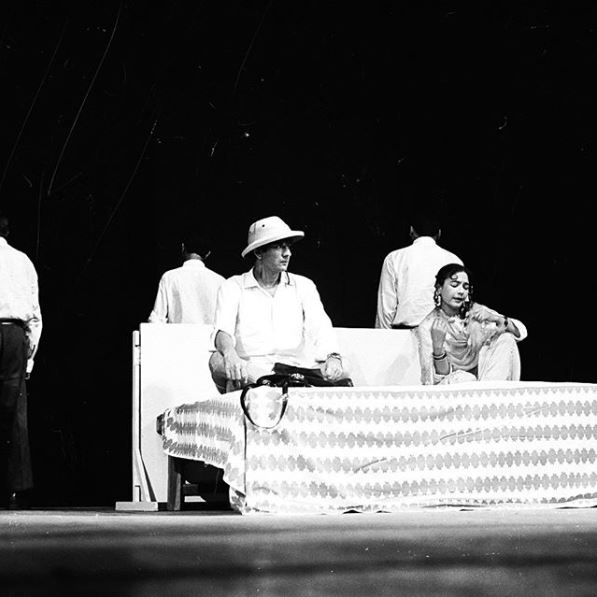 Notes for my book on Safdar Hashmi. On December 18, 1986, I walked with 30,000 others through the streets of Delhi in what was called the People’s March for Communal Harmony. It was organised by the Committee for Communal Harmony, in which Safdar was probably the youngest member. In this photo, he stands in front of the Committee posters with his comrade and friend, Pushi Grewal. The Committee held over 20 large public meetings; over 150 street corner meetings and padayatras; apart from meetings in schools, colleges, and office complexes. The Committee sold about 20,000 badges with the interlocking three-hands logo; distributed 10 lakh (1 million) handbills; and pasted over 40,000 posters in the four major languages of the city: Hindi, Urdu, Punjabi, and English. The Committee organised at least 15 screenings of M.S. Sathyu’s classic film Garam Hawa, Janam did several shows of its new play, and Parcham sang at numerous places. Nearly one thousand school children from 39 schools took part in a painting competition. Several eminent artists took part in a poster-making workshop, and more than eighty top artists donated their works to raise money for the campaign. The auction raised about Rs 2,40,000, a very substantial sum back then. The brochure for the march included greetings messages from the President of India, Giani Zail Singh; Chief Justice of the Supreme Court, P.N. Bhagwati; and the vice-chancellors of Delhi University, Jawaharlal Nehru University, and Jamia Millia Islamia. 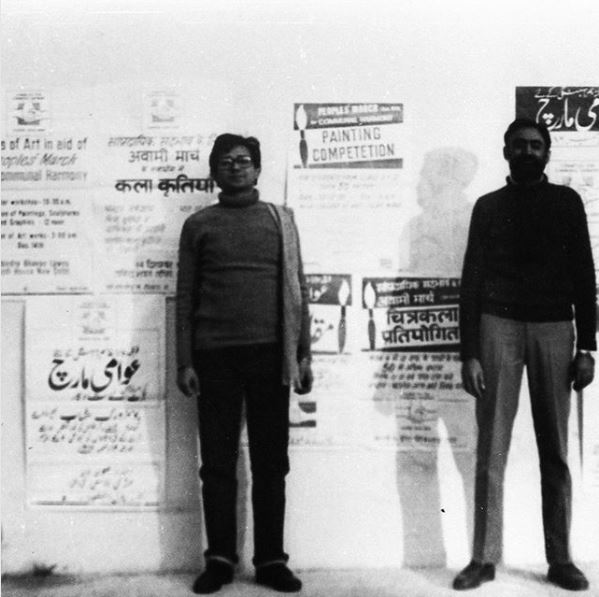 Notes for my forthcoming book on Safdar Hashmi. In 1988, when Habib Tanvir directed for us Safdar’s adaptation of a short story by Premchand, we were lucky to have the legendary Zohra Sehgal act with us for the first two performances. After working for eight years with Uday Shankar and fourteen years with Prithviraj Kapoor, Zohra Sehgal had lived in England for a quarter-century working mainly in television, and had faded from public memory in India. It was only in the late 1990s and the 2000s that she again became known in India, largely because of her work in Hindi films. She was born in 1912, so she was 76 when she worked with us, making, in a sense, her second debut in India. She was cast as Moteram’s wife, the Panditayin. Subhash Tyagi, who played Moteram, was exactly 30 years younger than her. She had to dye her hair to match his age, but honestly, she could just as well have done without. She was a livewire. She matched Tyagi, who was pretty energetic himself, step for step. Her agility and lightfootedness was to be seen to be believed, no doubt a result of the training she had received for eight years from the legendary Uday Shankar. I also marvelled at her vocal skills. She could hit any note she wanted, perfectly, every single time, and she could project clearly, down to the last syllable of a long line, right to the back of the auditorium.

When I asked her about it, she told me, nonchalantly, that she did vocal riyaaz every day.

‘You mean you don't?’ Her eyes widened in disbelief and I wished the earth would swallow me. 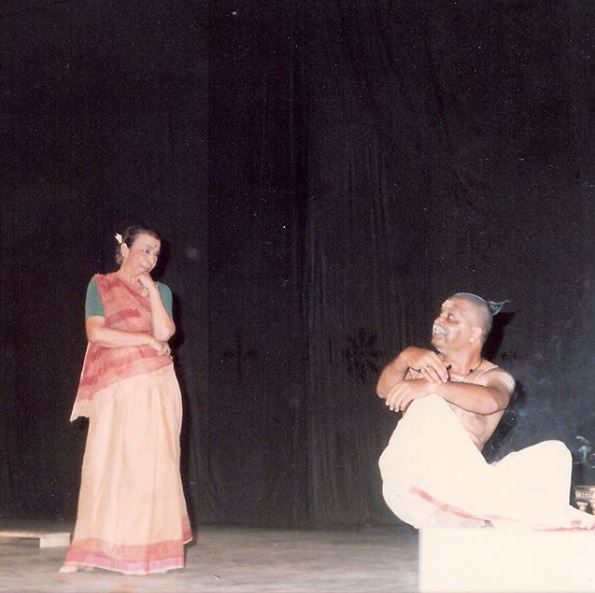 Notes for my Safdar Hashmi book. Safdar and NK were picked up by the police during a performance on February 8, 1986, from Madras Hotel. They were both hoping the police would press charges – that would’ve given them a chance to campaign against the authoritarianism of the State. But a number of artistes got together almost immediately and issued a statement. Signatories included Bhisham Sahni, M.K. Raina, Dadi Pudumjee, Manjeet Bawa. Pressure mounted on the police, and eventually, the two were let off without charges. Poor guys, Delhi Police disappointed them! 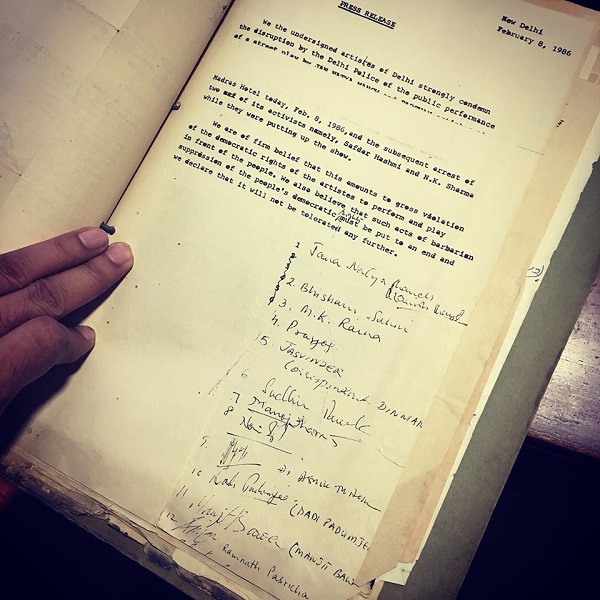 With the legend, Shombhu Mitra, in Bhopal, at the opening of Bharat Bhavan in 1983. Front, L-R: Rudraprasad Sengupta, Safdar Hashmi, N.K. Sharma. Middle, L-R: M.K. Raina, Shombhu Mitra and unidentified person. Back row: the playwright Nag Bodas. Part of my research for the book on Safdar, to be released on January 1, 2020. 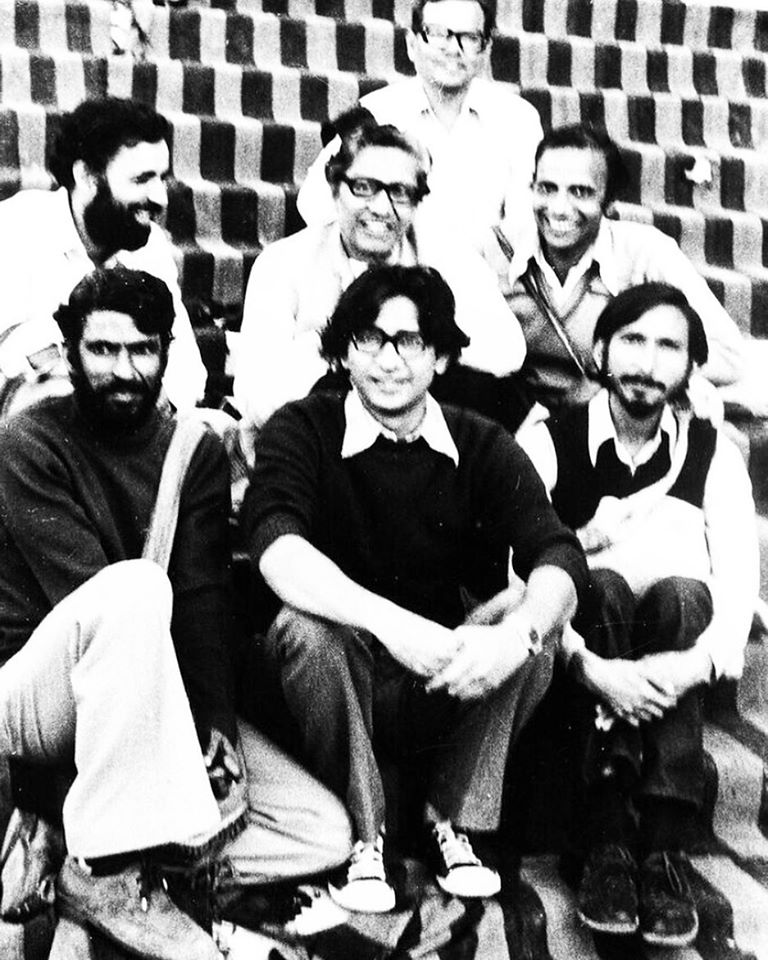 I keep unearthing gems as I research my forthcoming book on Safdar Hashmi. Safdar had adapted Maxim Gorki’s play Enemies in the mid-1980s. At that time we only did street theatre so the play was never produced. In April 1989, after Safdar was killed, Habib Tanvir directed the play for the NSD Repertory and wrote some magnificent songs for it. Here are two of them, both my personal favourites, both my anthems in difficult times. 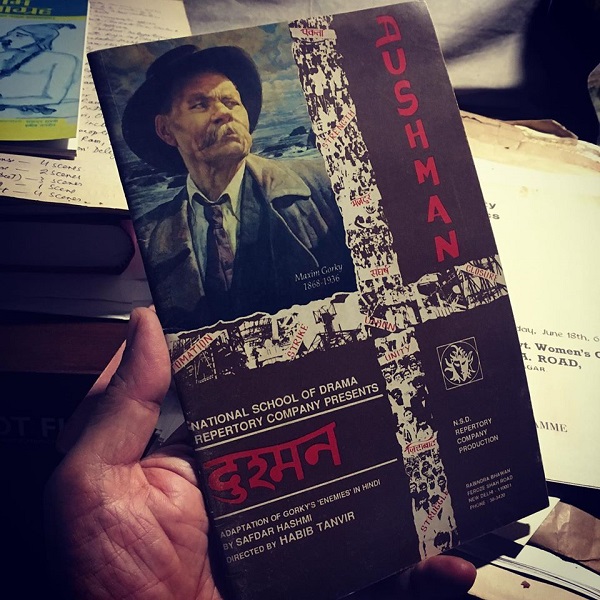 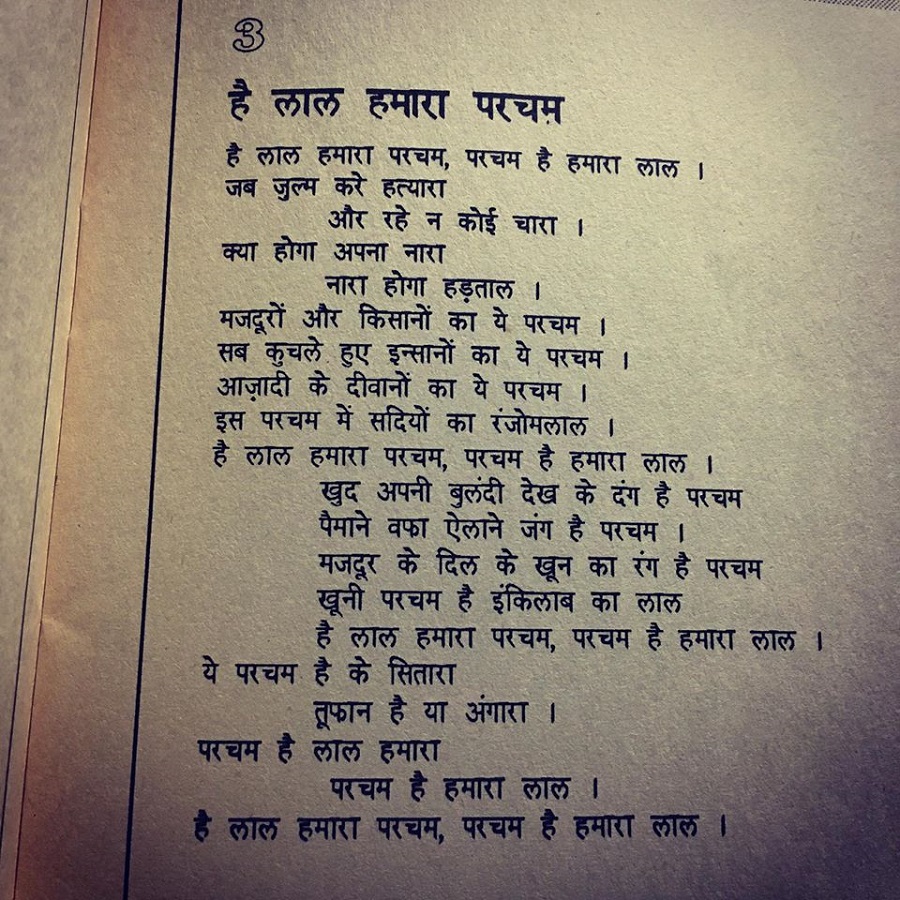 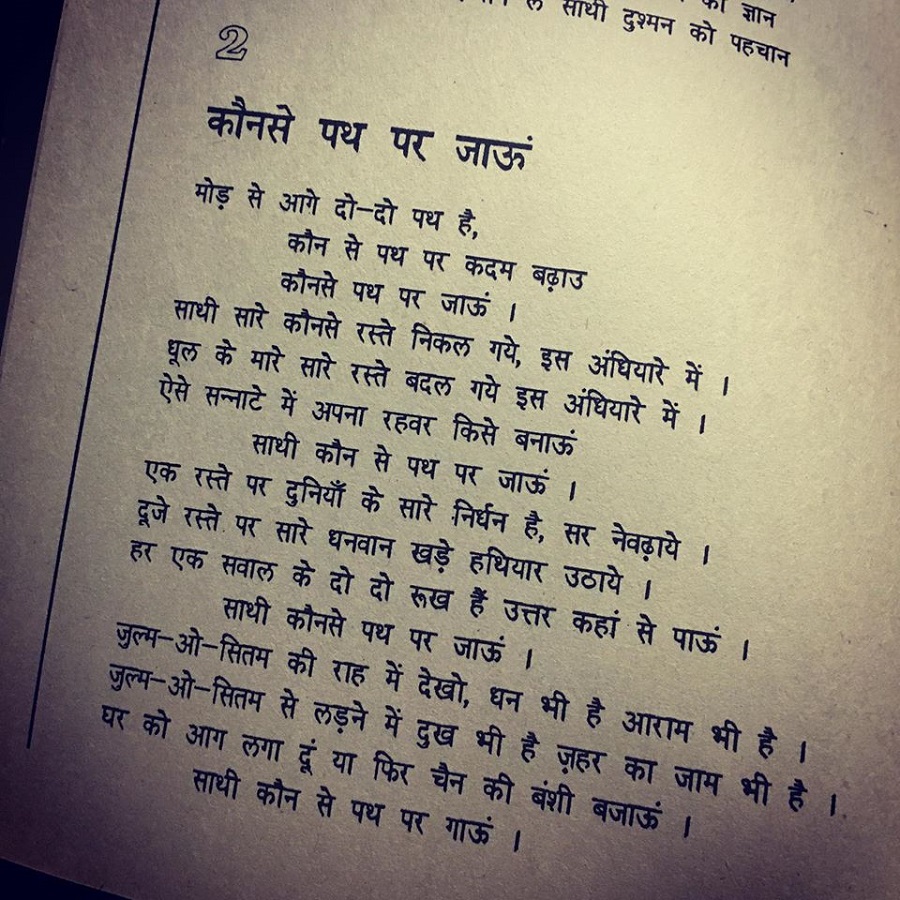 More research for my book on Safdar Hashmi. In the mid-1980s, Safdar turned to writing for television and video in a big way. One of his writing projects was a serial on adult education, entitled Khilti Kaliyan, directed by Gurbir Garewal, which aired on Doordarshan. Here is the link to the first episode. Seema Biswas plays one of the lead characters. The first episode begins with her encountering a young mother on a bus, played by Anusha Khan. You can also see Sonya Surabhi Gupta as the singing toy seller a little later. I recall that Sanjay Maharishi played the conductor of the bus carrying Seema Biswas and Anusha, but clearly that role has been edited out. This episode marks my screen debut as well, which was nothing short of utter and unmitigated disaster. At 20.45, you can see a very dark scene, where a young farmer is threatened and beaten up by the landlord and his henchman. You will see that the entire scene is in long shot. The reason? Well, the young farmer is me, and I stammered and stammered and stammered so much that it was impossible for them to shoot anything that showed me speaking. I held up the shoot for over two hours, late into the night, as Safdar tried everything he could think of to put me at ease and to get the scene as they had planned it. In the end, everything failed. They turned my back to the light, shot the action, and recorded my lines separately. I was to play a character that was to grow in the serial. After this disastrous start, the character was cut, but Safdar would never admit it was because of my stammering.

‘The story changed,’ is all he would say to me. He was a kind-hearted man.

Without a doubt, the most popular creation of Safdar Hashmi is the song ‘Padhna Likhna Seekho’, written for the National Literacy Mission. Paulo Freire’s spirit is present in these lines: ‘Padhna likhna seekho, o mehnat karne walon / Padhna likhna seekho, o bhookh se marne walon’. The song itself is inspired by Bertolt Brecht’s song from his play The Mother, ‘Praise of Learning’. That the politics of Safdar’s song ruffled feathers was evident when objections were raised, apparently by some Doordarshan viewers, but certainly by some officials of the adult education directorate, that the words ‘bhookh se marne walon’ ran contrary to the government’s claim of having eradicated starvation. I think there was an alternative version of the song being broadcast as well, in which the offending line was simply replaced by repeating the first line. In any case, it is amusing that the far more revolutionary ideas in the later part of the song went uncensored, where Safdar speaks of capitalist and gender exploitation and urges the oppressed to make socialist revolution. Astonishingly, I haven’t found a link to the original Doordarshan version on the internet. Does anyone have it?

And a bit of crowdsourcing

(Not seeking help any more, thanks!) [Later update to post]

Seeking help from Urdu readers. Here are a few pages of a manuscript. Can anyone tell me what they might be? It seems to me that this is Habib Tanvir’s writing, but I could be wrong. This is for my book on Safdar Hashmi. 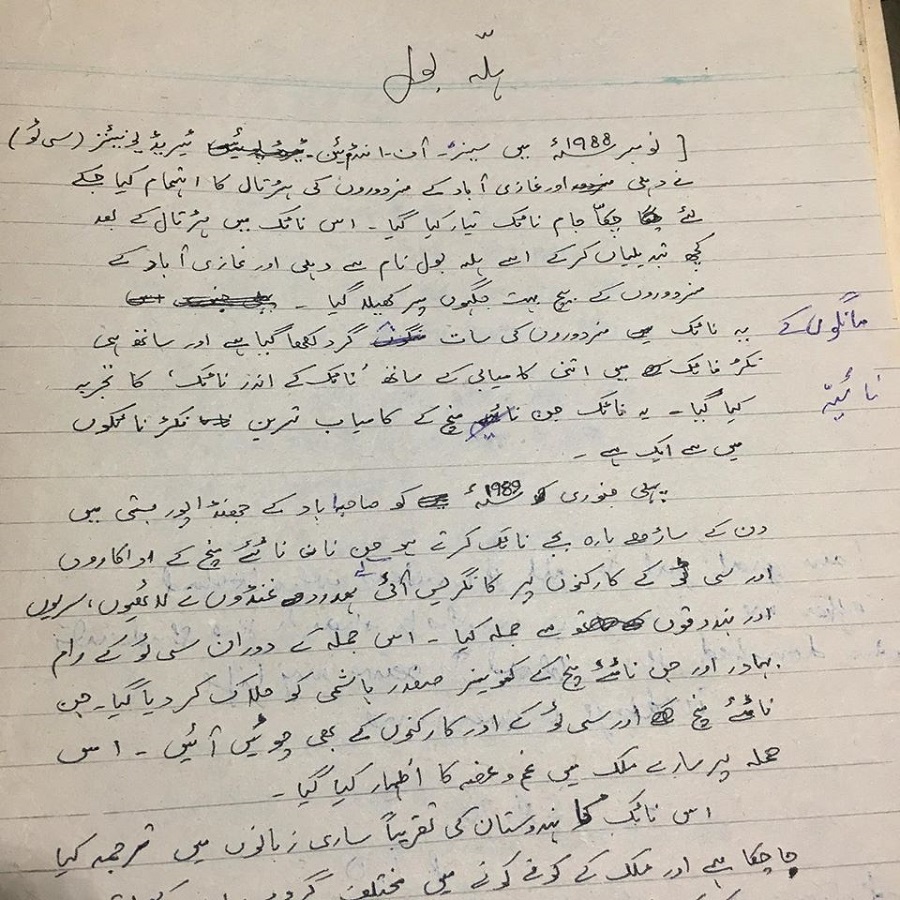 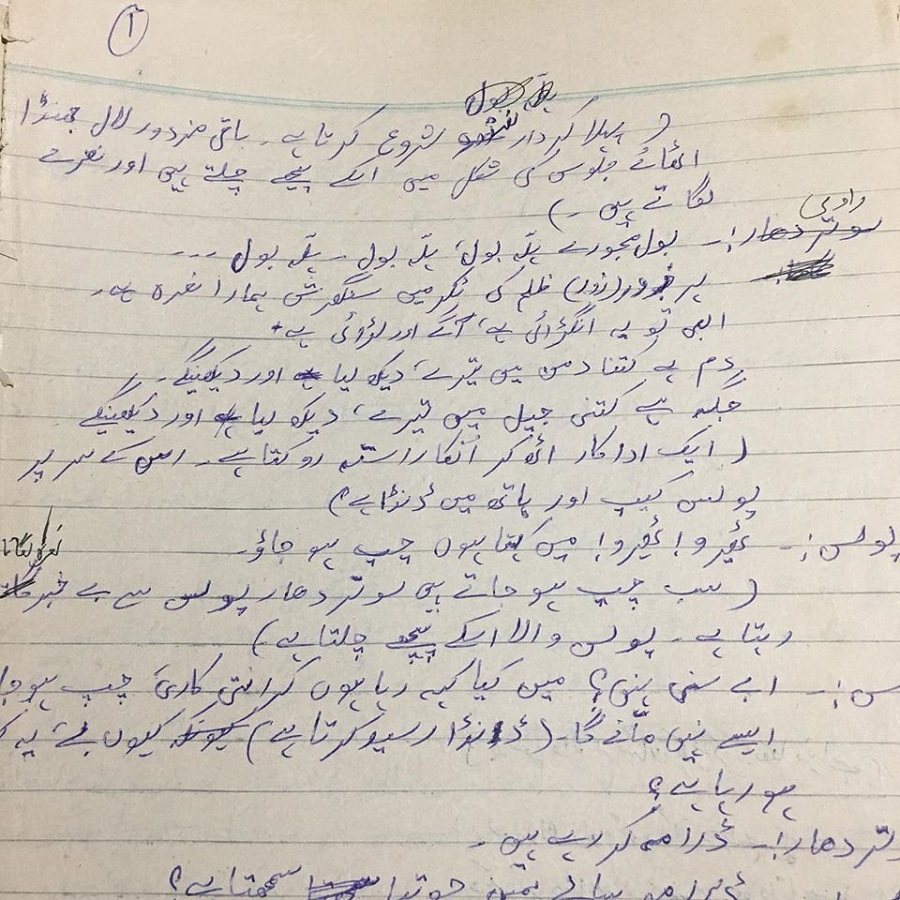 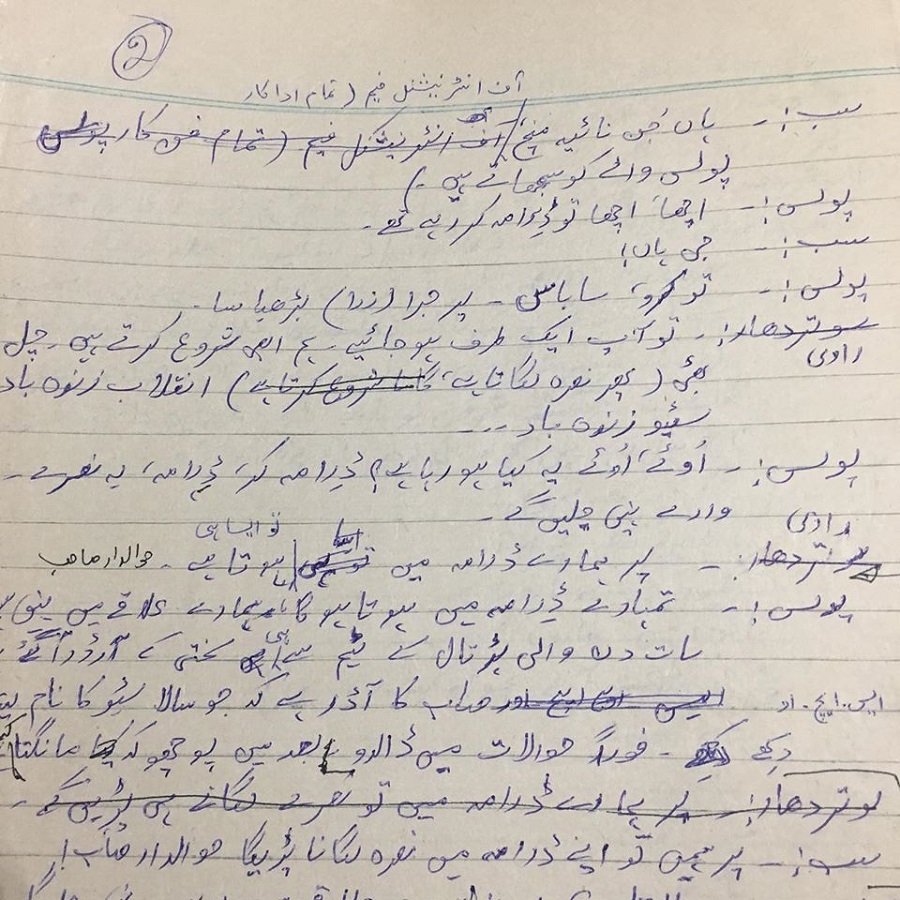 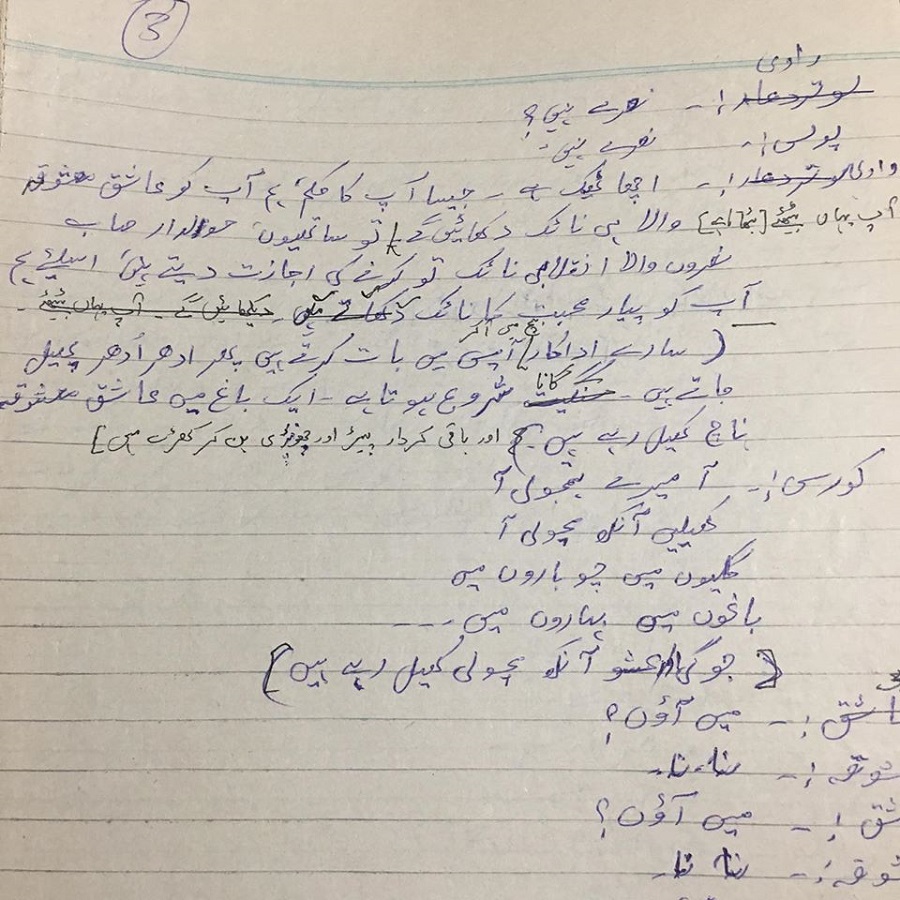