The Journey of ‘Halla Bol: The Death and Life of Safdar Hashmi’, Part 1 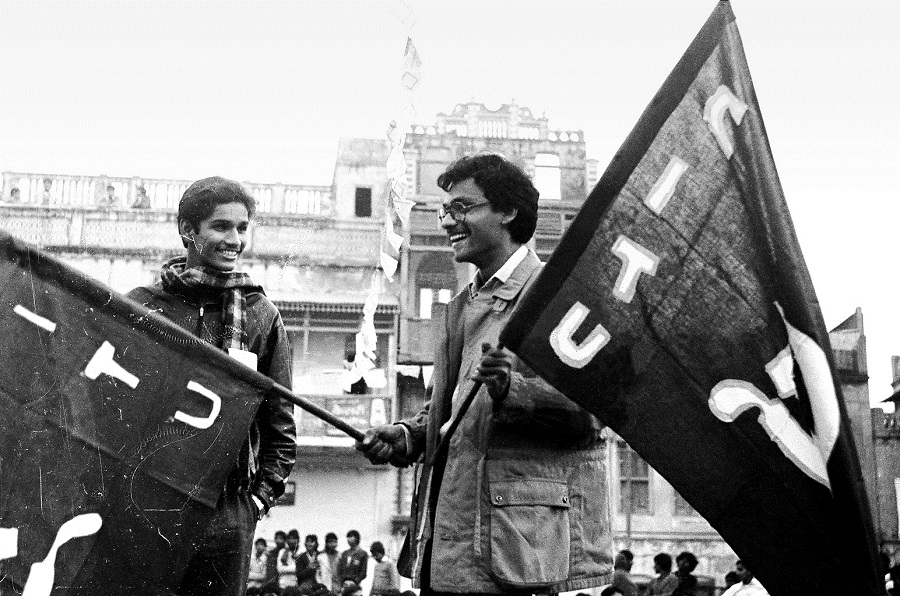 It was towards the end of July that the author, serial hashtagger and indulgent ‘Boss’, Sudhanva Deshpande, began sharing updates on the book’s progress on Facebook. Occupied with all kinds of tasks at LeftWord, Vaam Prakashan, and Studio Safdar – over and above the writing of the book – he could hardly be expected to sit down and talk to us about it. These updates were all we had as we grew more and more impatient.

Read on. There’s a lot here that didn’t make it into the final text. (Click on the sub-heads to see the individual Facebook posts.)

I’m writing a book on Safdar Hashmi, Jana Natya Manch, street theatre, political activism, and the attack that resulted in Safdar’s and Ram Bahadur’s death. I’m going through Safdar’s papers. And every time it gets a little heavy, Safdar amuses me with his little doodles. 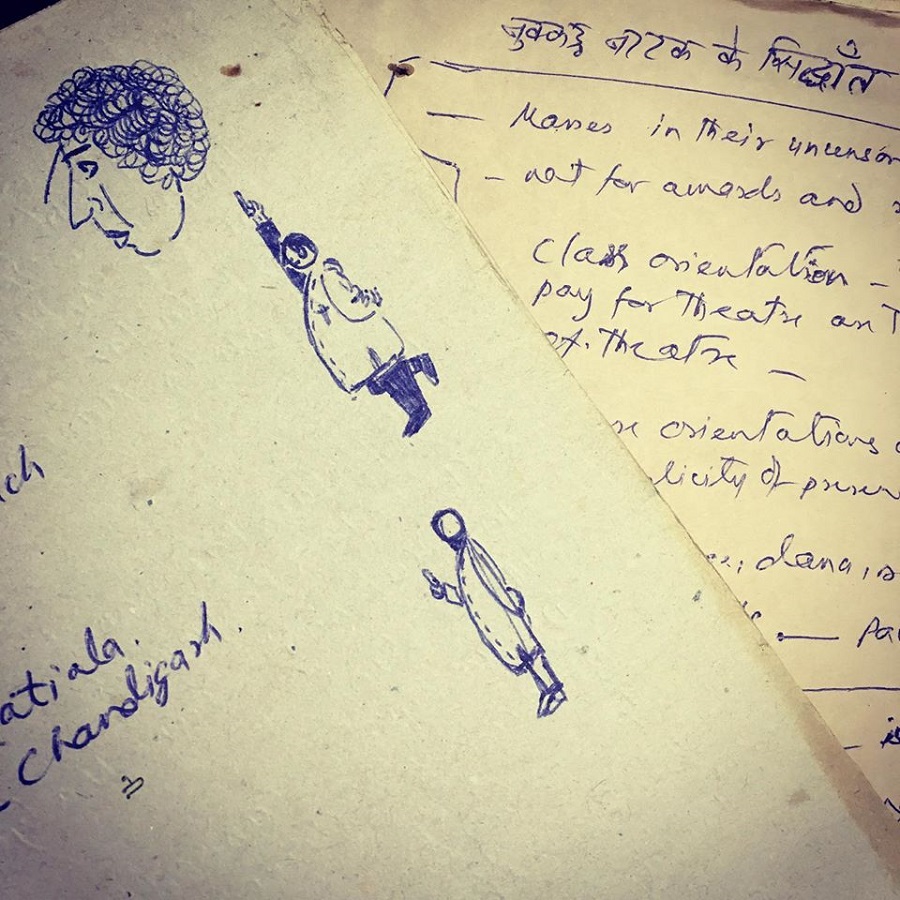 … and later that day 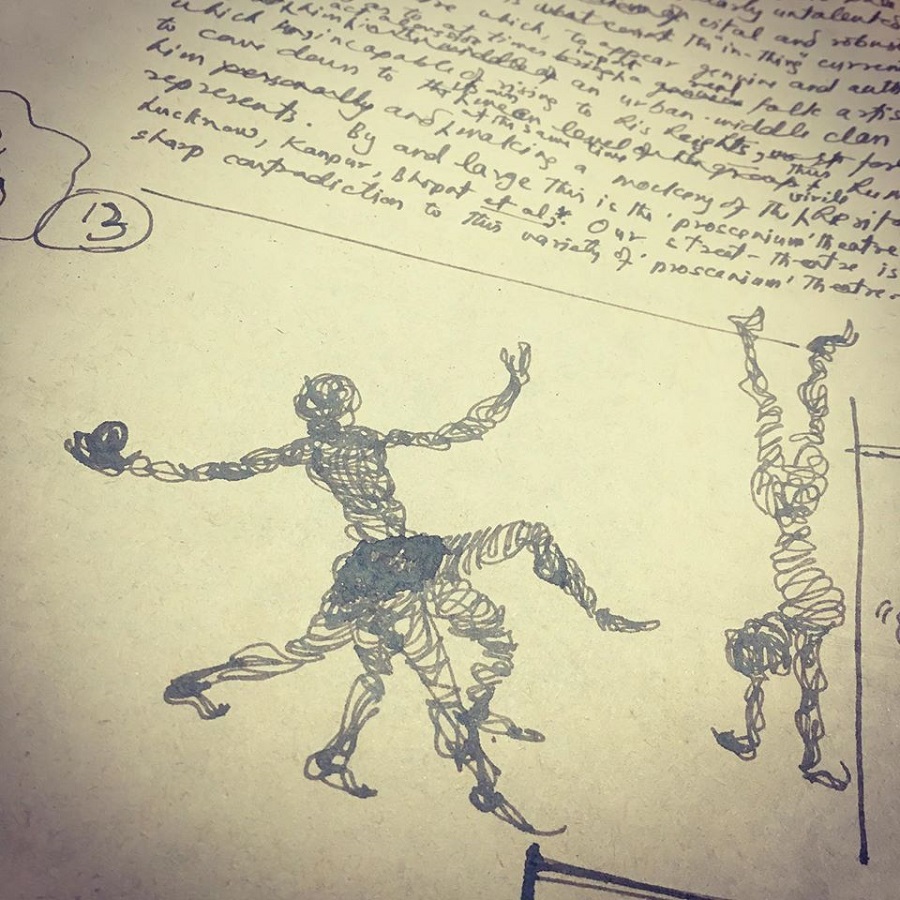 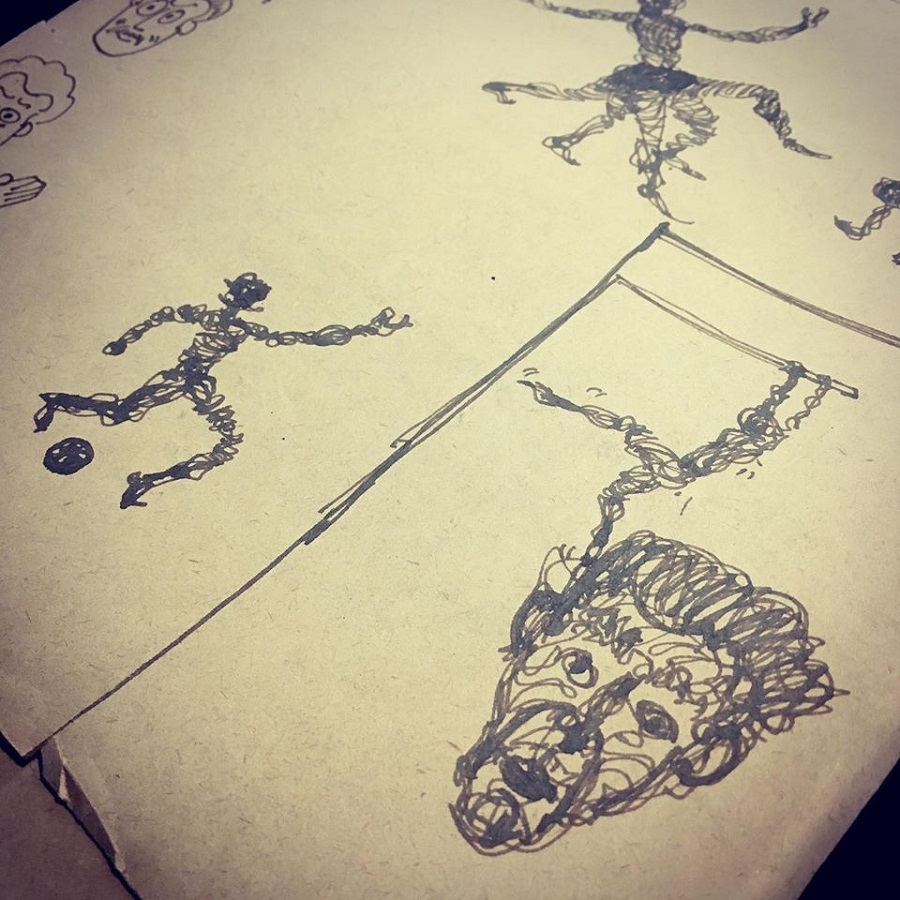 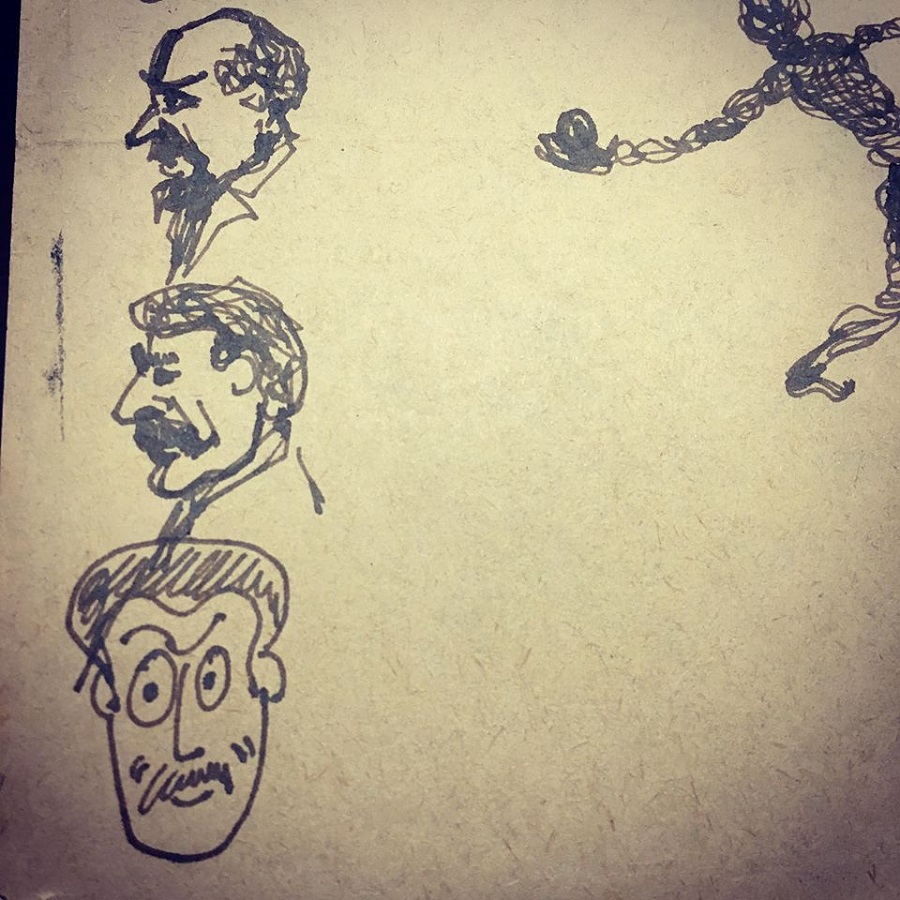 A play that never came to be. Safdar Hashmi’s notes on a play on Centre-State relations. His partisanship towards Left Front governments is clear. As I’m researching for the book I’m writing on Safdar, the one clear line that runs through his entire life is this – unwavering political partisanship. And the doodles. Everywhere. 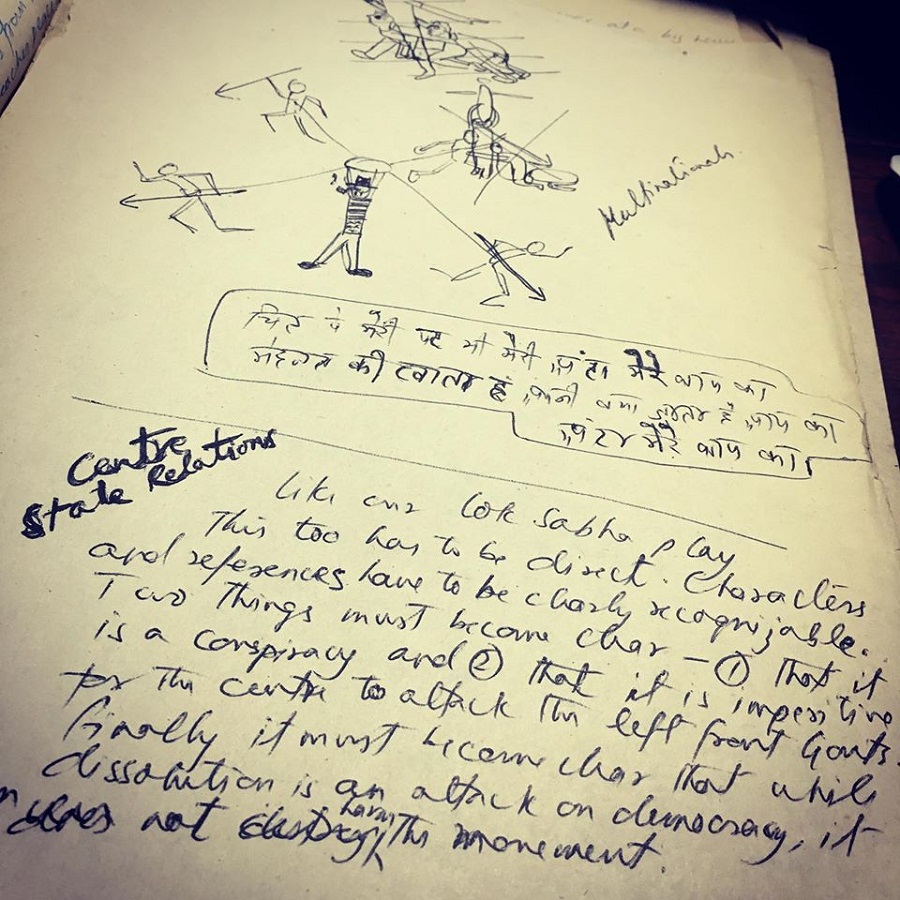 As part of my research for my forthcoming book on Safdar Hashmi I’m looking through his papers. This is a little note he made while reading Malini Bhattacharya’s essay in the 2nd issue of the Journal of Arts and Ideas. The note is made while travelling on the Rajdhani Express which in those days had a chair car. I always used to think of that chair car as a special torture device invented by a bored railway babu. I can picture him, scribbling furiously, battling the rattling train as much as ideas. Safdar’s note is a sniper’s shot at the fascination with ‘roots’ by leading Western practitioners, among whom he names Peter brook and Richard Schechner specifically. For all his personal amiability, Safdar was unsparing in ideological battles. 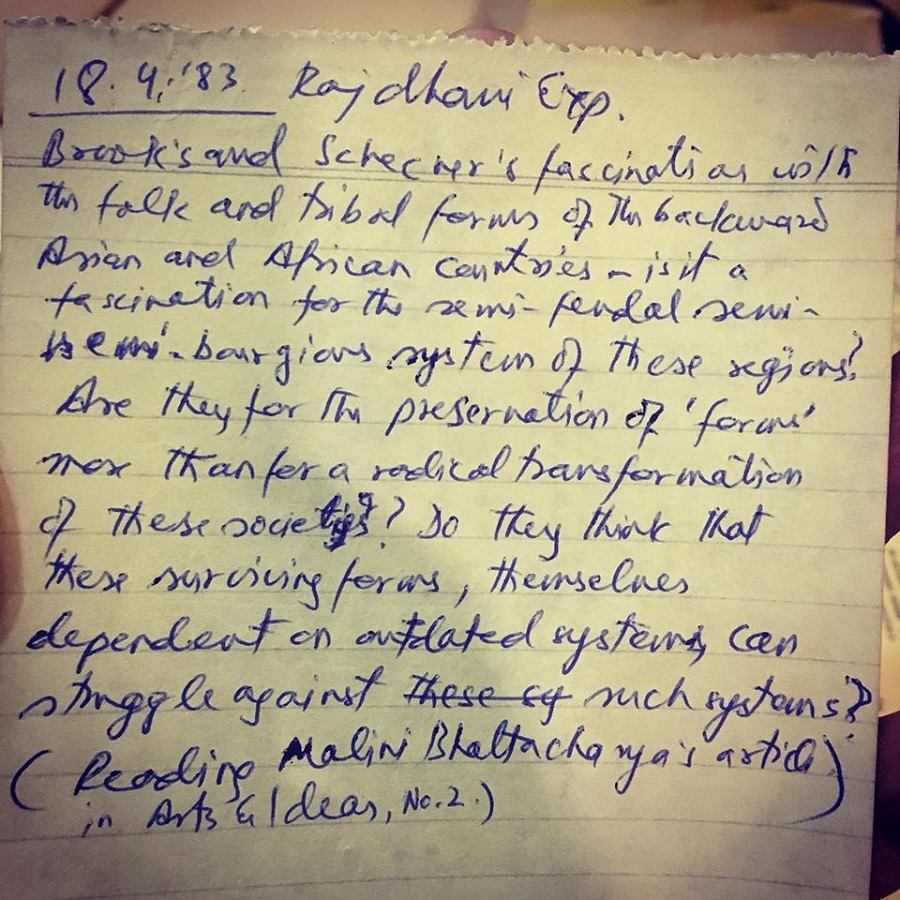 [On their way to Sardarshahar, Rajasthan, December 1988.] 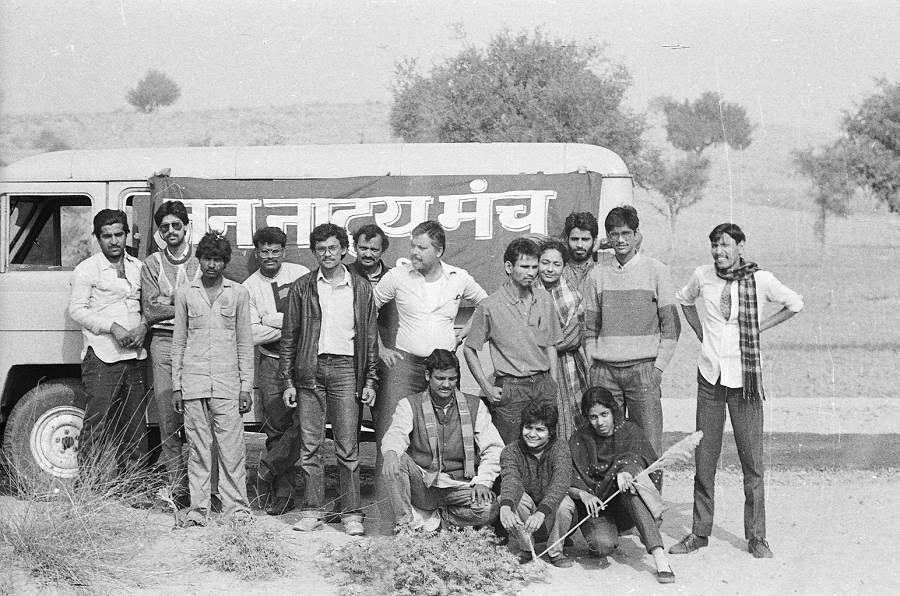 [Screenshot from Sudhanva's wall. He had recently set this photo as his display picture.]

Photo: Safdar Hashmi. This is in Sardarshahar, Rajasthan, December 1988. This is the same jacket I was wearing on January 1, 1989, on the day of the attack. 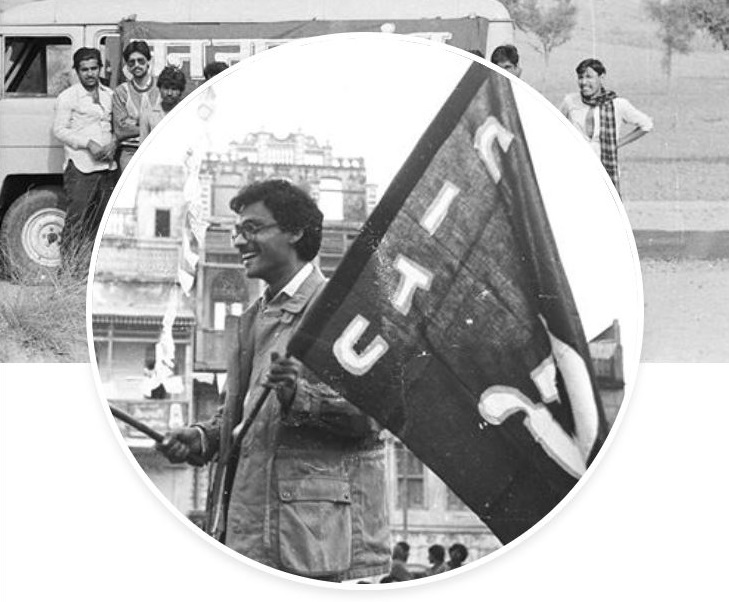 My book on Safdar Hashmi basically ends with the performance we did after his murder on January 4, 1989. Going into the formation of Sahmat is a whole new subject, outside my scope. But I still thought it might be nice to post these two photos of January 10. This is the first written mention of the Safdar Hashmi Memorial Committee I’ve found, which was the precursor to Sahmat. The press release is signed by Mala, M.K. Raina, Sohail Hashmi, Manish Manocha, and Jogendra Sharma. The second photo lists members of the Committee, including many who’ve worked selflessly for three decades to keep Sahmat going. Ram Rahman, Madan Gopal Singh, Vivan Sundaram, and Raina himself are still at the core of Sahmat’s work. Then there are names like Bhisham Sahni, Utpal Dutt, Habib Tanvir, and G.P. Deshpande, all founder-trustees of Sahmat, no more with us. There’s also Shabana Azmi, whose stunning protest from the stage of the film festival captured the anger of the moment. Without doubt, Sahmat has been the most vital and imaginative anti-communal platform of artists and intellectuals over the last three decades. 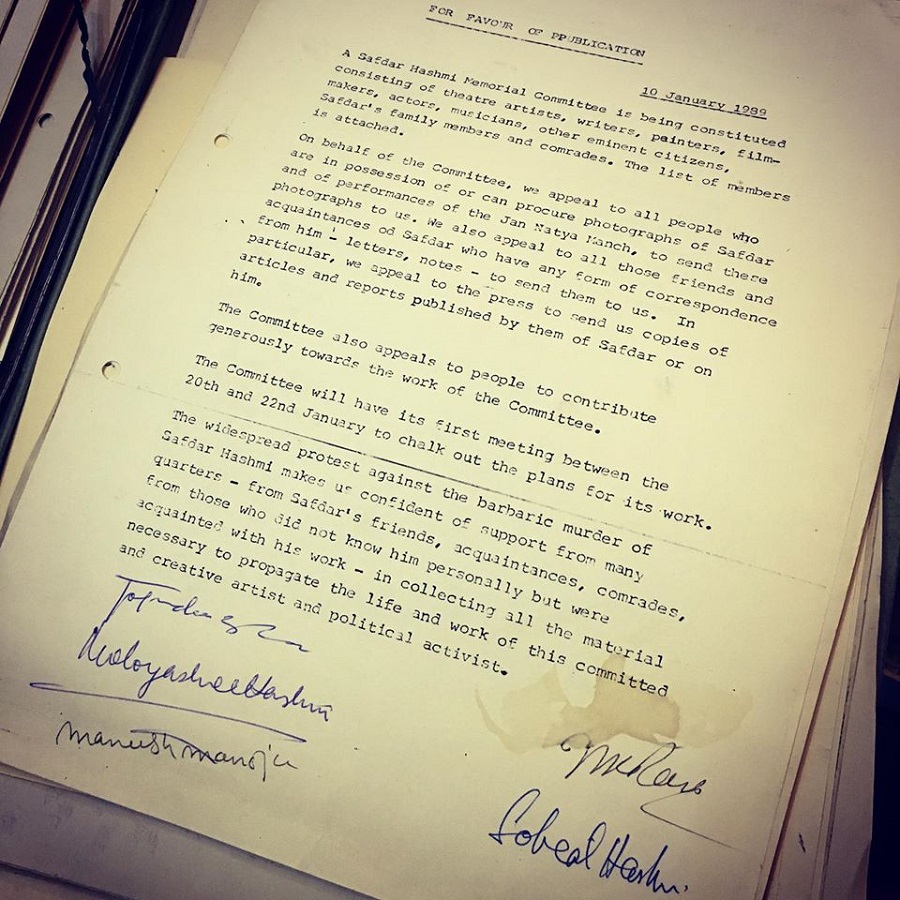 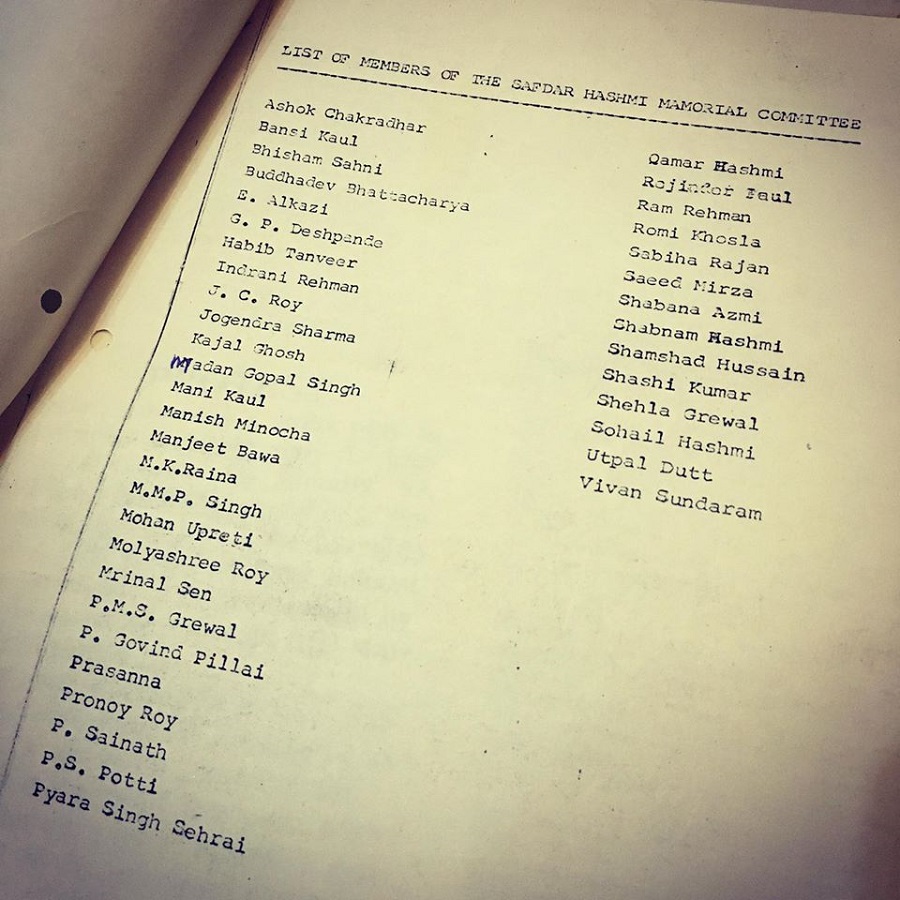 Looking through photos for my forthcoming book on Safdar Hashmi, I came upon this photo of Mala and myself. A bit of background will help make sense of what’s happening here. Jana Natya Manch was attacked on January 1, 1989, in which the worker Ram Bahadur was killed, and Safdar was fatally injured. Safdar died in hospital on the 2nd. He was cremated on the 3rd. On the 4th, we went back to Jhandapur and completed the interrupted show. On the 5th, there was a massive protest march through the central part of Delhi, beginning on Sansad Marg, and going through Connaught Place. I was a Red Volunteer during the march, which means I was one of the people wearing a red shirt, and carrying a red flag at half-mast, angled across my chest. Someone – I think it was Vivan Sundaram, but I need to confirm this – came up with the idea of creating hundreds of placards with Safdar’s smiling face on them, which people wore around their necks or held in their hands. There were no other banners or signs. Just hundreds of smiling Safdars. This is a photo someone took of Mala before the march began. In the background, you can see the placards. 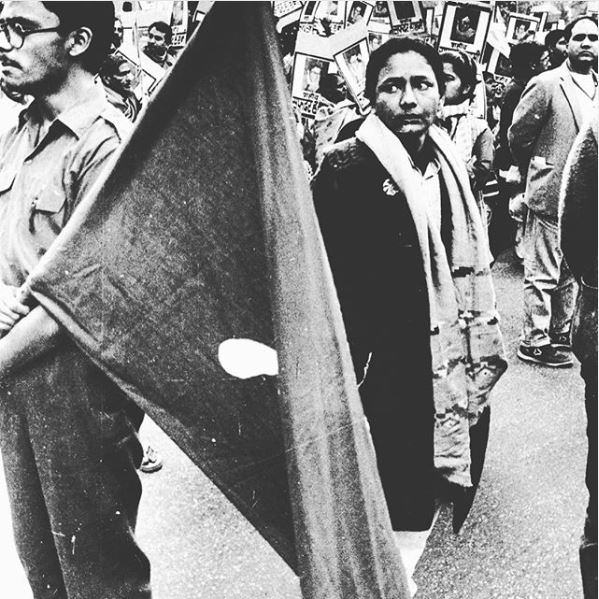