The Wretchedness of Caste – Ambedkar, Fanon, and the Blocked Indian Revolution, part three by Vijay Prashad 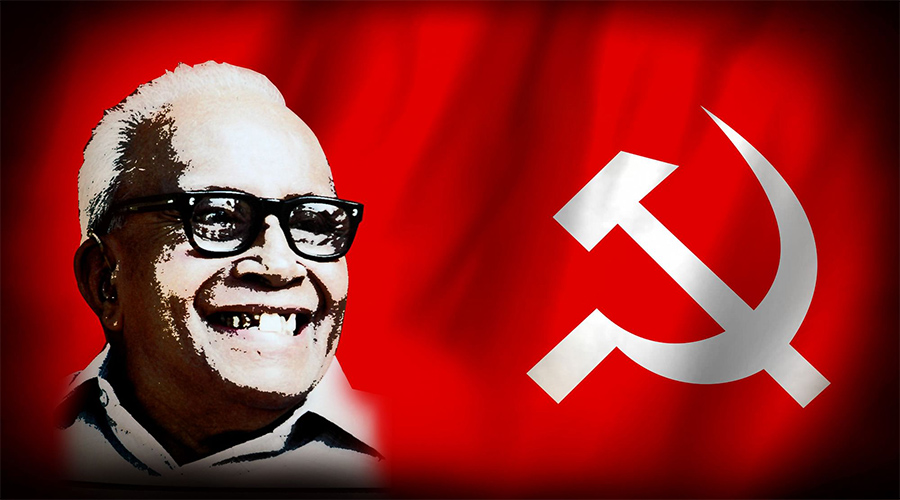 This is part three of a three-part blog post. Read also part one and part two.

Cognisant of the special oppression of caste and of religious majoritarianism in Indian society, EMS Namboodiripad (1909-1998), one of India’s most important communist theoreticians, fought against the organising of people based on these very lines; one cannot fight caste oppression on caste lines. Instead, caste oppression had to be fought by organising people into unified class organisations that understood and emphasised the special role of caste in Indian society. As he put it in his essay on caste and class,

We had then and still have to fight a two-front battle. Ranged against us on the one hand are those who denounce us for our alleged ‘departure from the principles of nationalism and socialism’, since we are championing ‘sectarian’ causes like those of the oppressed castes and religious minorities. On the other hand, are those who, in the name of defending the oppressed caste masses, in fact, isolate them from the mainstream of the united struggle of the working people irrespective of caste, communities and so on.

But the tonic of unity was not meant to dissolve questions of social indignity experienced by oppressed castes, by women, by adivasis, by those who experienced the violence of class hierarchy alongside the violence of other hierarchies. These questions had to be at the table. The Communist movement in India wrestled with the precise balance between the need for unity of all exploited people and for a special emphasis to be placed on certain kinds of oppressions along hierarchical lines of social division.

It was clear to the communists from the 1920s that the working-class in India is not made up of unmarked bodies of workers. It is made up of people with experiences of social hierarchies and indignity who required particular emphasis to fight those hierarchies. It is impossible to think of the complexity of rebellions in India without engaging with caste movements and gender movements and so on. Caste, Gender, and so on are ways in which class manifests itself in the world. Class is not an essence. Class is an analytic understanding of power. People do not have a class like they have a religious, caste, or gender identity. Class is understood analytically. It is the embodiment of various forms of suffering and consciousness together. Marx has a very nice distinction between class-for-itself and class-in-itself. What is important is not only your position in a class society, but it is your understanding of that as well – and this understanding is typically refracted through religion, caste, gender, and so forth.

Rather than survey the entire history of the communist struggle against social hierarchy – which today gathers force through mass organisations such as the All-India Women’s Democratic Association, the Adivasi Adhikar Rashtriya Manch, and the Tamil Nadu Untouchability Eradication Front – the reminder of this essay will look at one example from Tamil Nadu.

In the 1930s, in East Thanjavur – in today’s Tamil Nadu – peasants and agricultural workers began small agitations against the landlords. In 1938, the communists – themselves a young group – called some of the leaders of these agitations to Nagapattinam for a conference. They discussed the issues before the peasants and the agricultural workers. In 1943, the Tamil Nadu state committee of the Communist Party sent B. Srinivasa Rao – known as BSR – to the district to continue the struggle. BSR began to create a Kisan Sabha unit in the district. As part of this task, he had to create a courier system. One day, he sent a young man to deliver a message. The young man came back many hours later, to BSR’s chagrin. Why did he take so long? The man said because he was a Dalit, he had to go around the main roads and thereby not incur the wrath of the Hindu landlords. BSR and the communists understood that the caste question could not be ignored in their struggles. After all, the peasants and agricultural workers were largely Dalits and oppressed castes, with many of them pannayals or bonded labourers. The communists – including Manali Kandasami - led a struggle for the right to the roads. It was from this struggle that the major agrarian rebellion took place in 1943 till 1952 – from before to after British rule. The details are important. In 1944, the Communists led a struggle against the landlord of Kunniyur in Mannargudi taluk. The pannaiyals joined the agricultural union of the CPI. The landlords pushed the British to prevent any assembly of pannaiyals; the colonial State agreed. It did not prevent the panniyals, the agricultural workers union or the CPI from stopping their very brave struggle. The excitement of independence in 1947 did not stop them from an intense agitation – even as the CPI was banned - across the district in 1948, which won them higher wages and permanent employment. This fight resulted in the Thanjavur Pannaiyal Protection Act of 1952.

Just across the way, in West Thanjavur, however, the same sort of class and caste dynamic led to a caste war that lasted for a decade. The Thevars organised along caste lines to attack the Pallars, a Dalit community, which culminated in the terrible caste war of 1957. This caste war lingers on.

The wretchedness of caste asserted itself in Thanjavur in 1968. Under the flag of the Kisan Sabha, the agricultural workers and peasants fought to increase wages. The landlords were prepared to raise the wages, but they wanted the red flag brought down. That was their demand: no more organisation, no more communist organisation. On 25 December 1968, the militia of Gopalakrishnan Naidu – head of the Paddy Growers Association – came into Venmani and said to the villages – as G. Veeraiyan recalled – ‘to take down the red flag’. ‘We won’t’, they said, ‘because it is the red flag that liberated us’. The armed gang pushed 44 Dalit men, women, and children into a hut and set it on fire. A woman tried to throw her infant son out, but he was thrown back into the fires. Not one of the gangsters – these ‘gentlemen killers of Kilvenmani’, as Mythili Sivaraman put it in 1973 – has been convicted for this murder. Naidu, acquitted by the courts, was murdered in 1980. The CPI(M) erected a memorial in the village to the forty-four from one-year-old Dhamodaran to seventy-year-old Suppan.

The residue of the East Thanjavur struggle also remains, but this time in a much more productive fashion. It can be seen in the Tamil Nadu Untouchability Eradication Front, a project of the Communist Party of India (Marxist). This front goes into villages, organises people there, and gives them confidence. Organising provides a platform for confidence. People might have consciousness, they might have the willingness to act, but sometimes they do not have the confidence to act. Confidence plays an immense role in the development of struggles. It can be of course self-generated – but it does not hurt to have political forces, such as parties or fronts, come in and provide the scaffolding for one’s confidence. The Tamil Nadu Untouchability Eradication Front has been going from village to village, organising people against such abominations as caste walls. These are horrible walls built in the middle of various villages in Tamil Nadu. It is like an apartheid wall. By engaging in these sorts of anti-caste struggles and connecting them to issues of class, other mass organizations of the CPI(M), such as the Kisan Sabha, have also gained members. There are more farmers’ and agricultural workers’ units now. Here we see what Hegel in The Phenomenology of the Spirit (1807) called ‘the seriousness, the suffering, the patience, and the labour of the negative’.

During the struggle in the 1940s, BSR went to Kalappal village (where he was greeted by Kalappal Kuppuswamy, poisoned in Trichy central prison in 1948). BSR’s message to the gathering is worth attending to:

You all were in your mother’s womb for ten months and your mother’s gave birth. Your landlord and their agents were also like that. You are also a human being like your landlords. Like them you also have two legs and two hands. What is the difference between you and them? If you are hit, hit them back. If not only illegal to whip the pannayals and forcefully pour cow dung liquid into their mouth; it is inhuman too. If they try to impose punishments like that, you should chase them and attack them. If the goons come to attack you, tie them to a tree. If any one of you is attacked, the entire village should rise against the attack and defend you. Your unity and the strengthening of the Kisan Sabha are more important. Hoist the Red Flags in all the villages!

If you are hit, hit them back. This is BSR’s message from the 1940s, but it is also Ambedkar’s message, and it is also Fanon’s message. Self-respect is the left-arm of any struggle for liberation. If every part of the human is not liberated by our struggle, then why would people under wretched conditions sacrifice their lives for emancipation; only if every aspect of the hideousness of our times is part of our movement will the movement draw in the largest number of people to fight to make our dreams a reality.