The Poems of Resistance by S. Chandramohan 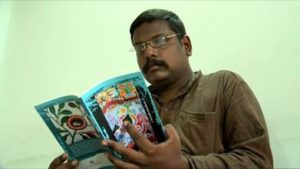 Chandramohan S is an Indian English Dalit poet. He is part of P.K. Rosi foundation, a cultural collective (named after the legendary,pioneering Dalit actress) that seeks to demarginalise Dalit-Bahujans. His latest collection of poems Letters to Namdeo Dhasal is forthcoming.

RAPE AND MURDER OF A DALIT GIRL

No newspaper carried a headline or a photo feature,
No youth were roused to protests,
No city’s life came to a standstill,
No furor in the parliament,
No nation’s conscience was haunted,
No Prime Minister addressed the nation,
No TV channel discussions,
No police officials were transferred or suspended,
No candlelight marches,
No billion women rising,
A Dalit girl was raped and murdered!

S. Chandramohan’s poetry reflects the brilliance of his thought process and the rebel inside him. The sheer diversity and variety of issues that he has taken up show his concern for human values that transcends the boundaries of the nation-state, caste, class, gender, and religion. In a true sense, only a humanist could do so.

I had the privilege of close association with legendary Mulk Raj Anand,whose first novel Untouchable with an introduction from E. M. Forster created ripples internationally and exposed the hidden caste hatred, including the issue of manual scavenging prevalent in our society. I was fortunate to have met many laureates of Indian writings who took up the issue of the marginalized, but very few coming from the communities of the marginalized.

During the Mandal war in 1990, we saw English language media used as a tool to spread hatred against the Dalits and marginalized. Dalits were mocked and there were absolutely negligible numbers of writers who could counter the brahmanically corrupted intellectual elite, which looked secular in its mask yet uncomfortable to the core question of social justice. During the Mandal period, we also saw Dalit-OBC students writing their own blogs. They countered the ‘merit’ propaganda unleashed by the ‘devotees’ of corporate culture in India who never ever saw ‘wrong’ in the corrupt practices by these in educational institutions in the name of ‘donation’.

In the following ten years since Mandal, we saw counter-narratives taking more important shapes. Alternative media grew, with web portals such as countercurrents.org providing space for the forces that struggled against all forms of exploitation including Brahmanical cultural subjugation capitalist onslaught on socialism and state’s accountability. Magazines such as Forward Press energized debates on Bahujan literature and enlightened us with a stunning Bahujan cultural discourse. As the numbers of these young writers who challenged the Brahmanical discourse grew, the contempt and assault upon them also became visible. The Rohit Vemulas in our universities today, however, have refused to play the part of Eklavya. The growing consciousness of Ambedkarism and the legacy of Dalit Bahujan consciousness have had its impact.

(Inspiration from an anti-lynching poem)

Blood on books and blood on papers,

A Dalit narrative cannot be just an urbanized ‘educated’ construct, but also the story of a Dom in Varanasi’s ghats or Mushahars fighting for their battle or Nats, Kalandars, Kushwahas,Rajbhars, Kols, Tharus, Balmikis (and they too have diversity among themselves), Kanjars, Sansis, Banzaras, and so many others who are not known in popular discourse and are out of bound from the writers’ circle.

I write poems in a language not sung at my cradle

What songs will be sung at my grave?

for a sterile and synthetic history.

Chandramohan is a well-defined modern poet who wants to stand with all forms of discrimination and has got a language, which many will definitely envy.Moreover, Chandramohan’s brilliance in poetry has surpassed anyone that I have come across so far in terms of variety of issues that he takes up. He has not just spoken against caste violence and untouchability but subject likes gay rights, Soni Sori, Irom Sharmila, Muzaffarnagar, and so on.Capitalism and religious fanaticism or theocracy work together and compliment each other. In India capitalism has come handy for Brahmanism to push its agenda to suck our resources and subjugate the DalitBahujan-aadivasis. Chandramohan makes this fodder for his poetry. Themes of the subjugation by capitalism and its new policy phrase – neoliberalism – make their way into this poetry. Some of his finest poetry comes from his close scrutiny of Globalisation. These touch the inner chord of one’s heart.

Every drill driven into the earth

holes into her womb

a miscarriage of neo-liberal development’

Chandramohan has rightly termed Dalit literature as the literature of resistance. In a recent interview, Chandramohan says, As the African proverb goes, ‘Until the lions have their own historians,the story of the hunt will glorify the hunter’. Dalit literature is the documentation of the resistance of Dalit Bahujans against the Brahmanical social order. It is one of the world’s oldest resistance movements. Dalit literature aims to complement the larger civil rights struggle of DalitBahujans the world over and I believe we are on the cusp of a big change.Our voices are beginning to be heard.

When a lover couple

hid in the hood of a tree

they chanced upon love letters

some of them half burned

some of them centuries old

along with a picture of Shoorpanaka

sans her nose, ears, and breasts!

Chandramohan reflects the coming of the Ambedkarite age of articulate young Indians who will not only challenge Brahmanical literature and its falsified constructs but will go far ahead of them in terms of quality and sincerity of the issue.One of my dear Ambedkarite friends the late N.G.Uke had a favorite quote about the quality of an Ambedkarite, ‘ We have to be better than ‘their’[brahmanical’s] best’. I think this age has finally arrived with the remarkable verse of Chandramohan which will not just questions the wrong done to Dalits or to anyone else but also participates in all the international movement for human rights, human values, social justice and equality. The modern Dalit Bahujan literature need not just be reactive but provide alternatives of a better world and respond to the crisis of our time. Chandramohan’s verse does that impressively.

(A poem on migrant labourers in Kerala)

(The displaced of capital have come to the capital- Anne Winters.)

To be greeted with a lisping embrace

At God's own country.