The Left Loses an Election in Tripura, but it Has Not Been Defeated 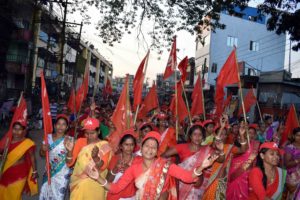 The BJP and its ally – the Indigenous People’s Front of Tripura (IPFT) – have won the 2018 elections to the Tripura state legislature. The alliance of the BJP and the IPFT will now form a government.

It is the first time in twenty-five years that Tripura, a state of four million people in India’s northeast, will be without a government of the Left. The outgoing chief minister – Manik Sarkar of the Communist Party of India (Marxist) [CPI-M] – has been in that office since March 1998. Before Manik Sarkar, the chief minister was CPI-M leader Dasarath Deb, whose Left government ruled the state from April 1993.

Since the first elections in Tripura in 1963, the Left has played a crucial role in the state. It was the principle opposition to the Congress Party’s governments and to president’s rule. The Left ruled the state in coalition and then for a decade from 1978 to 1988 under the leadership of CPI-M leader Nripen Chakraborty.

During this long period of active work in Tripura, the Left played the role of the architect of the state’s tremendous achievements. When the Northeast was wracked by State violence and secessionist insurgency, the Left government in Tripura put its focus on education and health care, on human security over military security. Great investment of popular energy and social wealth went towards increasingly the literacy rate and decreasing vulnerabilities from ill health and old age. Recently, Tripura – this small state – moved into the top position on India’s literacy chart. The literacy rate in Tripura is now 94.65% - one of the singular achievements of the people of Tripura and of its Left government. V. K. Ramachandran and Madhura Swaminathan, who have closely studied the social progress in the state, make an important point about the literacy rate in their article last year in The Hindu,

In terms of health care, Ramachandran and Swaminathan point out, the infant mortality rate ‘almost halved between 2005-06 and 2014-15 declining from 51 per thousand live births to 27 per thousand’. There are more numbers to look at – the sex ratio, the child mortality rate, and so on. In each of these, over the course of the past sixty years, Tripura has done better than any other comparable state and indeed better than most states in India. There is no question that the Left government and Left struggle has had a role in driving some of the state’s surplus towards improving the social lives of Tripura’s people.

There is little doubt that the Left in Tripura governed with sincerity. It is one of the states with almost no corruption. The Chief Minister Manik Sarkar is famously known as the poorest head of government in India. The Left’s Members of the Legislative Assembly (MLAs) had little wealth amongst them. These are people who care about their state and care to put forward a left agenda for the people. Corruption scandals are unknown and no scandal of any kind wracked the government.

So, why did the Left lose? It is important to point out that the Election Commission’s data shows that the Left won 43% of the total vote – almost identical to the vote secured by the BJP. This means that a sizable section of the voting public continues to vest its hopes and aspirations in the Left. It would be irresponsible to ignore this basic fact. No previous election in Tripura has been this close. In 2013, the Left won 48% of the vote, while its closest competitor – the Indian National Congress – won 36.5% and in 2008, the Left won 48% of the vote, while the Congress won 36% of the vote. This time, the two main parties won almost equivalent percentages of the vote.

It is also important to bear in mind that this is less the BJP’s victory than the complete decimation of the Congress Party. The BJP has operated here like a corporate megalith with its mergers and acquisitions strategy. It essentially used its immense money power to draw in large numbers of low level and senior level Congress leaders – many of them going through the Trojan Horse of the Trinamul Congress. An illustrative example is Sudip Roy Barman, the son of a former Congress leader and Chief Minister of Tripura Samir Ranjan Barman. Sudip Roy Barman was the Congress Party’s leader in the Tripura Legislative Assembly. He was a major figure in the party. In 2016, Barman joined the Trinamul Congress – hoping that its success in West Bengal would translate into Tripura. It did not. So Barman, in 2017 and in anticipation of this Assembly election, went with others into the BJP. So, the first important point to bear in mind is that the BJP was able to acquire Tripura’s ready-made political opposition and arm it with the full arsenal of the BJP’s financial and organisational resources.

Then, the BJP merged its campaign with that of the Indigenous People’s Tribal Front of Tripura, a secessionist group that demands the creation of Tripraland. Armed extremist groups such as the National Liberation Front of Tripura and the Tripura National Volunteers have backed the IPFT. In orientation, these armed groups – and the IPFT – are in favour of ethnic cleansing. The Tripura National Volunteers, which merged into the IPFT, stood for the expulsion of those of Bengali nationality from the state. The Congress had earlier allied with the IPFT, which gave this narrowly ethnicist party respectability. It did so to try and eject the Left. That failed. Now the BJP has used the IPFT to allow it to make inroads into the various tribal communities of Tripura.

A combination of this merger and acquisition strategy, immense amounts of money for the election and an anti-incumbency strategy (Chalo Paltai) allowed the BJP and its IPFT ally to prevail. They are now in power.

A taste of what is to come can be seen in the 23-Dhanpur assembly seat, where Chief Minister Manik Sarkar is in the contest. The BJP hastily called for the counting to be stopped when it appeared that Sarkar was in the lead. According to a letter that the CPI-M sent to the Chief Election Commissioner, ‘we have got reports that with the help of the [police], counting agents of the CPI-M are being driven out from the counting centre leaving Manik Sarkar alone, who is being gheraoed and heckled by the BJP agents’. This is a taste of the thuggishness that is to come.

But the Left, with the support of almost half the population, is prepared to be a radical and sincere opposition force. It will fight to defend the social gains of the people and win the trust back of those who have voted for the BJP. There is no doubt that disenchantment with the BJP will come fast and furiously. The Left must be prepared to win those people back.

This was the first time the Left went head to head with the BJP. The loss is a blow, but it does not define the contest. The Left is the most trusted force to combat the fascistic RSS (from where the next Tripura chief minister Biplab Deb comes) and to combat the communalist BJP. It remains in power in Kerala and has asserted itself with dignity and courage on the streets besides the farmers of Rajasthan and the ASHA workers of Haryana.

Vijay Prashad is the Chief Editor of LeftWord Books. His most recent book is the collection of essays called Strongmen: Trump, Modi, Erdogan, Duterte, with essays by Eve Ensler, Danish Husain, Burhan Sönmez and Ninotchka Rosca. He is also the Director of Tricontinental: Institute for Social Research.