The Birth of the Communist Manifesto 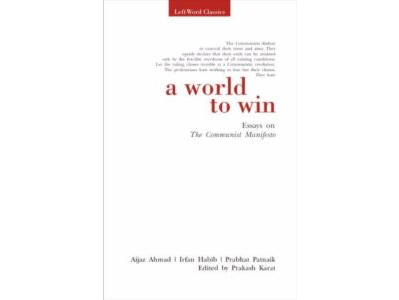 In 1848, Karl Marx and Fredrich Engels published a short pamphlet on behalf of the Communist League. Marx and Engels, both young men at that time, were tasked by the League to produce a document that would define their current situation and propose a communist path forward. This is what they did. Their text - The Communist Manifesto - arrived at a propitious time.

Not long after the publication of the Manifesto on February 21, 1848, workers and peasants as well as sections of the middle class rose up in rebellion across Europe. The first line of the Manifesto - there is a spectre haunting Europe - seemed now to be true. The Manifesto anticipated the revolt. It defined it quite precisely.

The revolt was put down. Its gains - such as they were - went to the bourgeoisie who benefitted as feudal systems were challenged by the popular uprising. The workers and the peasants could not control their future at this time. They were disarmed. They had no organization capable of steering history in their direction. The Manifesto called for such an organization - in this case the Communist League. But the Communists were weak. They were a small club, detached from the workers and the peasants. They had declared their aims, but absent organization there was no way to reach the workers and peasants about these aims.

The Communist Manifesto was barely read. It would have been mothballed if not for the rise of the workers’ and socialist movement inside Europe in the 1870s. This movement of workers, led by the socialists, took the ideas of Marx as their foundation. It was in this context that the Manifesto went into multiple translations and began to be used as guide for the workers’ movement. It would eventually be translated into hundreds of languages and be read by tens of millions if not hundreds of millions of people who sought it out as a major text to understand our world and to understand how to transform it. The book would eventually be the second most printed book after the Bible.

There is something eternal about the language in the text. It is a great literary accomplishment, driven by Marx’s readings of fantasy literature and poetry. Capital becomes a sorcerer, Goethe finds an echo, there are hobgoblins and ghouls. The book is written like a detonator, the sentences explosive, the ideas prophetic. The book - only 23 pages - is not a pamphlet of doom, although there are passages of great feeling about the catastrophes of capitalism. It is a pamphlet written of hope and action, of revolution by the vast majority of human society, the workers and the peasants, whom Marx gave the name ‘proletariat’. This is a text that deserves to read and re-read, to be elaborated and debated. It is prophetic in so many parts, but also inspirational in its tone.

The first book that we published as LeftWord Books was the Manifesto. It was an appropriate selection. The volume 'A world to win:Essays on the Communist Manifesto' had essays by leading Indian Marxists such as Aijaz Ahmad, Irfan Habib, Prabhat Patnaik and Prakash Karat. It also had a superb essay that catalogued the history of its translation into Indian languages. The book remains in print, in paperback. We hope you will get it and read it. It is one of our most special books.