The Arab Spring in Yemen 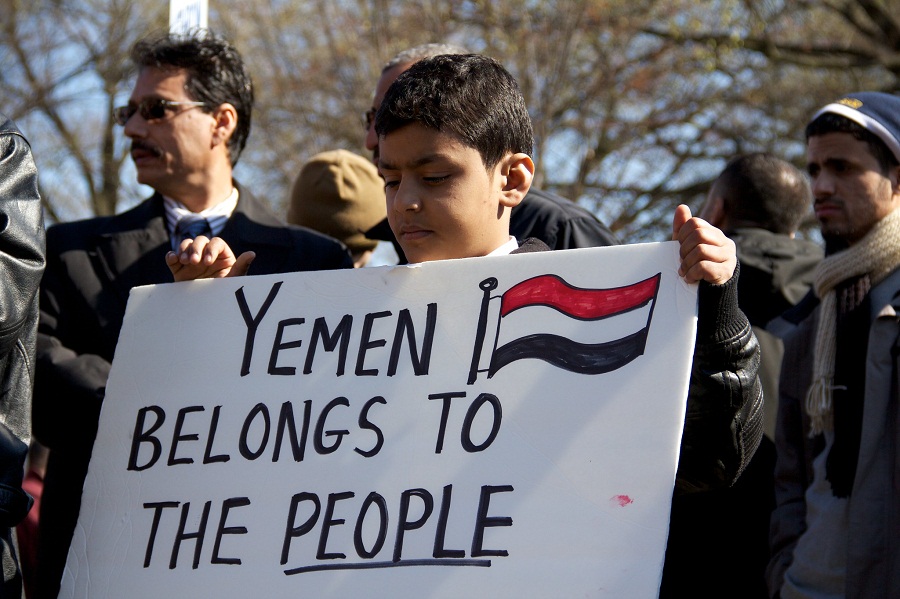 This day in the year 1990, North and South Yemen combined to form the Republic of Yemen. It is commemorated by its citizens as Unity Day. Yesterday, on May 21, the Saudi King Salman sent a cable of congratulations for Unity Day to Yemeni President Hadi, considered one of “Saleh’s Orphans”—Saleh being the de facto autarch that the Arab Spring helped oust. The cable, wishing the President good health and the people security and stability, is a complete travesty considering that the Saudi regime has a lot to do with the current chaos engulfing Yemen, to say nothing of the humanitarian crisis. Writing in 2012 (in Arab Spring, Libyan Winter), Vijay Prashad shows how the US, the Saudis and the former president of Yemen led a war against the masses of this small Arab nation. The only hope is the people, who refuse to give up the fight for a truly democratic republic.

“We have a problem called Yemen.”
—Saudi Prince Mohammed bin Nayef,
Assistant Minister of the Interior to US Ambassador
Richard Holbrooke, May 16, 2009.

Events in Yemen escalated faster than anyone could have assumed. In January, street protests opened up the Yemeni struggle in the capital, Sana’a. Quickly, protests moved to the south of the country, long an incubator for rebellion, with the cities of Aden and Ta’izz in ferment. The economic crisis provided the early slogans, but these morphed quickly into the reason for unemployment and distress—the political autocracy that smothered the ability of the people to identify their own policies for their country. Within weeks, the demand mimicked that in Tunisia and Egypt, with the very large crowds now calling for the ouster of President Saleh. Opposition leader Tawakel Karman, head of the Women Journalists Without Chains, called for “days of rage.” Karman and her fellows have held a weekly protest, every Tuesday, since 2007. They are part of a movement that wishes to change the political dispensation in Yemen, where Saleh has ruled since 1978, one year more than Mubarak. “The combination of dictatorship, corruption, poverty, and unemployment has created this revolution,” she pointed out. She and her group of people had been prepared, and as the popular anger came out onto the streets in 2011, they tried to offer leadership. “It’s like a volcano. Injustice and corruption are exploding while opportunities for a good life are coming to an end.” Karman feared that Saleh’s constitutional amendments had converted Yemen into a virtual monarchy. Under pressure, Saleh said he would not seek re-election in 2013. That was a ploy that Mubarak had used. It was already worthless to an enthusiastic population.

Twenty-thousand people flooded Taghyir (Change) Square in Sana’a on February 3. The Common Front, a political alliance that included the main opposition parties (such as Islamist leaning al-Islah and the Yemeni Socialist Party, which was the former ruling party in South Yemen), threw their lot with the protestors. They called for regime change, and were met with tear gas and live ammunition. Mediation between the opposition and Saleh came to nothing.

The tide began to turn in late February, when most of the major tribal heads threw their lot in with the opposition. Sheikh Hussein bin Abdullah al- Ahmar, the head of the Hashid tribal confederation, resigned from the government “in protest at the repression.” His act was welcomed by the Baqil, whose leadership also made similar remarks. Sheikh al-Ahmar is the brother of Hamid al-Ahmar, a leader of the Islamist al-Islah party, one of the main groups in the Joint Meeting Party (the opposition coalition, where al-Islah commands about forty percent of the seats). The Hashid defection threatened Saleh’s control over the army, as the loyalty of General Ali Muhsin al-Ahmar, in charge of the northwest division, was no longer certain. He would soon defect to the opposition. Muhsin al-Ahmar had a reason to fear and despise his old comrade, Saleh. In 2009, it is rumored that Saleh colluded with the Saudis to kill Muhsin al-Ahmar during his wars against the Zaydi Huthi rebels (Saleh apparently gave the Saudis the coordinates of al-Ahmar, but their air force failed to get him). It is also alleged that Saleh wanted to remove al-Ahmar, the only credible force preventing the transition of power from Saleh to his son, Ahmed Ali. Al-Ahmar’s defection to the opposition was credible.

Saleh recognized the signs. He called for a national reconciliation government. This was denied. Then Saleh refused a proposal for a peaceful transition. Deaths continued, as the security services routinely opened fire on the population (forty-five shot dead in Sana’a on March 18). The tribal armies entered the cities, confronted by the security services and national army. Saleh wanted to blame them for the instability, but Amal al-Basha, head of the Arab Council for Human Rights, would have none of it. “He is the one who committed crimes and violated the law in the first place. He is the one who broke the constitution and dragged the country into violence. He is the one who practised state terrorism.” By end March, the government lost control of a third of the country.

On March 27, US Defense Secretary Robert Gates reiterated the importance of Saleh to the counter- terrorism offensive in Yemen, against al-Qaeda in the Arabian Peninsula (AQAP). “If the government collapses,” Gates told ABC television, “or is replaced by one that is dramatically more weak, then I think we’d face some additional challenges out of Yemen, there’s no question about it.” AQAP has indeed operated out of Yemen, threatening Saudi Arabia as much as the United States. It was the site of the attack on the USS Cole, and it is from somewhere in Yemen that the Yemeni American cleric Anwar al- Awlaki sent his dispatches and his bombers (including Umar Farouk Abdulmutallab, the “underwear” or Christmas bomber). It was also orders from Yemen that sent the “anus” bomber Abdullah al-Asiri to kill Saudi interior minister Prince Mohammed bin Nayef in September 2009.

Gates’ fears also stemmed from actions in Abyan governorate on March 22, when AQAP declared the creation of an Islamic emirate in the province, with strict measures to restrict the movement of women. According to an essay in the Sydney Morning Herald written by Sarah Phillips, a scholar of contemporary Yemen, “The declaration overlooks the complexities of Abyan’s local landscape, particularly the fact that much of its farming economy relies upon the labour of women. If women are really to remain in their homes the local modes of production will have to shift radically. It is one thing to say that Abyan is an Islamic emirate, but another matter entirely to administer it accordingly without attracting local hostility.” Because of this complex landscape, Phillips cautions, neither the Saleh regime nor the AQAP should be taken at their word. “Doing so gives oxygen to sentiments that are abhorred by most Yemenis and constricts the options of those who are committed to genuine change. Real change will be slow, unstable, and non-linear, but it is inevitable.”

Despite what Phillips argues, the entanglements between the Saleh regime, the US counterterrorism operation and the Saudis are going to be very difficult to unravel. Over the last few years, Yemen has become a central front in the War on Terror, and a central location in Droneland. In December 2009, General David Petraeus, head of Central Command, came to visit Saleh and talk about the War and Droneland. Saleh gave the US permission to bomb his territory, even if the strike kills civilians alongside jihadis. “Yemen insisted it must ‘maintain the status quo’ regarding the official denial of US involvement,” Ambassador Stephen Seche wrote in his role as stenographer. “Saleh wanted operations to continue ‘non-stop until we eradicate the disease.’” “We’ll continue saying the bombs are ours, not yours,” Saleh told Petraeus. His Deputy, Rashad al-Alimi said that he had just lied to parliament, telling it that the bombs are American, but fired by Yemenis. Petraeus pointed out that Saleh must tell the Yemeni customs to stop “holding up Embassy cargo at the airport, including shipments destined for the [Yemeni government] itself, such as equipment of [Yemen’s Counter Terrorism Unit].” Meanwhile, Saleh wanted money (he got millions) and equipment (helicopters and IED-jamming devices). Petraeus was less eager about the equipment. Saleh was angry. Americans are “hot blooded and hasty when you need us,” he said presciently, but “cold blooded and British when we need you.” On September 30, a US drone strike assassinated al-Awlaki and his associate the Yemeni American al-Qaeda journalist Samir Khan somewhere between the provinces of Marib and al-Jawf. Both were American nationals.

The United States was wrong-footed over the Yemen protests. It could not afford to alienate Saleh, who still remained in control of the counter-terrorism apparatus. Nor could it go ahead of the Saudis, who remained happy with Saleh (he has a close ally in bin Nayef, the deputy interior minister of the Saudis). Enter the Gulf Cooperation Council, the Arab NATO. In late April, as events seemed at a bloody standstill, the GCC entered with a proposal that Saleh pledge to leave and the opposition stand down. Saleh refused to sign the proposal thrice, and after his May 22 refusal, the GCC walked out. The violence escalated, until Saleh was injured in a 3 June bombing of his compound. Wounded, Saleh fled to Saudi Arabia for medical treatment leaving his deputy Abd al-Rab Mansur al-Hadi in charge, his son Ahmed in charge of the Republican Guard and his brother Khaled in a position of decisive authority over the army. These are the people whom the protestors called the “Orphans of Saleh.”

The military is split into two factions: Ahmed Ali holds the Yemeni government for his father, via his command over the Republican Guard (his cousins Yahya and Ammar hold the Central Security Forces and the National Security Bureau respectively); Ali Muhsin al-Ahmar, Saleh’s main military man is now with the rebellion. The Saudis hedged their bets between Saleh’s return and al-Ahmar’s accession to the presidency.

The protests continued. In mid-September, the First Armored Division under the command of al-Ahmar clashed with the Republican Guard of the Saleh family. Shells fell between Taghyir Square, where the opposition created a tent city, and the Kentucky Roundabout, held by the Republican Guard. The fear was that under cover of the tumult of the Arab Spring, and taking advantage of the massive civilian protests against Saleh, al-Ahmar might conduct a conventional coup.

By early January 2012, Saleh pushed through an amnesty law. Granted immunity from prosecution, and given allowance for his family to maintain control over the forces of repression, Saleh withdrew on behalf of his Vice-President Hadi. Protests broke out once more against the immunity deal that was pushed through the parliament. Amnesty International and Human Rights Watch agreed with the protestors. The draft law, noted Amnesty, is a “smack in the face for justice, made all the more glaring by the fact that protesters have been calling for an end to impunity since mass protests began in early 2011.”

Saudi machinations are rumored. The United States remains silent. There is no call for any human rights investigation or for the withdrawal of the amnesty deal. There is no discussion of substance in the United Nations. Silence descends upon Yemen.

In October, Tawakel Karman won the Nobel Peace Prize. The committee wanted the prize to deliver “an important signal to women all over the world,” removing Karman from her precise context. She would have none of it. This prize, she pointed out, “is a victory for Arabs around the world and a victory for Arab women. … I am so happy, and I give this award to all of the youth and all of the women across the Arab world, in Egypt, in Tunisia. … The fight for democratic Yemen will continue.”