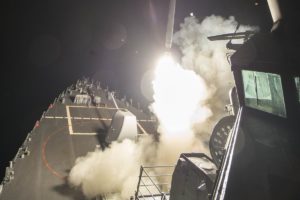 On April 6th, the United States attacked the Syrian regime by launching a number of missile strikes against a military airfield. The US administration, in a statement later, said that the strikes were prompted by the alleged use of chemical weapons by the Assad government against its own population.

After the alleged chemical attack and then the missile strikes which followed, Vijay Prashad, chief editor at Leftword Books, writing in alternet.org, argued that the idea of cracking Syria into pieces would be America's latest Imperial disaster. He writes,

Deeply battered by the civil war, with half its population displaced and over half a million dead, Syria is weakened to the point of virtual collapse. The fall of the government of Bashar al-Assad in Damascus would not be – as many of these intellectuals of the American Empire agree – the best possible outcome. ‘Realistically,’ as Michael O’Hanlon of the Brookings Institute put it in 2015, ‘the replacement of Assad’ does not ‘appear within reach’ given the lack of palatable alternatives. Moderate forces – as far as the US determines – are simply not available. Therefore, the ouster of Assad in a precipitous way is considered foolhardy.

In his book, 'The Death of the Nation and the Future of the Arab Revolution', Prashad has talked in detail about how the West – and Israel – have been content to see Syria bleed and weaken and how a weak Syria was a way to further weaken Iran and post 2003, the west, allied with Israel and Saudi Arab, has pursued it aggressively. The Death of the Nation also maintains that the lessons from Iraq were not learned by the Imperial powers: the same mistakes were repeated in Libya and then again,  in Syria and Yemen.

In a Special Programming on the aftermath of President Trump ordering a military strike on the Al Shayrat airfield in Syria, Philip Maldari spoke to Prashad for KPFA radio. In this radio broadcast, Prashad maintained that the US's role in Syria and in the geopolitics of Middle East is massively influenced by its goal to weaken Iran. Coming back to Prashad's article for alternet.org, he concluded his argument by talking about the extensive role of Israel and Saudi Arab in the Syria crisis and how a weak Syria would be beneficial for Israel and how the US has stopped thinking about the right and ambitions of the Syrian people. He writes,

If Assad falls and a new – perhaps radical Islamist – regime comes to power in Damascus, how would this help Israel? A US intelligence official told me this week that the word of this period is ‘Yugoslavia.’ The break-up of Yugoslavia, he said, left behind minor states with no regional power. Balkanization, he said with a smile, would be the appropriate solution for Syria. Break it up and Iran would lose its foothold and no powerful state would remain on Israel’s border to pose a threat. Israel could permanently claim the Golan Heights, a US-backed state would emerge on the Syrian border, Jordan could help itself to the totality of the Hawran plateau, an Alawite state would take the coastal plain, leaving a series of Sunni states from the al-Ghab valley to the Hamad desert. A weak Syria would be easy to dominate.

Mischief surrounds Syria. Partition is seen as a way to destroy that state and offer Israel relief on its borders with Syria and Lebanon. The rights and ambitions of the Syrian people are irrelevant to these plots and schemes.