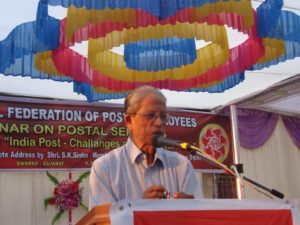 In 1985, when Sukomal Sen was a member of the Rajya Sabha, he stood up to speak about a World Bank loan that had been taken by the Government of India. Sen and his comrades in the communist movement warned – early on – about the insinuation of the World Bank and the International Monetary Fund (IMF) into the policy-making of the Indian government. Take their money, he suggested, and you will find yourself making their decisions. On that particular day in March 1985, Sen made his point with both the clarity with which we knew him and with his command of the facts,

Sen precisely determined – before liberalisation in 1991 – that the neo-liberal policy slate of the World Bank and the IMF would substitute formal employment for casual employment and weaken the working-class organisations in the process. He knew this because he was one of the finest chroniclers of the Indian working-class’s fight against capital from the 19th century to the present. This was demonstrated in his 1977 volume, Working Class of India: History of Emergence and Movement, 1830-1970. The book, published by K. P. Bagchi, was reissued in 1997 with an update till 1995 and then again from Prajasakti Book House in 2003 with an update till 2010. The book could be so easily updated because Sen had identified so clearly the dynamic of the struggle in India between Capital and Labour.

Sen’s vast knowledge of the Indian working-class went from the conditions of the factories to the political struggles of the workers. This is evident in Working Class of India, but also in his impressive history of May Day and the struggle of the eight-hour day – May Day and Eight Hours’ Struggle in India (K. P. Bagchi, 1988). This book opens in Chicago but comes quickly to the Indian factories, where Sen documents the fight by workers to shorten the working-day and to improve the conditions of their work. The last section of the book tells the story of the first observance of May Day in India – on Madras’ beach, led by the communist pioneer Singaravelu.

In 2011, Sen published the definitive history of the World Federation of Trade Unions (the WFTU was founded in 1945). This book – International Working Class Movement (National Book Agency, 2011) – tracks the operations of the WFTU from 1945 to 2011. It is a documentary history of the institutions with a careful eye on the WFTU’s work in the Third World. This year, as part of the celebrations of the October Revolution, Sen published a two-volume book with Aakar called Socialist Revolution in Russia in 1917 to Capitalist Counter-Revolution in 1991.

But most importantly for us – at LeftWord Books – Comrade Sen was a Director of our press, and continued taking a keen interest in our publications even after he was relieved of the responsibility.

We will miss him greatly.