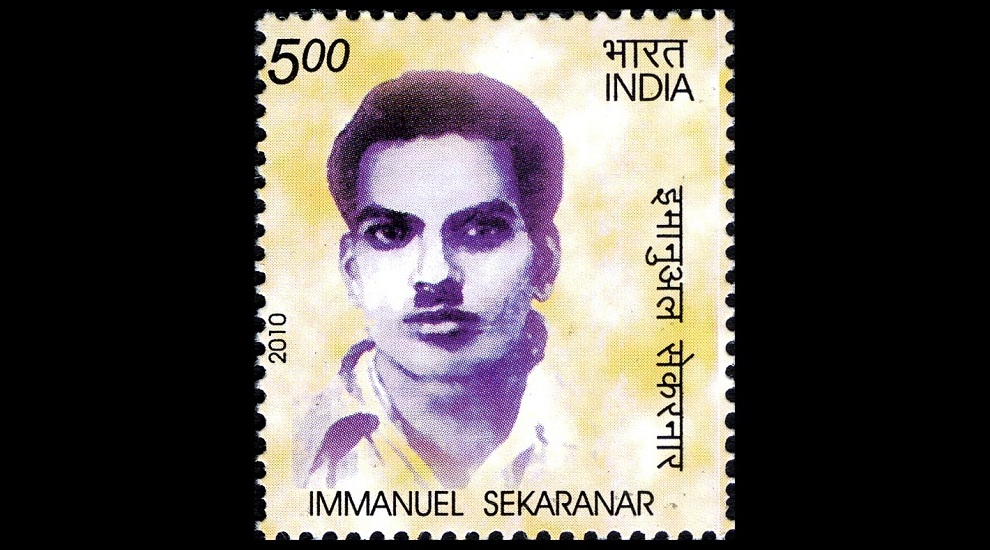 The killing of Immanuel Sekaran in September 1957 became a major flashpoint in Tamil Nadu politics. Memories of the Mudukulathur riots have been moulded to perpetuate and intensify caste conflict in the region ever since. Prof K.A. Manikumar’s Murder in Mudukulathur: Caste and Electoral Politics in Tamil Nadu (2017) helps set the record straight. Below is the preface to his monograph.

Terrible caste violence broke out in 1957 in eastern Ramanathapuram district (Tamil Nadu). The reasons for the outbreak were complex but the immediate trigger was this. Muthuramalinga Thevar resigned from the Tamil Nadu Assembly, and a by-election was held on 1 July. In the bitterly contested election his Forward Bloc party members and Congress party members clashed. The violence spread across the district, causing many murders and the burning of homes. On 10 September 1957, the district collector – C.V.R. Panikkar – convened a peace conference in a bid to enforce peace.

At the conference, Muthuramalinga Thevar objected to the presence of Immanuel Sekaran, the leader of the Pallar community – a Dalit community of Tamil Nadu. Sekaran, Thevar said, did not represent the Pallars. A. Perumal, the Pallar MLA who represented the Mudukulathur reserve constituency was the sole representative of the Pallar community. Thevar rebuked his followers for allowing Immanuel ‘to grow in stature and talk back to him’. The following day, Immanuel was found murdered near the railway station of Paramakudi. A police party led by Inspector Rai went to Keelathooval to arrest the accused, Angusamy Thevar and Peyan Muniyandi Thevar. The police shot five Thevars as they attempted to arrest these two men. This police shooting triggered the violence that followed in Ramanathapuram district.

The Thevar offensive against Pallars spread across the region, resulting in death and destruction. The police did not stay their guns. The press reported five incidents of additional police firing. Muthuramalinga Thevar was soon arrested under the Preventive Detention Act (1950). A few feeble protests followed, but the arrest led to the end of the Thevar offensive in the region. By the second week of October 1957, the violence had abated. Protests of a sporadic kind took place against the police’s behaviour.

Etched in popular memory as the Mudukulathur Riots, the memories of this infamous event remain alive today. It is an event invoked both by Thevars and Pallars. While the Thevars remember it for the state violence, the Pallars recollect it as one more instance of caste violence, but where they resisted the violence bravely. Both communities have subsequently used the memory of Mudukulathur, the epicentre of riots in 1957, to mobilise their communities. The memory of Mudukulathur has also affected the subsequent political process of Tamil Nadu. This is not merely a historical episode. It is alive and well in Tamil Nadu.

The conflict of 1957 evokes longer histories of caste conflict in east Ramanathapuram. Here the main fault line is between the Mukkulathor (those of the three castes – Maravar, Kallar and Agamudaiyar) and the Pallars (a Dalit community). The sharp antagonism is related not only to social discrimination, but is also rooted in the economic realities of property ownership. Until the turn of the twentieth century, the Mukkulathor were a law unto themselves. The government was virtually non-existent in the region. Local officials claimed not to be able to enforce the law, as they said they feared physical assault. When the colonial state invoked the Criminal Tribes Act 1871 against the Mukkulathor, it had no impact. As the dominant caste in east Ramanathapuram, their writ ran through the area. As with other dominant castes, the Mukkulathor subjected the Dalits – especially the Pallars – to several oppressive restrictions that forced many of them to emigrate or convert to Christianity in protest. Migration and conversion later enabled the Pallars to access education and acquire a heightened level of consciousness about their rights.

In the 1930s, there was an unprecedented upsurge among the Dalits in the east Ramanathapuram district in resisting dominant caste oppression. Yet it was not consolidated into an organised movement. By the early 1950s, because of a rise in the number of educated Dalit youth, and the leadership provided first by Perumal Peter and later by Immanuel Sekaran, the Pallars rallied under the banner of the Depressed Class Youth League and identified themselves politically with the ruling Congress party ‘to participate as subjects in the development of their country’. However, as Congress supporters, they found themselves pitted against U. Muthuramalinga Thevar and his political outfit, the All- India Forward Bloc that comprised mainly of Thevars.

‘Thevar’ is an honorific name common for Mukkulathor communities. Maravars inhabited in eastern Ramanathapuram district in large numbers. A government report from 1957 describes the Maravars or Thevars a ‘law unto themselves’.

The same year, the sub-collector of Ramanathapuram said that his officers refused to live in the area. They worried about offending Muthuramalinga Thevar or any other Thevar leader. What would offend them? If they went to collect kist (rent fixed for land), or if they sent others to collect it, they would face problems. A police party, he suggested, should be provided to each deputy Tahsildar and Tahsildar for his protection.

Electoral democracy interrupted the power equation in the district. The Thevars found that they were not able to easily intimidate the Nadars (another Non-Brahmin community) and the Pallars. Muthuramalinga Thevar and his confederates won comfortably in both the Mudukulathur general and Scheduled Caste constituencies of Ramanathapuram in the first two elections (1952 and 1957). But the Congress increased its votes in the district by 1957. Supporters of Thevar responded to this decline in electoral support with violence against Pallars. That the Chief Minister K. Kamaraj of the Congress aligned himself with the Pallars only increased the wedge on communal lines. Electoral democracy and aggravations of livelihood inflamed older social divides, bringing caste firmly into modern disputes.

Conflict in any society is often an outcome of political, social and economic change. Such a conflict in its wake brings about development and advantage to some social groups and maldevelopment and disadvantage to others, leading to tensions, protests and clashes. Stating that conflict cannot be excluded from social life, scholars have distinguished between conflict and violence. If protest takes place through institutionalised channels, such as parliaments, legislatures, and other instruments of power, or as a peaceful mobilisation of people in streets, then it is conflict. In contrast, if protest takes an aggressive form and riots break out in the streets, with or without the complicity of state authorities, then it is violence.[2] This violence, caused by human aggressiveness, is ‘identified with fighting instinct and characterised by the exercise of force, with a view to inflicting injury or damage to person or property’.[3] There is a marked difference between individual violence and collective violence. The former includes homicide and related crimes, while the latter manifests itself in riots and rebellions. Even within collective violence there is a distinction between instrumental violence, which is perpetrated in a deliberate attempt to achieve certain set objectives, and the violence represented by impulsive reactions resulting in riots. Here it is important to note that the word violence or aggression would not apply to the use of force ‘by dependent people in their bid to secure their inalienable rights’.[4]

Sociologists point out that wherever people live under unjust social conditions – with denial of access to educational and social facilities and unequal opportunities in jobs and services, and are therefore deprived of the chance to realise their human potentialities – structural violence is inevitable. The link between inequality and political violence has been confirmed since the days of Aristotle, who wrote, ‘inequality was the universal and chief cause of revolutions … and in politics inferiors revolt in order that they may be equal and equals that they may be superior’.[5]

On 11 September 2012, violence broke out on Immanuel Sekaran’s day of remembrance, leading to police firing, in which six Pallar youths were killed. Acting on misguided instructions from above, John Pandian.[6] was detained by the police. Pandian was on his way from Tirunelveli to Paramakudi. His presence there would not have created an explosive situation. Pandian had been in prison for the previous five years. He had mellowed in the jail. The ill-advised arrest of Pandian, however, provoked his ranks of the Tamilaga Makkal Munnetra Kazhagam (TMMK) who had assembled in large numbers at Paramakudi. When they heard of his arrest, they picketed the five roads on the Madurai- Rameshwaram highway, demanding the immediate release of their detained leader. Traffic stopped in Paramakudi town. People who wanted to visit the memorial to Sekaran could not do so.

As in any mob unrest some miscreants reportedly started pelting stones at the state transport buses and at the vehicles stranded on account of the road-roko organised by the activists of TMMK. According to the police, the TMMK activists threw petrol bombs and torched the police and the private vehicles and this prompted them to resort to lathi charge. As the situation reached a flash point the police officers ordered the policemen to open fire. In the police firing in Paramakudi and later at Chintamani, situated on the outskirts of Madurai, where altercation between the police and the Pallars returning from Paramakudi took place, six Pallars, all landless labourers, lost their lives. Several others sustained terrible injuries. The most gruesome aspect is that the police registered cases against a few hundreds of Pallars under several sections of Indian Penal and Criminal Procedure Codes.

The state government appointed an enquiry commission, after the opposition parties, notably the CPI (M), pressed for a judicial enquiry. K. Sampath, a retired High Court Judge, constituted the one-man commission. The judicial enquiry conducted by Gomathinayagam Commission on the Kodiyankulam incident (1996) and the Justice Mohan Commission on the Tamiraparani tragedy (1999) had justified police action and acquitted the state revenue and police officials of their excesses. It is, therefore, natural that the Pallars did not expect any good outcome from the government-appointed commission, headed by a retired judge. As was anticipated, the Justice K. Sampath Commission also exonerated the police on the Paramakudi Police Firing. What human rights defenders and Dalit activists expect the state to do is to grapple with the problems that are triggering frequent civil disorders in the region and find a lasting solution for them. It is hoped that this monograph will help in understanding both the caste groups in historical context and enable the State to arrive at a lasting solution to the conflict in the region.

[6] Sekaran’s murder in 1957, followed by the betrayal of the successive governments of mainstream political parties, left the Dalits in east Ramanathapuram in a state of despair for about two and a half decades. In the mid 1980s John Pandian, a Pallar by descent and a strong-arm man from Tirunelveli region, known for his audacious militant posture, mobilised the Pallars in Ramanathapuram, Sivagangai, Virudhunagar, Madurai, Dindugul and Theni districts, under the banner of Tamilaga Makkal Munnetra Kazhagam (TMMK). Since then he commands a strong following in these areas.↩

Featured image is a Government of India stamp issued on Immanuel Sekaran’s birth anniversary (9 October) in 2010.