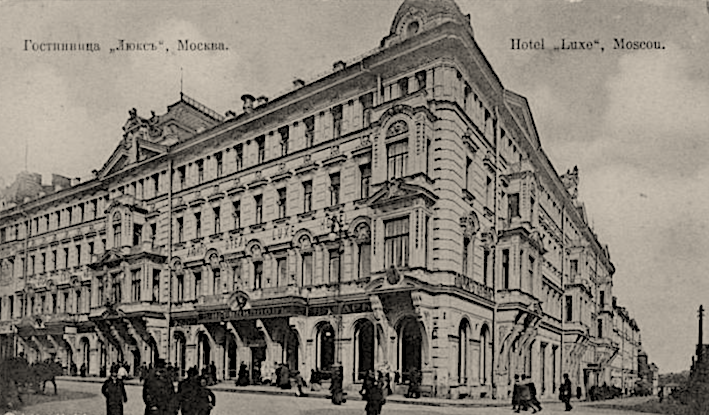 In late December 1920, members of the émigré CPI formed in Tashkent travelled by a slow train to Moscow. It was a luxurious journey. Despite the civil war induced scarcity heating was provided along with comfortable blankets, sheets and pillows. On the way, they talked about socialism and argued over politics in India. In Moscow, the former Muhajir students, Abdul Majid and Shaukat Usmsani, along with A.Q. Khan, an undercover British agent (and a great favourite of the Roy family) stayed at Hotel Delovoi Dvor and other places. Their daytime was spent mostly at Hotel Lux. A common room of Lux was utilized for holding some of the meetings of the ECCI (Executive Committee of the Communist International). These two hotels were the meeting places of world communist leaders. Sen Katayama from Japan, Tom Quelch from Britain, Kuusinen from Finland, Rakosi and Bela Kun from Hungary and several others were Lux residents while Zinoviev and Radek were regular visitors.

Delovoi Dvor, a huge hotel and office complex, had been built in a functional Neoclassical Revival style in pre-war Moscow during 1912-13 for commercial purposes. Yet it was Lux which was clearly the centre of political life and social gatherings linked with the Communist International. Requisitioned for the stay of Comintern activists and communist travellers from abroad, Hotel Lux was located on Tverskaya Street, one the main thoroughfares of Moscow. Photos of the building suggest the hotel had an imposing appearance; in terms of architectural style, it was a mix of Italian Renaissance and Baroque. 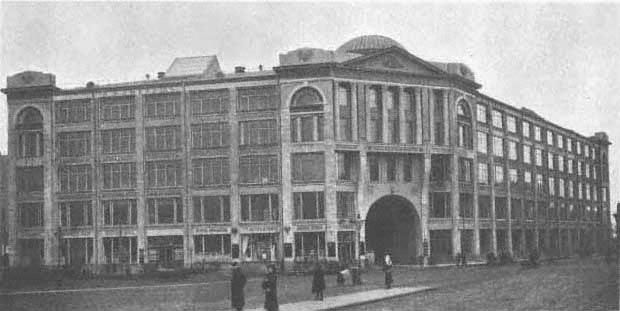 Shaukat Usmani offered descriptions of the ‘interesting personnel’ at the Comintern meetings at Lux:

‘The ECCI meetings in the Common Room of the Hotel Lux were very interesting occasions, when one could see the world Communist leaders at close quarters. It was interesting to see the tall lanky figure of Karl Radek, the shaggy bushy head of Zionviev and the stern face of Trotsky. And there was also Bukharin with his short stature but with plenty of wit and humour and a brain full of theories. There were many more of these world figures. Who can forget the thick brows and the heavy moustache of Stalin?

There were sometimes interesting incidents in Hotel Lux. And the most intriguing was once when Trotsky came to Hotel Lux. He had no identification papers. The writer also happened to be near the main landing of the Hotel and saw Trotsky arguing with the Red Army soldier mounting guard at the entrance to the stairs. The guard would not permit him and Trotsky would not budge an inch. “I am Trotsky,” said Trotsky, and the guard’s answer was “Nitchevo”. He would not yield to any frowns of Trotsky and insisted that Trotsky should produce some paper to establish his identity. The Receptionist could not intervene as it was a matter of discipline and because the most important figures of the world were engaged in the Common Room of the Hotel discussing problems of world interest. The compromise that worked was that a telephone ring from the Receptionist brought down Bukharin from upstairs who identified Trotsky and, thus, terminated an ugly situation. This was the Red Army discipline!’

It was the internationalist milieu of Lux and the union offices in Moscow which acted as their new political training ground. Usmani recalls studying Economics, Politics, and Trade Unionism. Since they did not know much Russian, they were trained by experts with knowledge of English. They were ‘coached’ by Fineberg, the economist and translator from Britain who came from a Polish-Jewish background. Borodin, Tom Quelch, the Balabanov couple and later Boris Reinstein, trade union leader and an American communist of Russian origin, were their teachers. These figures were perhaps chosen to instruct them precisely because they could communicate with the Indian Muhajir youth in English. In the afternoons, military classes were held. They would also visit Reinstein’s office to learn first-hand the way he organised the workers’ movements.

Occasionally, trips were organised; they were included in the excursions for the foreign visiting delegates from the West and sometimes from the East. One such enabled Usmani to visit Lenin at close quarters in the Kremlin. This meeting was a simple handshake when Lenin greeted the delegation from a foreign country. He was standing before the door of his working room, which was sparsely furnished with only a picture of Marx hanging on the wall. Usmani was struck by the ‘twinkle in his eyes and his disarming smile’. It was in the middle of April, 1921 that their preliminary studies at Moscow ended. When they returned to Moscow soon afterwards to join the newly opened University of the Toilers of the East, the Third Congress of the Comintern was about to begin. Lux was again a hub of revolutionaries, including exiles from India who could not stand each other for doctrinal and personal reasons. Abdur Rab and M.P.T. Acharya, expelled from the émigré Party after severe disagreements with Roy and Mukherji over organizational issues, were also staying at Lux. Members of the Berlin Group, Virendranath Chattopadhyaya and Bhupendranath Datta, Khankhoje, Dr Abdul Wahid, GhulamAmbia Khan Luhani, Nambiar and ‘many Guptas and Dasguptas’ who refused to join the émigré CPI were present. Unlike the other Indian students, Usmani, recovering from a serious illness, was allotted a room at Hotel Lux. So he witnessed the arguments closely. Despite these episodes of rupture, his descriptions suggest a life which was far from boring. M. N. Roy also offered a nostalgic account of the convivial atmosphere at Hotel Lux where Bolshevik leaders, foreign visitors and Comintern personnel mingled. Despite the material scarcity resulting from the after-effects of war and civil war, there was camaraderie, discussions, music and dancing that continued late into the night. Apparently, he was ‘in high demand’ as a witty conversationalist.