May Day at May Day Bookstore 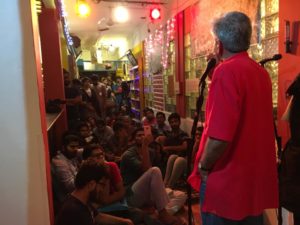 On May 1, the May Day Bookstore (run by LeftWord Books) completed five years.

Over these five years, the May Day event at the bookstore has become an important annual punctual point in Delhi’s political/cultural calendar. This is no mean feat, considering the location of the store — in West Delhi, in a neighbourhood with a large concentration of working people and migrants. NDTV covered the event in their 'Art Matters' section and here's a report about our unique vibrant community space:

As soon as the doors opened, there was a deluge of people walking in. There was barely place to stand!

And here’s the Newsclick.in report of how the day went:

As every year, the first few performances were open mic events, where people volunteered on the spot. These performers were: the poets Medha Singh, Muntaha, Anupam Tripathi, Chhatrapati, Paribhasha, Himani and Satyam Tiwari, Manola and, from South Africa, Xabiso.

And then there were the invited speakers and performers: Dhwani Vij, Annie Koshi, Sanjeev Kumar, Kuljeet Singh, Sanjna Kapoor, Vqueeram Aditya Sahai, Sumangala Damodaran, Saif Mahmood, Mukul Manglik(our barista for the day), Gautam Bhan and Rahul Ram with Sanjay Rajoura. The evening closed with some vigorous dancing, singing and sloganeering by Fiery Songs of the Soil.

Last year, we had done a simple survey on May Day — we counted how many people came. The number was a very impressive 480 (and we might have missed about 20 or so). But this year, the number was even more — we counted 504, and we certainly missed counting another 50-75! And of those we counted, here were the proportions:

We further did a slightly more detailed sample survey of 136 people (27% of the total), and here are the results:

And the overwhelming majority of them were very young — in fact, 95% were 40 or below:

As would be expected, there were a large number of students:

And in terms of geographical diversity, here’s what we had:

As many as 11% were visitors to Delhi, while 9% came from other parts of NCR (Gurgaon and NOIDA, mainly).

And none of this would have been possible, but for the absolutely amazing bunch of motivated and super fun volunteers we had. So, a big thanks to all who made this amazing day possible!

Lenin's statement about May Day stays with us: 'The mass participation of the workers in the strike, the huge mass meetings in the streets, the unfurling of Red flags, the presentation of demands indicated in leaflets and the revolutionary character of these demands - Eight-Hour Day and Political Liberty'.

Although, in our time, we might need to modify the slogan: Four-Hour Day for a Full Days Wage and Political Liberty.