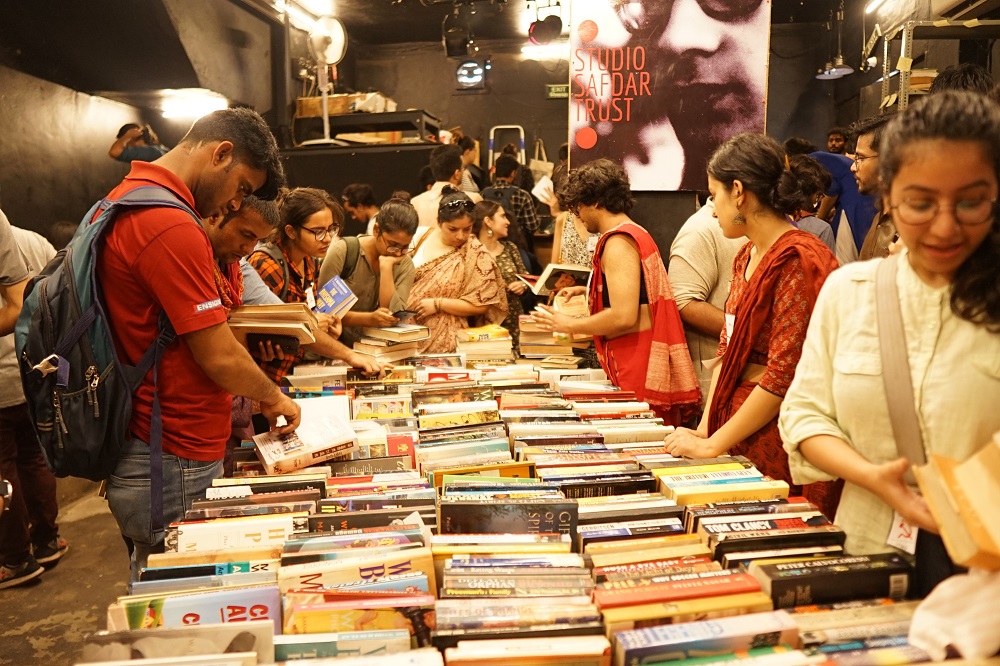 'There was barely place to stand!' is what we reported last year. But we broke our own record this year, with over 800 of you joining our May Day celebrations.

Amidst all the books, coffee, pastries and music, we went around asking you questions. Hope that didn't bother much. We were only trying to survey who was visiting us. The total number who agreed to take the survey was 144.

Here's what we found:

No, young people are not turning away from revolution! 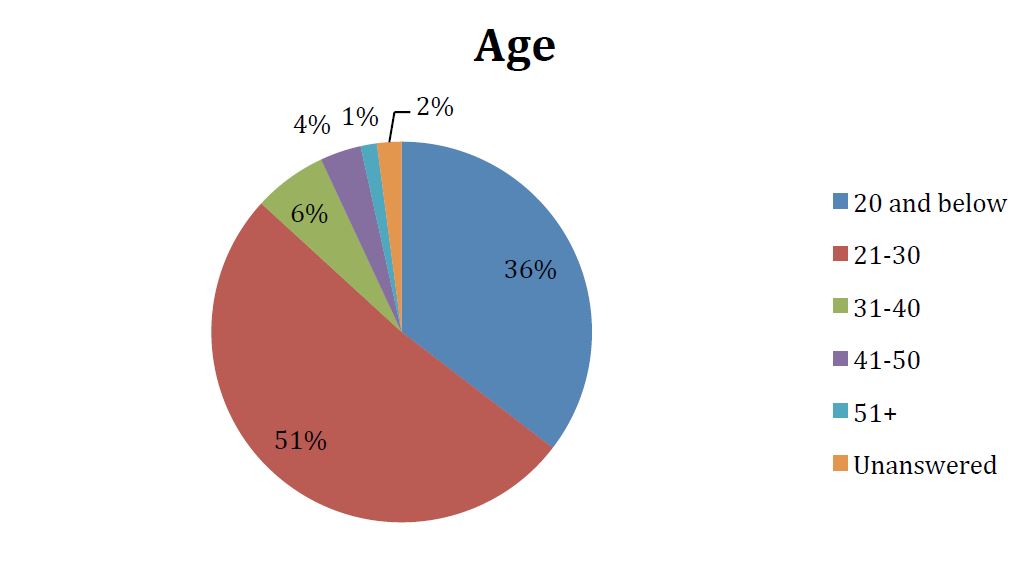 Boys, you need to start reading more (and being a little more cooperative with our survey). 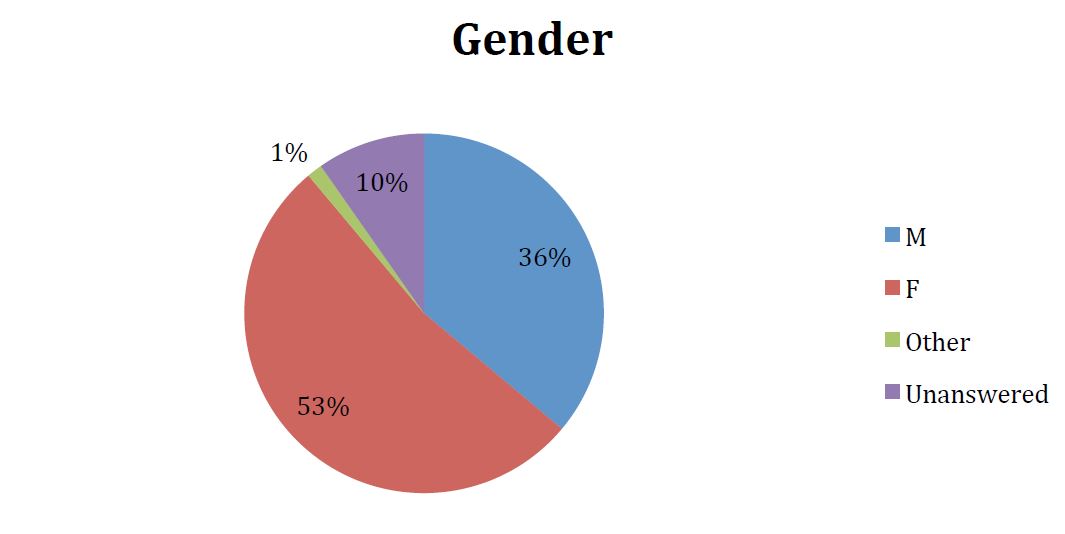 *Note: This may not necessarily indicate that the number of women was higher; given that the surveyors were women, it is likely that they may have approached more women to answer the survey OR, even if an equal number of all genders were asked, that women were more likely to have agreed.

Well, this came as no surprise.

- Students – all those who ticked the student option in the form, even if they followed it up by writing 'activist' or 'research scholar' alongside it: 113
- Teachers: 5
- Researchers: 2
- Arts Community – those who have identified themselves as members of the arts community, including writers, practitioners, cultural representatives, etc.: 4
- Other – includes all other legitimate occupations, including law, engineering, medicine, marketing, advertising, business: 11
- Unclear/Unemployed – this refers to all those who have mentioned an incomplete or unclear occupation, such as 'consultant' or 'freelance': 6

*In this section, we have provided two forms of charts for the same results, which have slightly variable visual impact – a column chart and a pie chart. 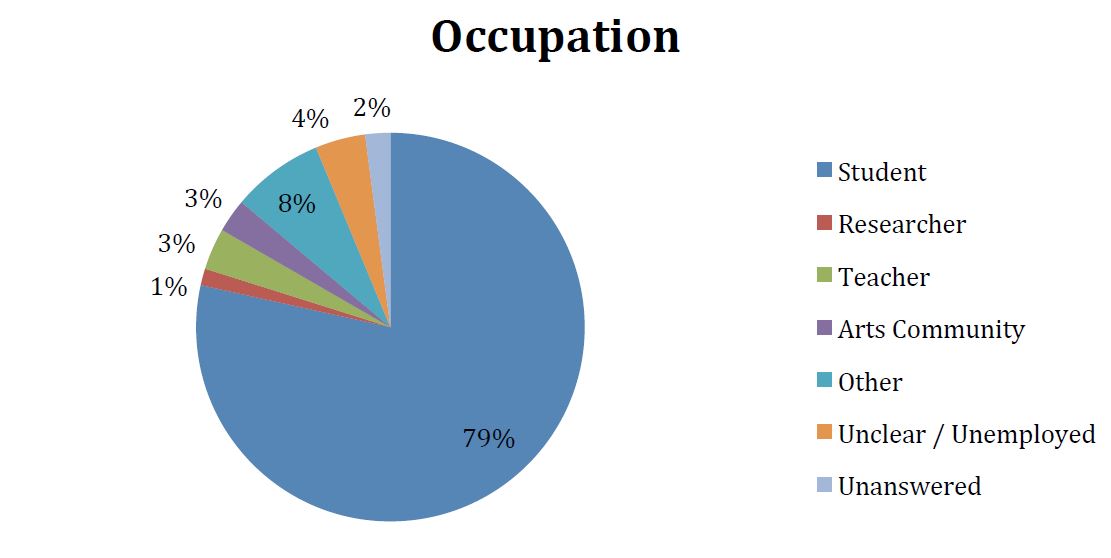 From the total results, given the overwhelming majority of students, the following chart shows the chart in terms of students vs. non-students: 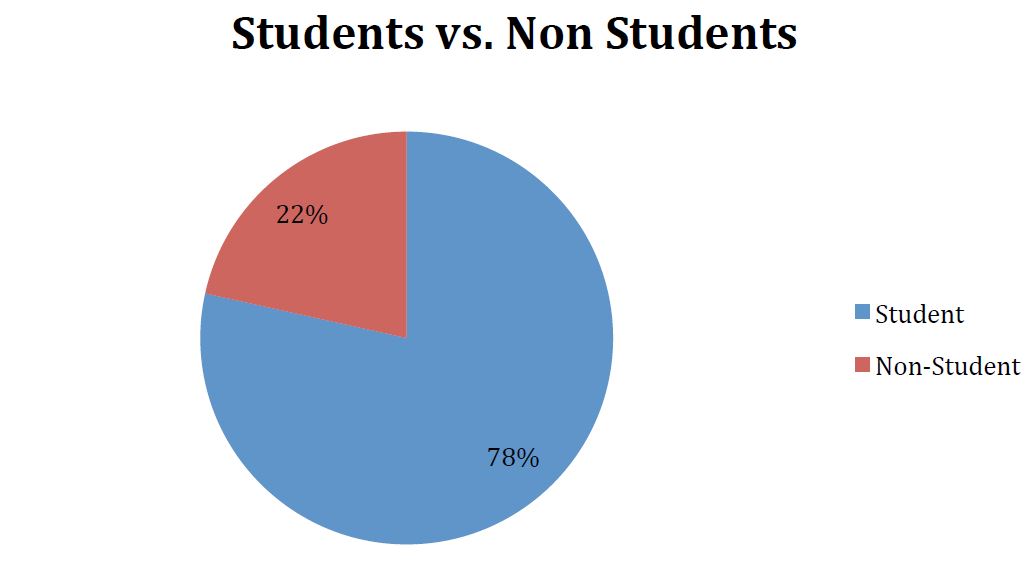 We agree, word of mouth is the best way to learn about something . . . other than books of course!

*Note: As per the raw data, most visitors mentioned that they heard about May Day from friends, specifically through the volunteers or others who have worked with or at May Day/Studio Safdar. 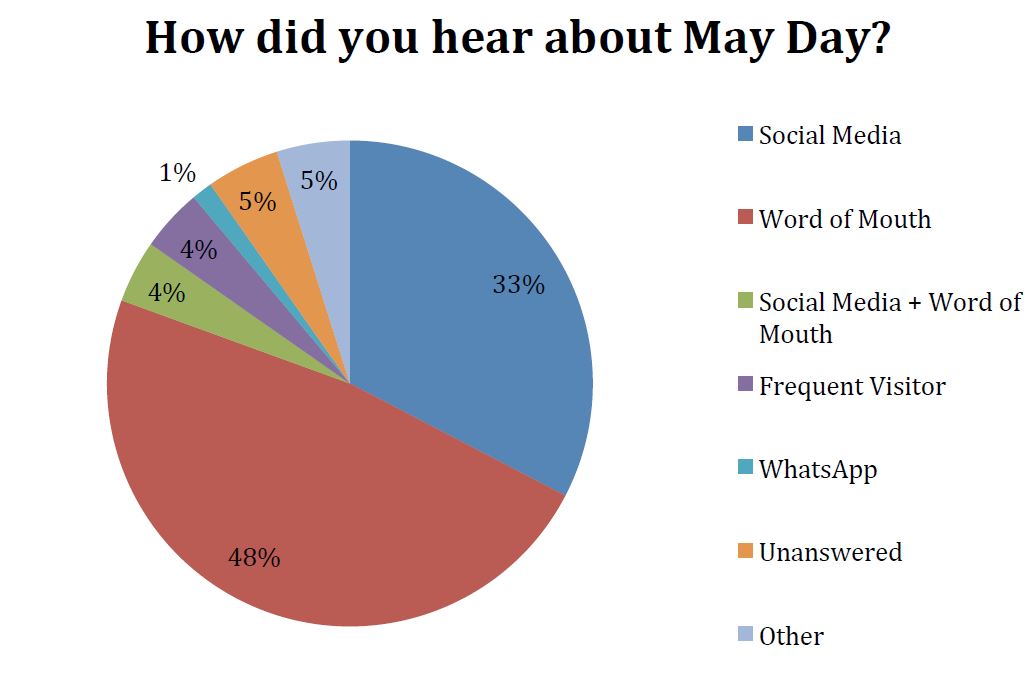 The following chart represents the breakdown of the social media section in the chart above: 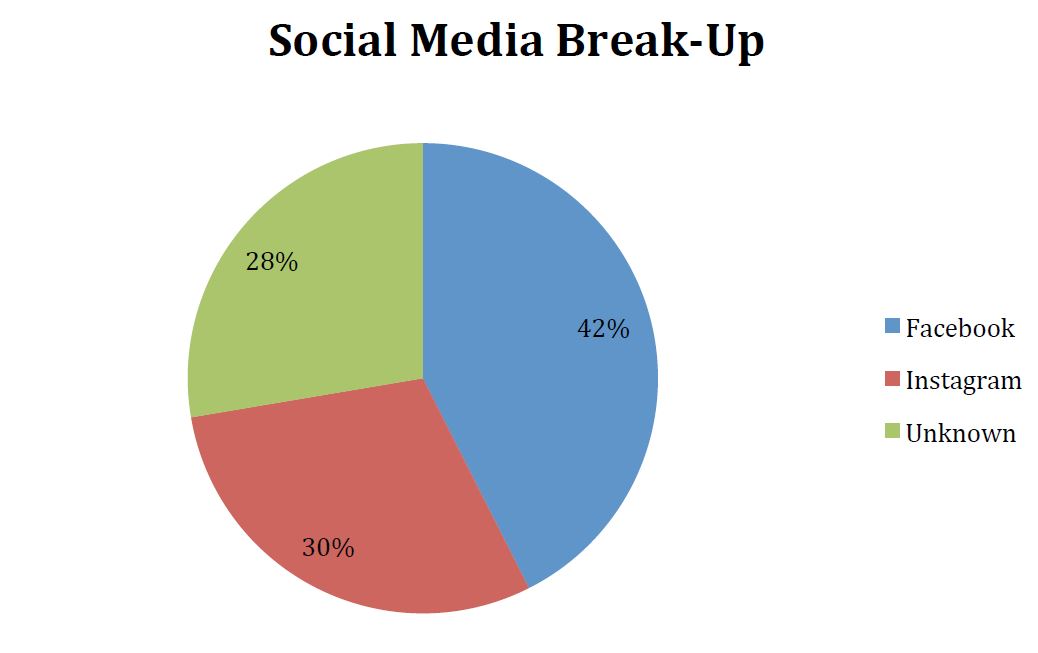 If you're not in the 'first-time visitor' category, you can certainly do better. 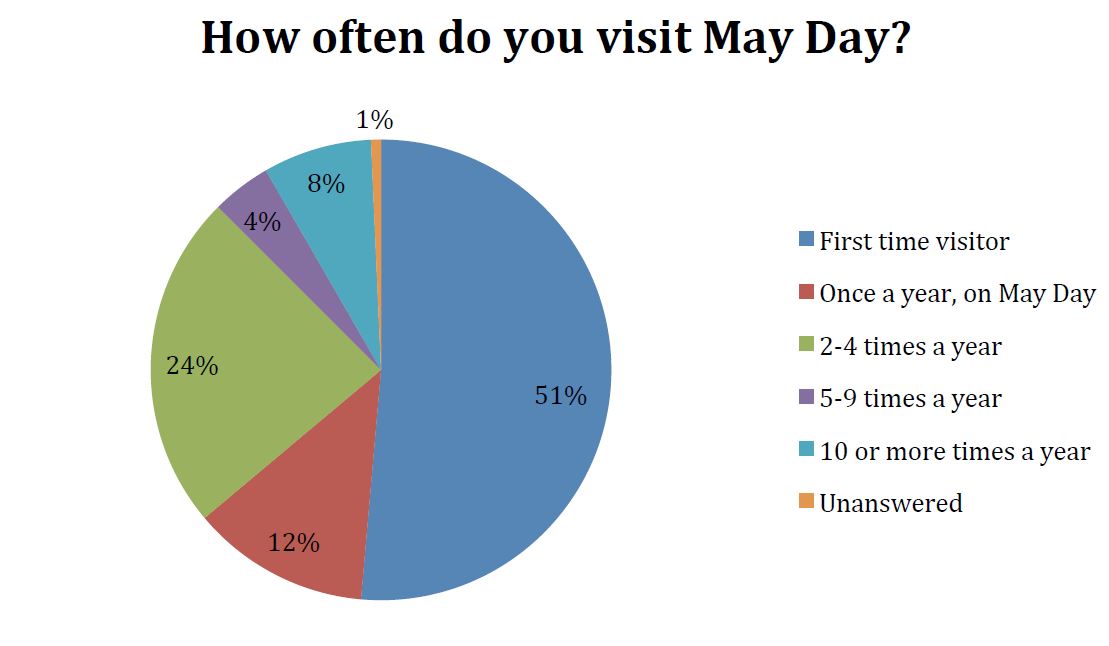 Such a large share from just North and South? C'mon, the rest of Delhi. 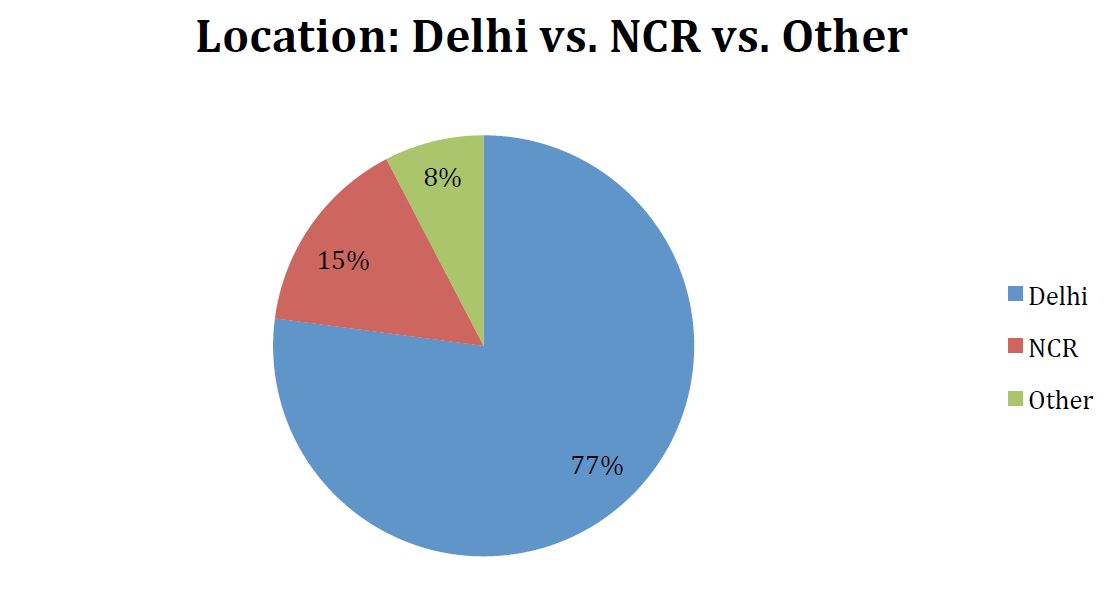 The following chart represents the same data reorganized as Delhi vs. NCR vs. Other: 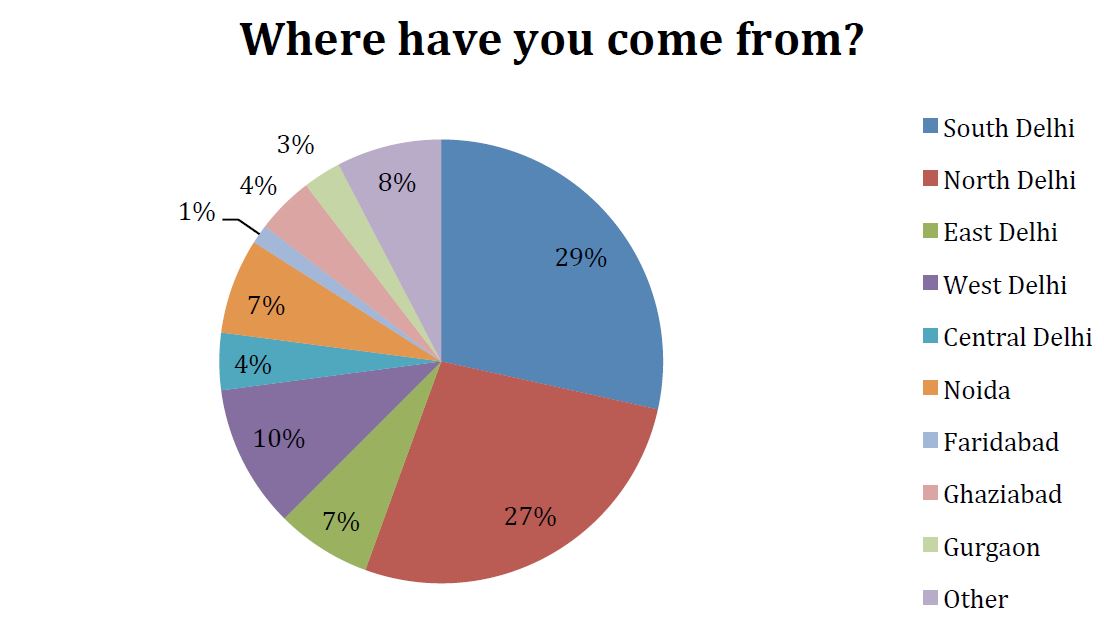 - The charts represent information as accurately as possible. In some instances, we have made categorizations based on assumptions and common knowledge, to support the readability of the data. These categorizations are given before each chart.
- It is important to keep in mind that the surveyors – those who went up to people to request them to answer questions – may have had their own biases, especially in terms of age and gender.