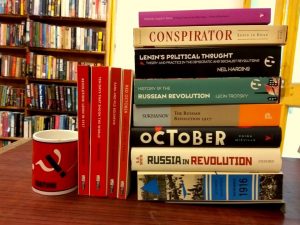 It's been hundred years of the Russian Revolution. In all these years, countless books have been written on the revolution, its aftermath and its impact on numerous first world and the third world societies. This reading list is an exploration of the events that changed the course of history and their effects on the world.

Note: All these books are available at our bookstore. We only have single copies of the titles from foreign independent publishers. The LeftWord titles are also available at our website. If you are interested, you can either visit us at the bookstore or call us at 011-25709456/9718763767 or you can also write to us at [email protected]

Ten Days That Shook the World by John Reed

The stirring eyewitness account of an epochal revolution. By one of the great reporters of all time. This edition also includes the 1919 ‘Introduction’ by Lenin; the 1923 Introduction by N. Krupskaya; John Reed’s Appendices; Letter from Louise Bryant to Max Eastman; and ‘The Biography of John Reed’ by Albert Rhys Williams.

October: The Story of the Russian Revolution by Chine Mieville

On the centenary of the Russian Revolution, China Miéville tells the extraordinary story of this pivotal moment in history. In February of 1917 Russia was a backwards, autocratic monarchy, mired in an unpopular war; by October, after not one but two revolutions, it had become the world’s first workers’ state, straining to be at the vanguard of global revolution. How did this unimaginable transformation take place?

In a panoramic sweep, stretching from St Petersburg and Moscow to the remotest villages of a sprawling empire, Miéville uncovers the catastrophes, intrigues and inspirations of 1917, in all their passion, drama and strangeness. Intervening in long-standing historical debates, but told with the reader new to the topic especially in mind, here is a breathtaking story of humanity at its greatest and most desperate; of a turning point for civilisation that still resonates loudly today.

History of the Russian Revolution by Leon Trotsky

Regarded by many as among the most powerful works of history ever written, this book offers an unparalleled account of one of the most pivotal and hotly debated events in world history. This book reveals, from the perspective of one of its central actors, the Russian Revolution’s profoundly democratic, emancipatory character. Originally published in three parts, Trotsky’s masterpiece is collected here in a single volume. It serves as the most vital and inspiring record of the Russian Revolution to date.

Russia in Revolution by S.A. Smith

The Russian Revolution of 1917 transformed the face of the Russian empire, politically, economically, socially, and culturally, and also profoundly affected the course of world history for the rest of the twentieth century. Now, to mark the centenary of this epochal event, historian Steve Smith presents a panoramic account of the history of the Russian empire, from the last years of the nineteenth century, through the First World War and the revolutions of 1917 and the establishment of the Bolshevik regime, to the end of the 1920s, when Stalin simultaneously unleashed violent collectivization of agriculture and crash industrialization upon Russian society.

Drawing on recent archivally-based scholarship, Russia in Revolution pays particular attention to the varying impact of the Revolution on the various groups that made up society: peasants, workers, non-Russian nationalities, the army, women and the family, young people, and the Church.

In this book, Bobrovskaya tells her story of material deprivation and spiritual elevation. A dedicated Bolshevik, she worked hard to build her party and to raise the confidence of Russia’s working-class and peasantry. She worked quietly and tirelessly, helping build the momentum towards both the 1905 and the 1917 Revolutions.

Available here on our website and also in our May Day Bookstore.

Red October: The Russian Revolution and the Communist Horizon

Leading communist intellectuals discuss the achievements and failures of the October Revolution. Red October is an invitation to rediscover the importance of the Russian Revolution, to explore how it faltered and to nudge us to consider the ghosts of that revolution in our own movements today.

Red Star Over the Third World by Vijay Prashad

Available on our website here. Also available in our bookstore.

The essential writings of Lenin, in a single volume, for the radical revolutionaries of today and tomorrow. Available at our website here.