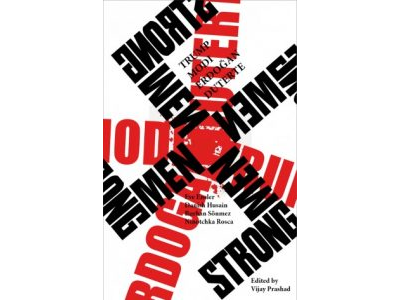 There is bad news and there is good news. The bad news is that the strongmen are going strong all over the world. Jair Bolsonaro, the most extreme far right leader, won the Presidential Elections and will become the new President of Brazil early next year. As pointed out by our chief editor Vijay Prashad, 'Brazil, the largest country in South America, has decided to go the way of the Philippines, the U.S., Hungary and the others.'

The good news is that Strongmen is also going strong. We are talking about our LeftWord title 'Strongmen: Trump-Modi-Erdoğan-Duterte'. Edited by Vijay Prashad, this book is a collection of fables in which four brilliant artists and writers confront four strongmen. Eve Ensler, Danish Husain, Burhan Sonmez and Ninotchka Rosca present accounts of Trump, Modi, Erdogan and Duterte.

OR Books came out with the US Edition of the book. Orjiit Sen designed the covers of both the Leftword and OR editions of the book. It has an additional essay by Lara Vapnyar, Russian-American novelist and journalist, on the manly origins of the Supreme Leader of All the Russias. There will be an event for this book at the People's Forum in New York City with Eve Ensler, Lara Vapnyar, Ninotchka Rosca and Vijay Prashad on 27 November.

The book recently got featured in Hindustan Times' list of '10 books to add to your bookshelf before the year ends'. In addition to this, the book is also shortlisted for the best printed book award in English Publishing Next Industry Awards 2018. Our book 'Rehearsing Freedom: The Story of a Theatre in Palestine' had won the Publishing Next Industry Award for Best Illustrated Book of the Year 2017.

Indian Cultural Forum and Scroll ran excerpts from Danish Husain’s fable on Modi. You can read them here and here. For Pune Mirror, Vinutha Mallya interviewed Eve Ensler, one of the contributors to the book. In her interview, Eve Ensler talked about her decision to not mention ‘Donald Trump’ by his name in her fable and rather refer to him as a virus and a narcissist. June 2018 saw the elections in Turkey where Tayyip Erdogan won the presidential elections. In a short interview for our blog, Burhan Sonmez talked about the possible aftermath of Erdogan’s victory and the challenges for the progressive forces in Turkey.