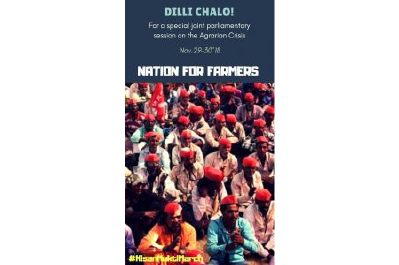 For too long, successive governments have ignored and been complicit in furthering the rural distress.  Its grave nature is reflected in the suicide of well over 300,000 farmers in last 20 years. The consequences are no longer restricted to the Agriculture sector alone. It has now become a crisis of the society and civilization as well.

Many Farmers' groups will march as Kisan Mukti March to the Indian Parliament in Delhi on November 29-30 demanding a special session of the Parliament dedicated to address the agrarian crisis. At LeftWord Books, we extend our full support to this March.  For more details, visit https://dillichalo.in/. Sign the petition to the President of India. You can also volunteer to help organize the march.

Following is a list of books that can help you understand the intensity of agrarian crisis that we're witnessing.

1. Everybody Loves a Good Drought: Stories from India's Poorest Districts

In the dry language of development reports and economic projections, the true misery of the 312 million who live below the poverty line, or the 26 million displaced by various projects, or the 13 million who suffer from tuberculosis gets overlooked. In this thoroughly researched study of the poorest of the poor, we get to see how they manage, what sustains them, and the efforts, often ludicrous, to do something for them. Read more.

2. Red Flag of the Warlis: History of an Ongoing Struggle

This book is about the struggles for survival and dignity of the Warli Adivasis in Talasari and Dahanu talukas of Thane district (now in Palghar district after bifurcation) in Maharashtra. It is based on a series of oral history interviews with veteran and contemporary Kisan Sabha activists. Read more.

3. The Kisan Long March in Maharashtra

This book documents one of the more inspiring struggles of our time – the fight of the Kisan of Maharashtra against a government committed to money more than people. How did it come about? What were the causes that led to it? Read more.

4. How Do Small Farmers Fare? Evidence from Village Studies in India

The essays in this volume seek to examine the socio-economic characteristics of small farmers in relation to other strata of the rural population, drawing on empirical material collected through carefully designed and conducted household and farm economy surveys of 17 villages located in 9 States of India. These surveys are a part of the ongoing Project on Agrarian Relations in India (PARI), undertaken by the Foundation for Agrarian Studies (FAS). Read more.

5.  Socio-Economic Surveys of Three Villages in Karnataka: A Study of Agrarian Relations

The study villages are Alabujanahalli in Maddur taluk, Mandya district; Siresandra in Kolar taluk, Kolar district; and Zhapur in Kalaburagi (Gulbarga) taluk, Kalaburagi district. The report presents an analysis of statistical data collected through the village surveys with a special focus on differences across socio-economic classes and social groups. The report attempts to contribute to the discussion on agrarian relations and economic distress in contemporary rural Karnataka. Read more.

6. Is This 'Azaadi'? Everyday Lives of Dalit Agricultural Labourers in a Bihar Village

Based on the testimonies of several Dalit labourers in a Bihar village, it highlights the betrayal of the promise of social, economic and political justice that underlay the struggle for independence – a promise that is at the heart of the Indian Constitution. It describes the everyday problems faced by the labourers in accessing the basic necessities of existence, including food, clothing, shelter, healthcare and education. Read more.

This sensitive novel explores the fallout of the agrarian crisis, especially in Maharashtra, where a fifth of the 310,000 farmer suicides recorded across twenty years have occurred. A moving and humane tale of that great catastrophe, it reflects damage and despair, but also a hope for change amidst one of the greatest tragedies of our time. Read more.