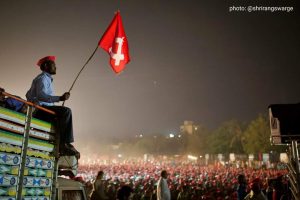 ‘No favors, we want our rights.’

On 6 March, about 20,000 farmers from Maharashtra mobilized by CPI (M)-affiliated All India Kisan Sabha (AIKS) began their 200-km march to Mumbai from Nashik. The plan was to indefinitely gherao the Assembly while the Budget session was on and demand immediate resolution of the life-and-death issues facing farmers. The march swelled to around 35,000 farmers as they walked in the heat for six days and reached Mumbai on March 11.

The farmers received enormous support from all sections of society. To avoid inconveniencing students who had an exam that day, the farmers walked overnight to Azad Maidan. News, photos and videos of the Long March trended on social media. Mainstream news outlets were forced to cover the march. With an outpouring of support and sympathy from the public at large, the opposition parties – and BJP ally Shiv Sena – came out in support of farmers’ demands. The BJP government had no option. It had to buckle and concede all the demands of the farmers, and agree to a timetable for their implementation.

It has been a stupendous victory – from despair and suicide, farmers have crossed over to hope and struggle. The pattern is repeated in many parts of the country – apart from Maharashtra, there have been big struggles in Rajasthan, Tamil Nadu, Himachal Pradesh, etc. And the list is growing.

The protesting farmers did not materialize out of thin air. AIKS has worked among them for decades. Here is a recent book from LeftWord, authored by Prof. Archana Prasad, on the history of the kisan movement in the Thane region, near Mumbai.