I visited Goa and did not party 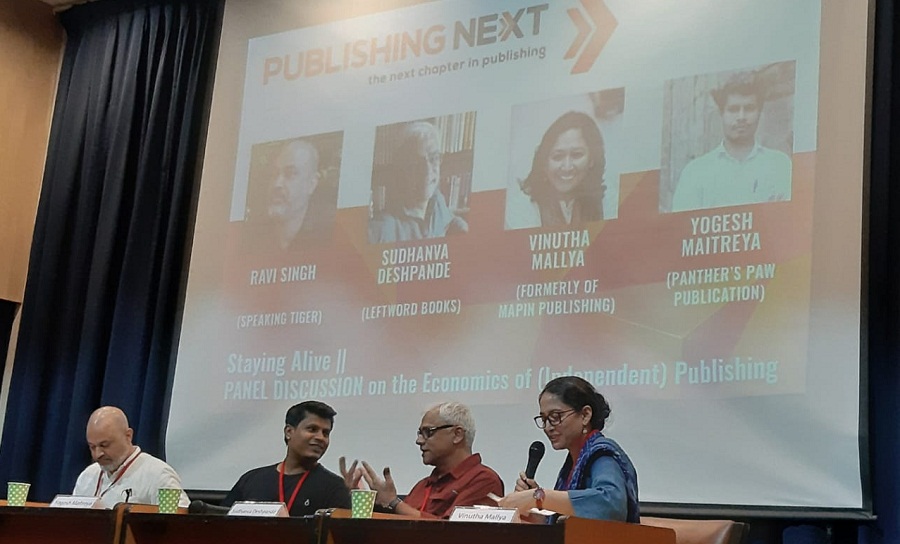 I visited Goa and did not party. While one could agree with those who might feel sorry for me, the conference-cum-workshop I went there to attend was worth it.

The world of independent publishing can appear to be a small one. The word ‘cozy’ came up several times to describe the conference. Most people who’re in it know each other. The ones who didn’t, do now. Far from making them homogeneous, however, it makes them a unified group of diverse individuals.

What makes them unified?

This was a free-thinking and strong-willed, almost obstinate, motley bunch. Some very old, some still quite young, and many in between. Attending a conference was not going to unite them if they didn’t want to. And their ideology, for lack of a better word, is not what unifies them either. Perhaps something Ritu Menon – co-founder, Kali for Women, and founder, Women Unlimited – said in the final session of the conference (‘Bibliodiversity: Resisting Monocultures of the Mind’) explains best what I mean. Mildly exasperated by all the talk of the ‘market’, though recognizing its importance, she stressed the word ‘society’. ‘We don’t live in a market, we live in society . . . civilized society.’ For her, the primary objective of independent publishers such as herself, maybe even civilization itself, is to make interventions in society. To make it better. It’s this dream that makes them give up promising careers in established publishing houses (the ‘bigs’), among other lucrative jobs, to start their own (the ‘smalls’ as they are sometimes referred to). These ‘smalls’, led by people frustrated with the fact that readers are being deprived of socially relevant books and ideas, wish to fill gaps, quite large as I discovered, left by the ‘bigs’. And they’ll face all challenges thrown at them by the world for their dream.

Which brings us to the second thing that unites them – hardship. This aspect of independent publishing was best exemplified by the gritty Yogesh Maitreya, who started Panther’s Paw Publication on his own initiative, saddened by the exclusion of Dalit literature in good English translations. Yogesh won hearts with his endearing honesty. Faced with this sizeable crowd, occasionally scratching his head, he told us that he knew next to nothing about publishing when starting out. He remembered the time when he had to google the publishing process, how one gets an ISBN number, how one gets ones books printed, and so on. He fondly spoke of all those who helped him, monetarily and otherwise, not merely out of the goodness of their hearts, but because of a shared vision for a better world. He also told us that his hostel room at TISS, Mumbai, doubles as his workspace-cum-warehouse! Despite all the trouble, and despite the rigorous demands of his academic life, it’s unlikely that he’ll stop publishing though.

With that said, they’re anything but united in the way they do things. From deciding the size of print runs, to the pricing of the books, academic or trade, from minor editorial interventions like when, if and how to rewrite a sentence to the need for editors at all, we saw a range of opinions.

On that last point, about the need for editors, it might be useful to look at some new ventures that have started quite recently in publishing. These, the ones being referred to, provide authors a kind of do-it-yourself online platform/tool that allows them to self-publish their books and make them available on print-on-demand to customers. In theory, no intervention – other than vetting the books for illegal stuff or formatting errors, done fairly easily with enterprise-grade software meant for the purpose – is required. In the very first session, Indu Chandrasekhar and Ritu Menon spoke about how decision-making in publishing passed from the editorial to marketing over the past several decades. A case could readily be made here for completely democratizing publishing by making self-publishing a matter of a mouse click – let the readers decide what they want; let editors and marketing people just do their respective jobs.

Of course, few would argue that editors could be done away with so easily. I guess my job is safe . . . for now.

The Publishing Next 2019 conference was organized at the Science Centre, Miramar, Goa, from 19 to 22 September 2019.