How Modi pipped Advani for the ‘Pradhan Sevak’ prize 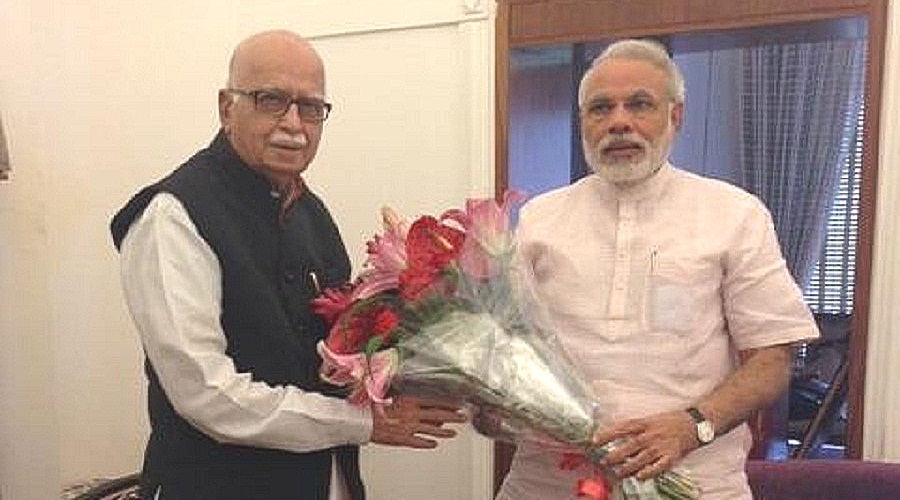 It is hard to have escaped the mania our fellow citizens seemed to have been gripped by recently, on the first of the so-called Janata Curfews. Those impressed by Narendra Modi’s ‘humble’ words being heeded by millions could do well to ask why the man chose not to use his popularity to stem the ‘riots’ that rattled the capital this year. The answer, for those not blinded by chauvinism, is rather simple – he’s a product of an organisation that wants a man just like him as our prime minister.

A.G. Noorani’s The RSS: A Menace to India, published by LeftWord Books last year, devotes a chapter to this. While we would highly encourage you to read the whole book for a complete account of the machinations that led to Modi’s anointment as PM by the RSS, the following extract from that chapter gives a glimpse of the fight between him and L.K. Advani, and shows just how tenuous the unity is within the BJP.

To see how the ground for Narendra Modi was prepared by the Congress, see Modinama: Issues That Did Not Matter by Subhash Gatade. Also see Decoding the RSS by Raosaheb Kasbe, an English translation of his 1978 work Zot (Searchlight) for a primer on the duplicity of RSS’s leading ideologue, M.S. Golwalkar.

On 20 October 2013, The Indian Express carried this interesting report from Mumbai:

RSS Chief Mohan Bhagwat has said: the Sangh Parivar has not yet decided on a PM candidate. Bhagwat was in Mumbai to attend a Conclave on nation building through social sectors. Last week, BJP national president L.K. Advani had met Bhagwat in Nagpur. Advani said he was holding discussions with the top RSS leadership on his proposed rath yatra against corruption.

Neither was being truthful. Bhagwat and the RSS had already selected Modi for the job. Advani was not seeking Nagpur’s approval for his favourite ploy, the yatra; but to canvas support for his candidature to the office of prime minister. What escaped notice was the RSS’s arrogation publicly of a right to select India’s future prime minister from one of its own fold.

The Constitution of India establishes a secular and democratic polity. Fundamentally, as the RSS chief Sudarshan repeatedly said, the RSS is for scrapping this Constitution which it says is imbued with Western values. … [T]he entire Constitution and the values it represents clash with the RSS’s ideology and the values it fosters. Yet it is this fascist body which functions in secret and on the leader principle which will select a person who will preside over India’s democratic and secular polity.

Tightening its control over the BJP was not such a difficult problem for the RSS. Its assets were many. With Vajpayee and Advani out, there was none to seek accommodation for his ‘political judgment’; i.e. tactical compulsions. The path was not a smooth one, though. The RSS had not reckoned with the ferocity of Advani’s ambition, his talent for intrigue and his capacity to struggle doggedly, shamelessly to return to his former pre-eminence. He fought hard from 2006 till 2014 when Narendra Modi was confirmed in the post of prime minister. As Adlai Stevenson said of Estes Kefauver, ‘There is such a thing as wanting to be President of the United States too badly.’

Nor did Modi have an easy ride. Rajnath Singh, who had taken over from Advani, was formally elected for a full three-year term as BJP president, with Vajpayee’s support, on 26 November 2006.

Two months later, he dropped Modi from the parliamentary board on 29 January 2007. Sanjay Joshi was replaced by an RSS pracharak Ram Lal. He had been inducted into the BJP in October 2006. This was perceived as a blow to his supporter Advani.

Nearer the Lok Sabha elections ‘a senior Sangh Parivar leader’ said, ‘Our aim is to develop a Hindu vote bank by the 2019 Lok Sabha elections. No political party will be able to ignore the Hindus’ concerns if it wants to do well in the elections.’ It was Golwalkar’s year-long birth centenary celebrations. Invites were sent to all the parties for a massive show of saffron strength. None outside the Parivar came.

Political equations change with the change of fortunes at the polls. The RSS came under strong criticism after the BJP’s debacle in the Uttar Pradesh elections. A senior leader squarely blamed the RSS: ‘You can say that the Sangh was in charge of everything from election management to media affairs. They have to share some responsibility.’ The Sangh interfered in distribution of BJP’s tickets as well. ‘The BJP suffered in a number of constituencies … because the RSS insisted on their favourites being fielded, the sources said.’ The ‘cultural body’ is not invincible despite its long-held position as a monitor of the Hindutva class. M.M. Joshi, for example, rushed to Nagpur to explain ‘differences’ among the BJP leaders; none of whom, apparently, thought much of him. Rajnath Singh was then in New Delhi for talks between the RSS and the BJP’s ‘organisational leaders’. Joshi bitterly complained, ‘The party has turned into a divided house, which is getting divided everyday.’ A ‘cultural’ body is uniquely qualified to inject culture in a political party.

It was a messy situation to which Rajnath Singh made his own contribution. He said that ‘the Sangh was influencing crucial appointments in the party’. RSS had played a role in the ouster of Gujarat Chief Minister Narendra Modi from the central parliamentary board as well as the removal of Arun Jaitley as chief spokesperson as part of the reshuffle he effected earlier that year.

Responding to a question about his controversial move against Modi and Jaitley, the BJP chief made light of the issue and said that he had taken the concurrence of the Sangh leadership. ‘The media made too much of it. These were routine changes. Okay, the RSS was consulted. In Modi’s case, it was 70% RSS and 30% my decision. In Jaitley’s case, the responsibility was 50:50.’

The Sangh leadership was not amused by the statement which could be a weapon in its critics’ hands. Approached by The Times of India, an RSS leader Ram Madhav said, ‘He has to clarify what he means by 70% and 30%. Decisions are taken by the party. You can consult anyone including the RSS, that’s a normal practice, but on what basis do you say that the decisions were taken by the Sangh … of course there is a possibility that he (Singh) may have been misquoted’ – the last refuge of a politician.

Gujarat was also set for elections. Modi’s battle cry was that it was the ‘number one State in Asia’. Vidya Subramaniam, who interviewed him, reported:

Yet the Chief Minister was to turn hostile on the question of Muslims. Asked where Muslims figured in his vision of Gujarat, he flared up. ‘I don’t like this thinking. I work for five-and-a-half crore Gujaratis. For me, anyone who lives here is a Gujarati, and I will not allow politics to come into this.’

If only this were true.

A senior minority leader of the party said,

‘We have been barred from entering Gujarat till the polls,’ recalling how minority leaders were kept aside in the Uttar Pradesh Assembly elections a few months ago. If BJP insiders are to be believed the fight is not against the Congress. It is ‘BJP versus BJP. Modi is an asset as well as a liability’.

But Modi had an impact at the national level in the BJP. Rajnath Singh could declare, as he did on 27 January 2008, that Vajpayee had passed on the baton to Advani. But Vajpayee was absent from the conclave of the top BJP leaders and did not send a message either. Modi ‘was the star attraction winning accolades on his victory in the recent Assembly elections’. Not one to miss an opportunity for self-projection, Advani presented himself as the natural choice for prime minister while describing Modi as a ‘truly secular leader’. The theme of the conclave was ‘Good Governance, Development’. But as Varghese K. George noted it ‘had substantial component of conventional Hindutva repackaged in contemporary idioms’.

Shortly thereafter Advani anointed Modi as his likely successor in the BJP. He had proved his mettle much better than his peers. A correspondent Hemendra Singh Bartwal, perceptively noted:

There is already a sense of unease in a section of the party’s central leadership over Modi’s enhanced stature and his soaring popularity with the party cadres after the BJP’s resounding victory in the Gujarat assembly elections under his charge. The victory had sparked speculation that he may even pose a threat to Advani’s claim as the NDA’s prime ministerial candidate. This was, however, quickly quashed with the official announcement shortly thereafter that Advani would lead the alliance in the next parliamentary election as its prime ministerial candidate.

That Modi had been accepted in the party as an important leader whose stature and clout extended much beyond Gujarat became evident when he was invited to participate in a meeting of the BJP’s core strategy group at Advani’s residence soon after the party victories in Gujarat and Himachal Pradesh. He was the only BJP chief minister asked to the distinguished gathering of top party leaders headed by Advani and Rajnath Singh.

Subsequently, at the BJP national executive meet in Delhi lavish praise was showered on Modi by Advani and other senior leaders for the developmental achievements and administrative acumen. This ruffled the feathers of other chief ministers like Rajasthan’s Vasundhara Raje, Shivraj Singh Chouhan of MP and Raman Singh of Chhattisgarh.

This was six years before Modi pipped Advani to the post.

Advani kept hammering at his pet theme [the yatra] oblivious of the fact that the ground was slipping away beneath his feet. …