"He spoke truth to and about the Power"- P. Sainath on John Reed 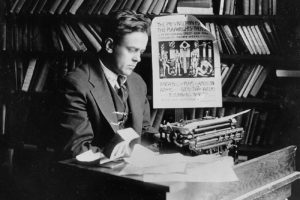 We, at LeftWord Books, recently published John Reed's "stirring eyewitness account" of the Russian Revolution, 'Ten Days That Shook the World' with an introduction by one of India's finest journalists and public intellectuals P. Sainath. In Howard Zinn's words, Reed "made history come alive for the readers of popular magazines and impoverished radical monthlies" through his journalistic work in the times preceding and during the First World War when warmongering and binary narratives were the ways in which the mainstream press catered to the capitalistic war interests of the political as well as the industrial elites. In his introduction, Sainath delves into the character that John Reed was and what made him one of the most admirable reporters of his era whose work and life is still relevant in the 21st century.

Here is an excerpt from Sainath's introduction...

There was also this difference between Reed and so many of the “star journalists” of today. He did not return from exotic locales with “war stories” of which he was himself the focus. No “Christiane Amanpour in Baghdad” nor “Anderson Cooper on Syria’s border”— where the war in those countries is less important than the mere presence of these television icons on their soil, however briefly.

CNN’s own promos leave you in no doubt as to who makes the story—and it’s not the natives, not even the friendly ones. Ten Days That Shook the World was not promoted as “John Reed from Red Square.” There was a revolution in Russia. He covered it. He was not invisible in his reporting but was clear that he wasn’t the story. And he was consistent: the principles he stood for in Mexico and in Russia were also those he practiced at home. Within the United States, he covered—and participated in—the struggles of workers, miners, and other poor people. As the historian Howard Zinn put it of Reed:

He rushed into the centre of wars and revolutions, strikes and demonstrations, with the eye of a movie camera, before there was one, and the memory of a tape recorder, before that existed. He made history come alive for the readers of popular magazines and impoverished radical monthlies.

Reed was moved by the silk weavers’ and workers’ strike in Paterson, New Jersey. And was arrested in 1913 while trying to speak for the strikers (the first of many times he would be arrested in his lifetime). Deeply moved by the brutal crackdown on the workers, he went on to stage a pageant recreating scenes from those battles—in New York’s old Madison Square Garden. As many as 1,200 strikers were reported to have participated in the pageant. Many thousands more came to watch the spectacle. Reed probably hoped the pageant would also work as a benefit performance for and by the strikers.

In Colorado, he covered the miners’ strike of 1913-14 which the Rockefellers and other mining interests of the day moved to crush with great barbarism. Reed arrived there a few days after the infamous Ludlow massacre which saw the Colorado National Guard attack a settlement of over a thousand workers. The workers fought back. Estimates of the number of deaths vary but are all saddening. In all, perhaps, over two dozen people died at Ludlow, several in firing—the Guard used machine guns—and also 11 children and 2 women who suffocated to death in the miners’ camp, owing to fires the Guard had set to burn the tents. More lives were lost in the days that followed, in Guard action and in rioting. Still more were slain in the other battles of the “Colorado Coalfield War.” Overall, from differing estimates, it would seem the total ran to over a hundred deaths in the “war.”

In three hours every striker for 50 miles in either direction knows that the militia and mine guards had burned women and children to death. Monday night they started, with all the guns they could lay their hands on, for the scene of the action at Ludlow. All night long the roads were filled with ragged mobs of armed men pouring towards the Black Hills. And not only strikers went. In Aguilar, Walsenburg and Trinidad, clerks, cab drivers, chauffeurs, school teachers, and even bankers seized their guns and started for the front. It was as if the fire started at Ludlow had set the whole country aflame.

Contrast that with the New York Times calling for the use of force in the Colorado War:

With the deadliest weapons of civilization in the hands of savage Introduction mined men, there can be no telling to what lengths the war in Colorado will go unless it is quelled by force . . . The President should turn his attention from Mexico long enough to take stern measures in Colorado.

Reed was fiercely independent, truthful, but did not pretend to be neutral—a distinction completely lost with the onset of corporate-driven journalism.