In March 1951, Jacobo Árbenz Guzmán took office as the President of Guatemala. The landless movement and the Left had fought to elect a president who decided to push through a moderate land reform agenda. Such a project threatened to undercut the land holding of the United Fruit Company, a US conglomerate that strangled this American nation. The CIA got to work. To ‘remove covertly, and without bloodshed if possible, the menace of the present Communist-controlled government in Guatemala’, the CIA launched a covert operation – the innocuously named PBSUCCESS. Below is a faux-real-time account of the 1954 Guatemalan coup d’état, 11 days that didn’t shake the world as much as they ought to have.

For a more detailed picture, check out Vijay Prashad’s Washington Bullets, available as an ebook. 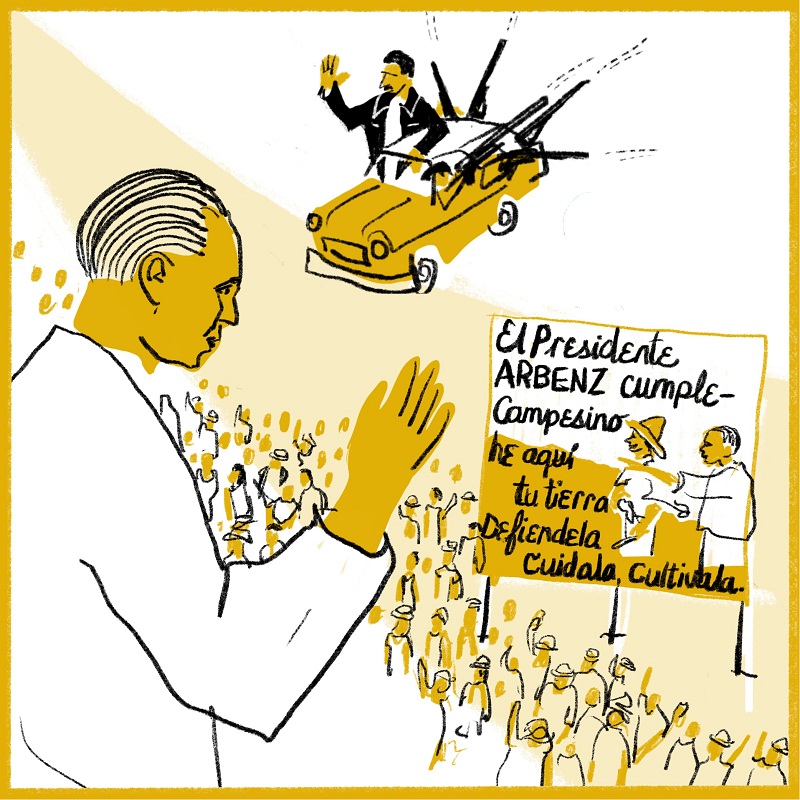 Guatemala City. 18 June (Friday). President Jacob Árbenz held a mass rally today at the railway station. He defiantly said that he would not stop his government’s programme of agricultural reform. The previous day, he said, Salvadorian policemen had discovered a wagon at the El Salvador-Guatemala border carrying machine guns, rifles, and grenades. The men with these arms had been arrested by the Salvadorian police; they were bound for Guatemala. Árbenz said that such coup attempts should not intimidate the Guatemalan people. While Árbenz spoke, mysterious fighter aircraft flew low over the rally. These aircraft had no identifying marks. At around the same time, at 8.20 pm, a former Guatemalan military officer Carlos Castillo Armas – dressed in a leather jacket and chequered shirt – drove across the border in a station wagon; he was accompanied by a group of armed men. Tensions are high in Guatemala. Rumours suggest that this is a US-backed coup. 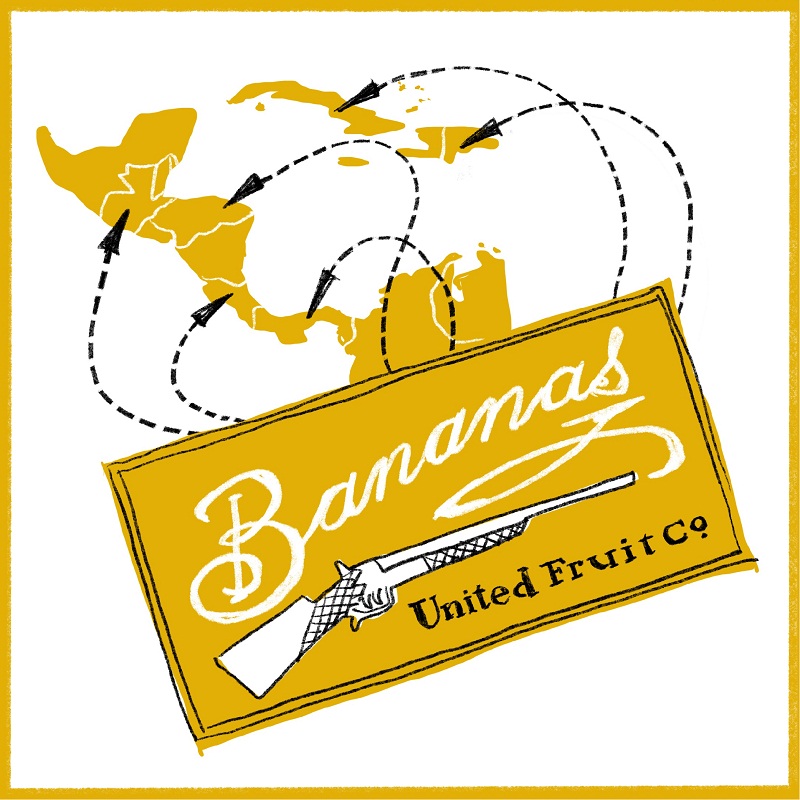 Guatemala City. 19 June (Saturday). Late on Friday night, Guatemala’s Foreign Minister Guillermo Toreillo approached the United Nations to intervene to stop the armed incursion. He blamed Nicaragua, Honduras, and the United Fruit Company of the USA. A British official said, ‘despite the United Fruit Company, the United States does not yet own all of Central America and the Caribbean’. On Saturday morning, an important railroad bridge in Gualán, in the department of Zacapa and not far from the Honduras-Guatemala border, was bombed from the air. The bridge is now destroyed. Reports are coming in from different parts of the country that cargo planes have dropped pallets of arms. There is a rumour that the Guatemalan army is prepared to mutiny against the government of President Jacob Árbenz. All kinds of transport – cars and carts – are being used to ferry a large part of the population into the outskirts of Guatemala City. Fear grips the capital. 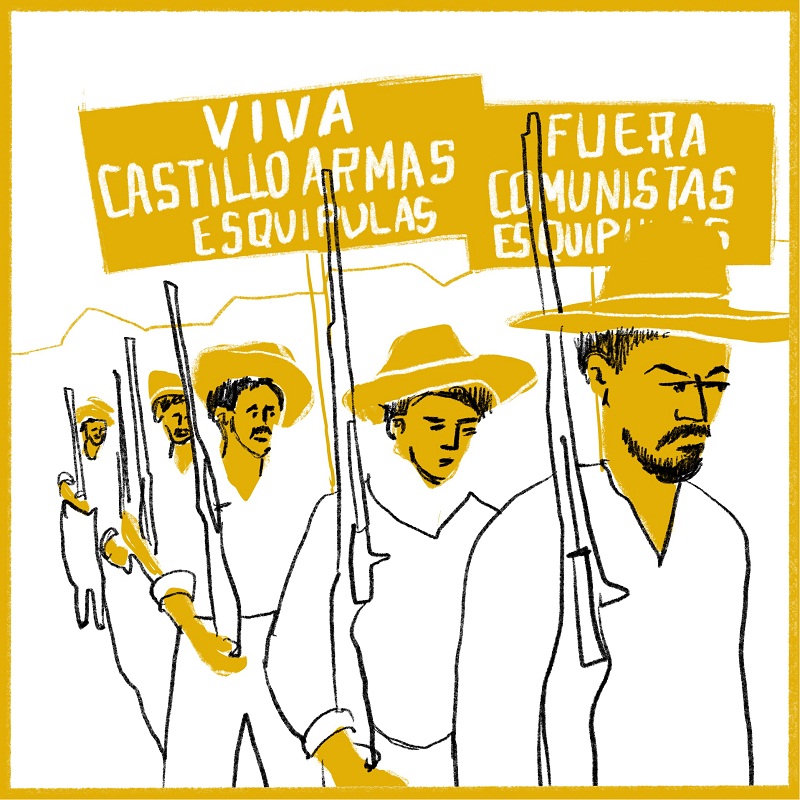 Guatemala City. 20 June (Sunday). President Jacob Árbenz announced that he had deployed the Guatemalan Army from the Base Militar and the Guardia de Honor to attack the rebel columns that appear to be moving towards the capital city from four directions. Castillo Armas’ forces have captured Esquipulas, three miles from the border with Honduras in the department of Chiquimula. In the northeast, near Zacapa, Lt. César Augusto Silva Girón led the Guatemalan Army to a victory over the invading force. In New York, the United Nations Security Council approved a French resolution that asked all UN member states to refrain from aiding the insurgency. The United States supported the measure, although rumours continue to fly about that this invasion is authorised by the US government. The US State Department has made no official comment. 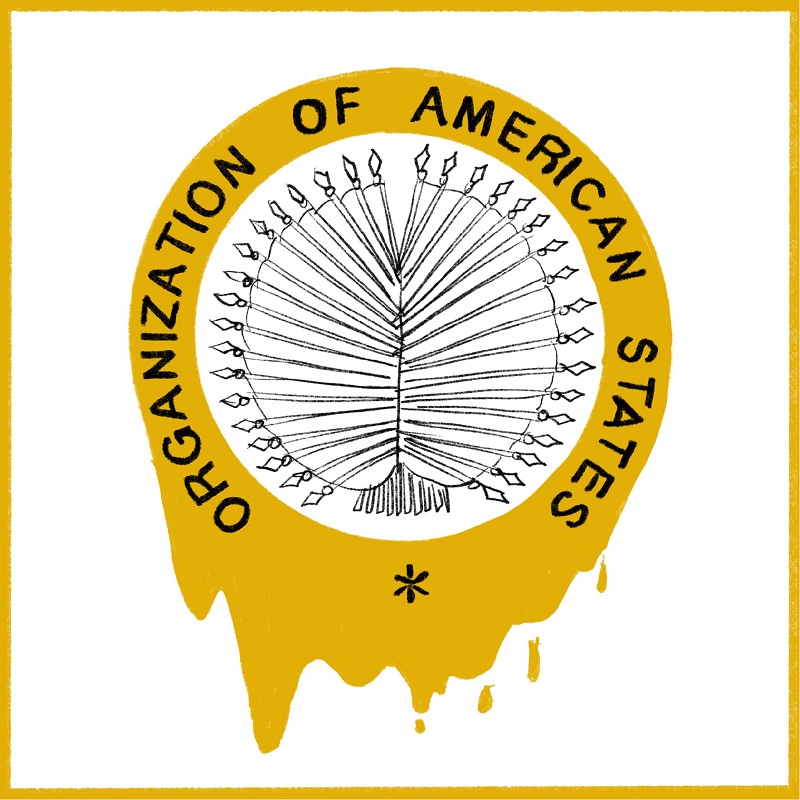 Guatemala City. 21 June (Monday). News comes into the capital city that twenty men of the invading force landed by boat at Puerto Barrios, Guatemala’s key port on the Caribbean Sea. Their invasion was bolstered by an attack by 150 armed men. Policemen and armed dock workers rounded up the amphibious force and chased out the armed men across the Honduran border to San Miguel Corredoros (Honduras). Guatemala’s Foreign Minister Guillermo Toreillo asked the UN Security Council to ‘take whatever steps are necessary’ to enforce the UN resolution. The Council is considering sending a fact-finding mission to Guatemala. The US has indicated that this mission should be made up of the Organization of American States (OAS) Peace Council. Former British minister Aneurin Bevan said that the ‘Guatemalan invasion is a plot to save American property’. 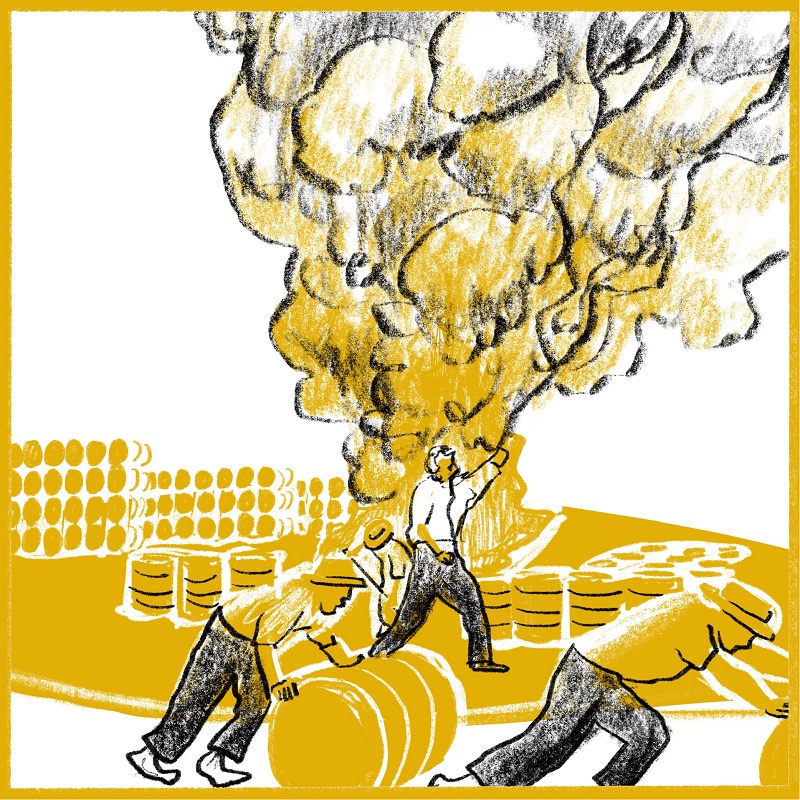 Guatemala City. 22 June (Tuesday). Mysterious aircraft bombed Guatemala City, striking an oil tank. No lasting damage has been reported. The oil tank fire was put out in twenty minutes. The advance of the forces of Castillo Armas have been largely blocked. President Jacob Árbenz remains defiant. The defeat of the invading force at Puerto Barrios and the UN Security Council resolution are positive signs for the government. The US State Department did not comment. 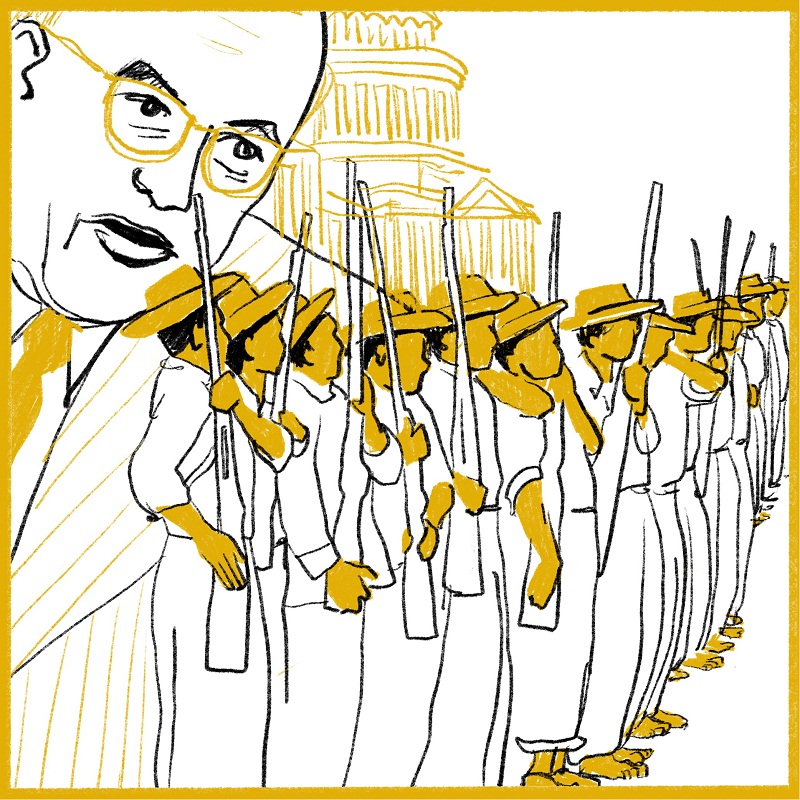 Guatemala City. 23 June (Wednesday). Reports come in from Esquipulas and Chiquimula (both in eastern Guatemala) of gunfire, particularly around the Army barracks. General Enrique Díaz de León said that he had been authorised by President Jacob Árbenz to deploy troops to block the invasion; Guatemalan Army forces have been moved by rail towards the border region. A Guatemalan Communist Party member visited Zacapa (north of Chiquimula) and informed this reporter that the officers were terrified of the invasion; he reported this to Árbenz, who sent his own envoy to the barracks, where he was told that these officers think that the United States will invade Guatemala to get rid of the Communists. Their message to Árbenz was to resign in order to prevent the invasion. 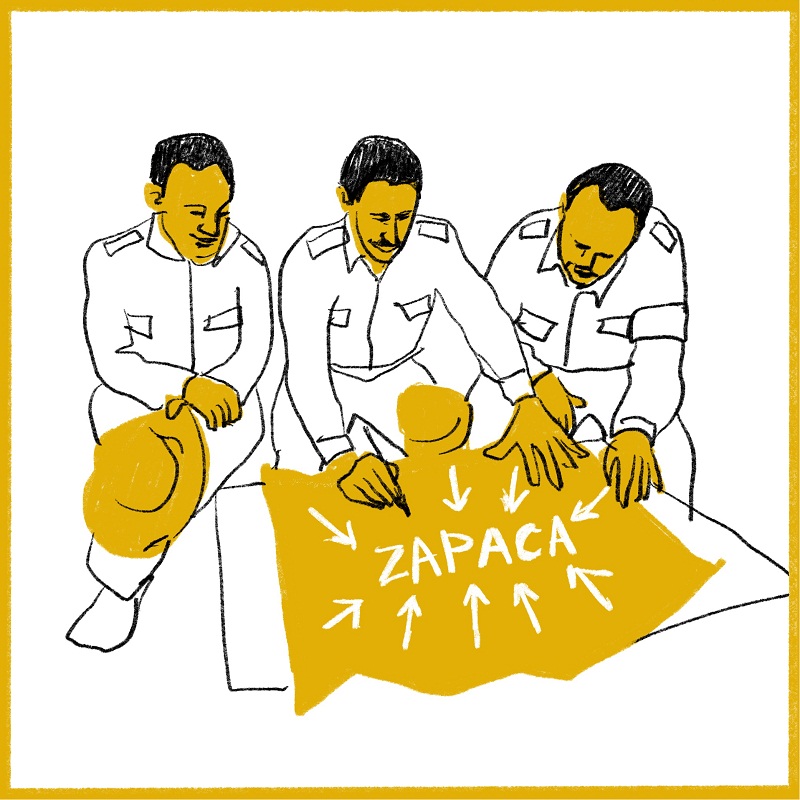 Guatemala City. 24 June (Thursday). All indications show that Zacapa will be the epicentre of the battle between the Guatemalan Army and the invading forces. The Army continues to advance to the city, although troop trains have been bombed by mysterious aircraft. These aircraft have also strafed columns of troops as they marched towards the demoralised garrison in Zacapa. General Enrique Díaz de León said that he is confident that the invading forces will not manage to seize Guatemala City. 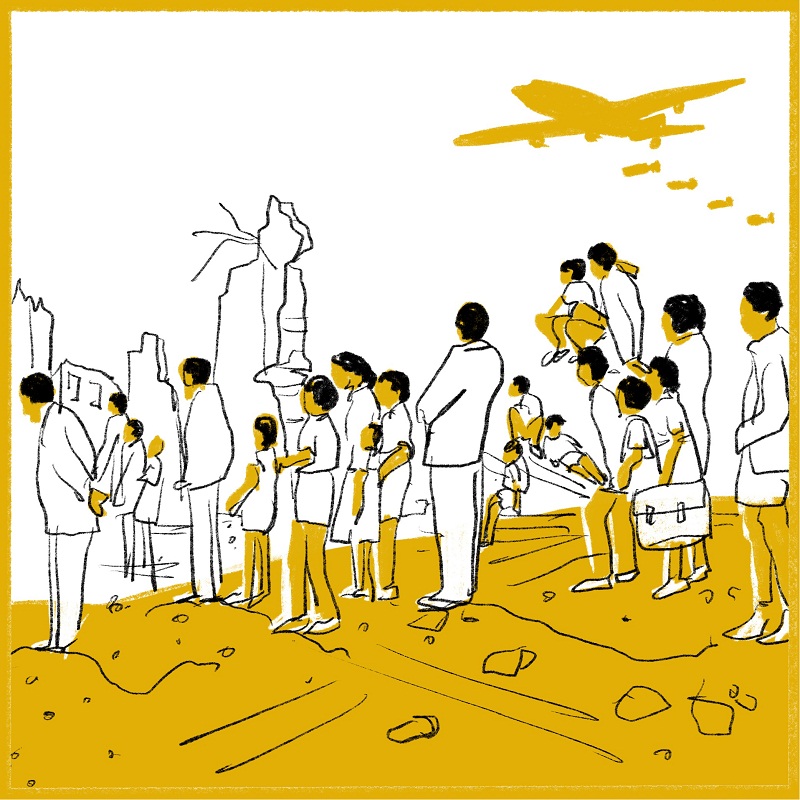 Guatemala City. 25 June (Friday). The bombings by the mysterious fighter aircraft have become more erratic and dangerous. An F-47 bomber struck the Matamoros Fortress, while another sunk a British freighter – Springfjord – in the port of San José. All indications showed that the Army had begun to turn against the government. President Jacob Árbenz summoned his cabinet, party officials, and union leaders to tell them to arm the population. Union leaders tell us that this order came too late and that their own ranks are not prepared to defend the government with arms. General Enrique Díaz de León and the union leaders agreed to cooperate, but reports indicate demoralisation as the Army seems to have joined the invading troops. 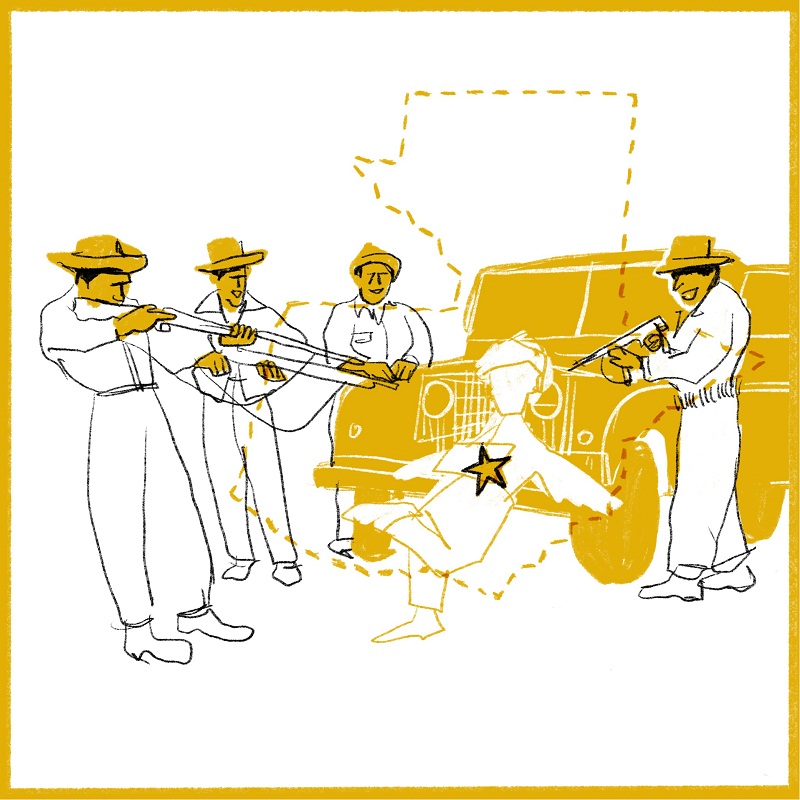 Guatemala City. 26 June (Saturday). In a difficult turn of events for President Jacob Árbenz of Guatemala, the head of his army General Enrique Díaz de León has defected to the opposition. The invading force has moved closer to Guatemala City and air strikes by the mysterious aircraft continue. Tension in the city is at a very high level. Shops are closed and people remain in their homes. The fall of the Árbenz government appears imminent. There has been no word from the United Nations. The US State Department remains silent. 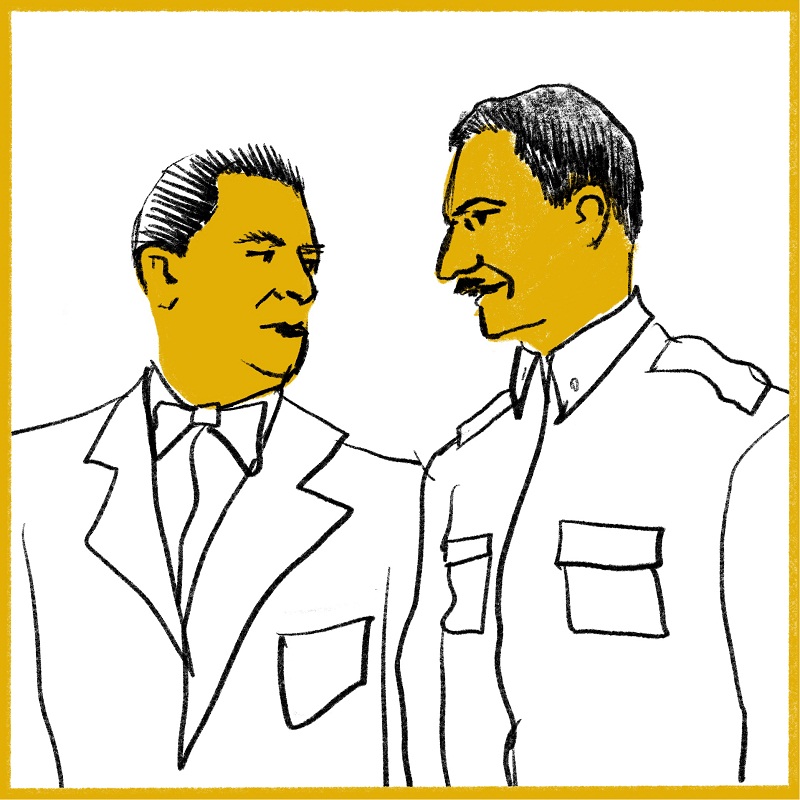 Guatemala City. 27 June (Sunday). Reports leak out that Army leaders have met with the US Ambassador John Peurifoy. Reports suggest that he has told them that the US government was entirely behind the overthrow of Árbenz. At 8 pm, Árbenz resigned. Those of us in the room heard his final speech, where he denounced the ‘fire and death’ being rained on his country by United Fruit and the ‘US ruling class’. The speech was broadcast on the radio, but not heard because all radio frequencies had been jammed. Árbenz handed over power to General Enrique Díaz de León, who took over in the name of the 1944 Revolution. The General said he would continue to fight against the invasion of Castillo Armas. Reports say that the US Embassy informed General Enrique Díaz de León that he would have to step down because of his failure to defer to Castillo Armas; the US Ambassador, sources say, told Washington, DC to bomb Guatemala City. ‘Bombs would persuade them fast’, he said of the Generals. 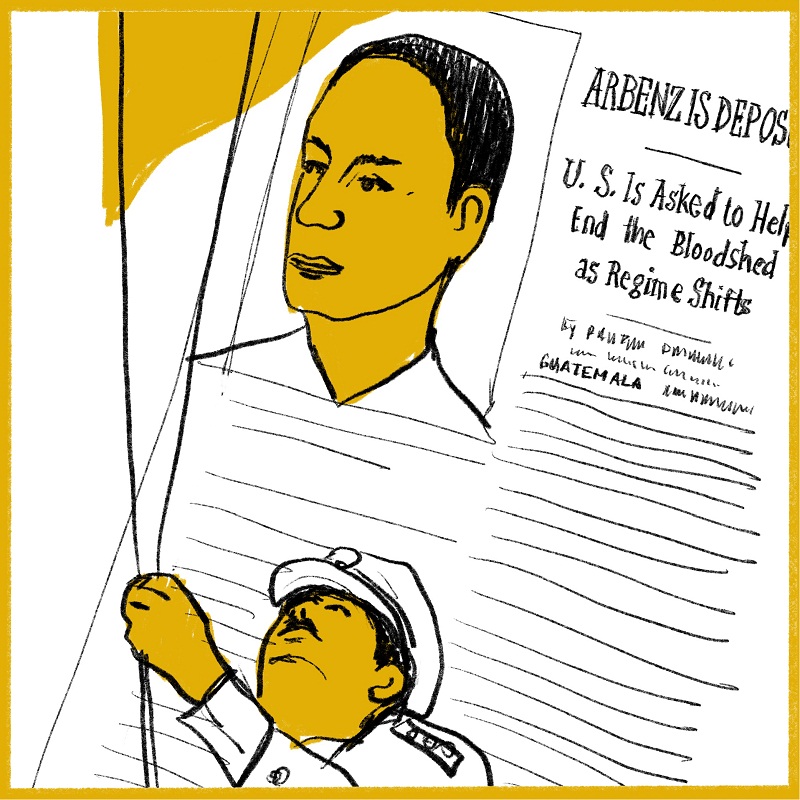 Mexico City. 28 June (Monday). General Enrique Díaz de León has resigned. Reports have already come in that Communists and anyone on the Left have been arrested. Árbenz is being held in prison. There is expectation that he would be sent into exile. Crates of champagne were seen being delivered to the headquarters of the United Fruit Company. Meanwhile, this reporter has had to flee from Guatemala City and is now sending in this final dispatch from Mexico City.