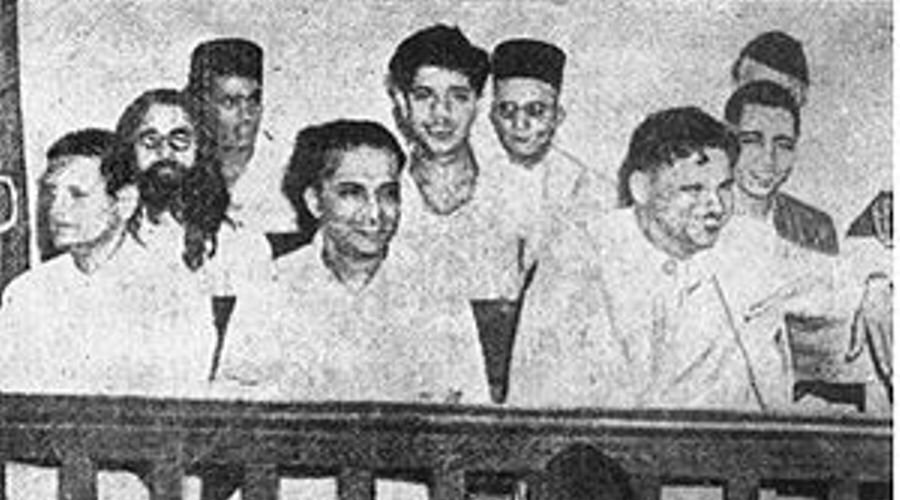 After years of prevarication, the Bhartiya Janta Party has at last publicly and explicitly owned up Vinayak Damodar Savarkar as its cult figure. The BJP seeks to displace Gandhi from his position as the pre-eminent symbol of Indian nationalism and project, in his stead, Savarkar as a national hero. This is an enterprise, however, that is fraught with risk. The risk of the truth coming out in the open.

In his book, Savarkar and Hindutva: The Godse Connection, A.G. Noorani builds a devastating case against Savarkar. This book investigates the figure of Savarkar, the author of the term ‘Hindutva’. What it finds does not add up to a flattering portrait. Savarkar rejected the inclusive, secular concept of territorial nationalism and advocated the exclusivist, communal concept of cultural nationalism. He was directly connected to more than one murder. And most damagingly, as the book demonstrates in great detail, it was Savarkar who led the conspiracy to assassinate Mahatma Gandhi on that fateful winter evening of 1948.

Read an extract from the book.

One is constrained to ask – is there any revolutionary in the history of any country whose record is as scarred as Savarkar’s? What drives the BJP to acclaim him as a hero is his authorship of Hindutva, the credo of communal hate. For this, all his other sins are overlooked. There is an aspect to the Gandhi murder case which has been commonly overlooked. Since the conspiracy originated in the erstwhile Bombay Province, it is the Bombay Police which conducted the investigation into its ramifications. But the Delhi Police came in because the dastardly murder was perpetrated in Delhi. There was perfect rapport between Morarji Desai, Home Minister of Bombay, and Vallabhbhai Patel, the Union Home Minister. In any case, there is no charge sheet in a case such as this unless Patel approved of it. His devotion to Gandhi was total. He was, besides, an outstandingly able criminal lawyer in his time. Savarkar could not have been cited as one of the accused unless Patel had approved of it. The record reflects creditably on Patel and as poorly on his ill-chosen cabinet colleague, Shyama Prasad Mookerjee, himself a former President of the Mahasabha, supporter of Savarkar, and subsequently founder of the Jan Sangh. . . .

As regards Savarkar, the Advocate-General of Bombay, who is in charge of the case, and other legal advisers and investigating officers met me at conference in Delhi before I came here. I told them, quite clearly, that the question of inclusion of Savarkar must be approached purely from a legal and judicial standpoint and political considerations should not be imported into the matter. My instructions were quite definite and beyond doubt and I am sure they will be acted upon. I have also told them that, if they come to the view that Savarkar should be included, the papers should be placed before me before action is taken. This is, of course, in so far as the question of guilt is concerned from the point of view of law and justice. Morally, it is possible that one’s conviction may be the other way about.

What else did Patel mean by that except that even if Savarkar’s guilt not be established before the court, ‘morally’ it was possible to hold him guilty of the crime? . . .

No one has alleged, to this day, that the RSS ‘as an organization’ was privy to Gandhi’s murder. That would imply direction at its highest level, by its chief or executive. What has been alleged – and was for long frantically denied – was that Godse was a member of the RSS. The cover was finally blown away by Gopal Godse at a press conference, in Pune on June 5, 1991, when he said that Nathuram was a volunteer of the RSS, but the RSS was not involved in the assassination.

Mookerjee wrote to Patel again on July 17, 1948, on ‘our policy towards RSS and Hindu Mahasabha’, pleading that neither was involved as an organization (‘as such’). He pleaded for ‘Hindu consolidation’ in spite of ‘political differences between party and party. . . . Hindus holding strong views on the need for saving India from passing under Muslim rule or other foreign rule should not be dubbed as fascist or conspirators.’ An entire section was devoted to ‘our attitude towards Muslims’ to allege that they were disloyal to India.

Patel replied the very next day on July 18:

As regards the RSS and the Hindu Mahasabha, the case relating to Gandhiji’s murder is sub judice and I should not like to say anything about the participation of the two organizations, but our reports do confirm that, as a result of the activities of these two bodies, particularly the former, an atmosphere was created in the country in which such a ghastly tragedy became possible. There is no doubt in my mind that the extreme section of the Hindu Mahasabha was involved in this conspiracy. The activities of the RSS constituted a clear threat to the existence of Government and the State. Our reports show that those activities, despite the ban, have not died down. Indeed, as time has marched on, the RSS circles are becoming more defiant and are indulging in their subversive activities in an increasing measure.

Which was this ‘extreme section of the Hindu Mahasabha involved in this conspiracy?’ Patel did not identify it explicitly. But he knew quite well who its leader was. It is unlikely that Mookerjee understood this to refer to Godse alone, not Savarkar. . . .

The question brooks no evasion. Why do the BJP and the RSS ignore the mass of material on Savarkar’s role in Gandhi’s murder and laud him as a hero? Would they have been as quiescent if the assassin had not been the author of Hindutva? Contrast this with their hyperactivity when the Jan Sangh’s President Deen Dayal Upadhyaya was found dead on February 11, 1968. He had left Lucknow for Patna the previous evening by Sealdah Express. His dead body was found lying near a traction pole 748 feet from the end of the platform of Mughalsarai station on which the train had halted at about 2.10 a.m. that day. The CBI said that the murder was committed by common thieves for small gain and was executed on the spur of the moment. The Jan Sangh attacked the CBI and set up a Committee, headed by Nana Deshmukh, to collect evidence. He filed his statement of the case and figured as one of the 51 witnesses examined by the Jan Sangh before a Commission of Inquiry. The CBI examined 23 witnesses. The Commission comprised Justice Y.V. Chandrachud of the Bombay High Court who became Chief Justice of India. His Report is a thorough exposure of the tactics to which the Sangh parivar readily stoops. The Sessions Judge Varanasi had on June 9, 1969, acquitted both the accused, two young men, Bharat Lal Dom and Ram Awadh, of the charge of murder. Bharat Lal was convicted of theft of Upadhya’s belongings and sentenced him to a term of four years. The Commission of Inquiry was set up on October 23, 1969.

The Jan Sangh cast its net wide with a malevolence that defies belief. It alleged that ‘Upadhyaya was murdered for political reasons’ and accused ‘certain Muslim organizations’ as well as ‘some Communists’ of complicity in the crime. They were alleged to have taken ‘the help’ of one Major S.M. Sharma. He was the son-in-law of one V.N. Sharma ‘who in turn is said to be closely connected with Dr. Abdul Jalil Faridi, the President of the Majlis Mushawarat.’ A host of others were dragged in. The CBI was alleged to have ‘manipulated’ the discovery of Upadhyaya’s articles and ‘concocted evidence.’

Justice Chandrachud’s Report, dated October 20, 1970, did more than find these charges to be totally groundless: ‘I can say with a certain amount of confidence that nothing that has come before me can support the accusation that there was any politics in Shri Upadhyaya’s murder.’ It was the rash and ‘extempore handiwork of mere thieves’. That, however, was not all. A diary written by Ramacharya Pandey, a Jan Sangh member and editor of a weekly, was found to be a total fabrication ‘for the purpose of producing it as evidence.’ . . .

The Sangh parivar manages somehow to live down such behaviour. But how does a figure like Savarkar inspire people to raise statues in his memory and name roads after him? Contrast this with the treatment meted out to those nationalists who were Muslims and who sacrificed no less than their Hindu comrades for their participation in the freedom movement.

Nehru said this as a reproach to Hindu communalists masquerading as Indian nationalists. Savarkar proved him right in his own perverse manner. Addressing a students’ gathering at Kanpur, Savarkar said,

What is called Nationalism can be defined as in fact the National communalism of the majority community which has been ruling and still aspires to rule this country. Thus, in Hindusthan it is the Hindus, professing Hindu religion and being in overwhelming majority, that constitute the National community and create and formulate the Nationalism of the Nation. It is so in every country of the world. . . . The minorities, while maintaining their separate religions and civilizations cooperate with the majority communities and merge themselves in the common life and administration of these countries.

No wonder the Sangh parivar hates Nehru’s memory. But it retains a soft corner for Morarji Desai. It would therefore be fitting to remind them of Desai’s carefully-worded judgment on Savarkar in the Bombay Legislative Council on April 3, 1948, when R.N. Mandlik referred to ‘the past services of the Savarkar brothers’. Morarji Desai’s reply was devastatingly brief: ‘May I say, Sir, that the past services are more than offset by the present disservice?’