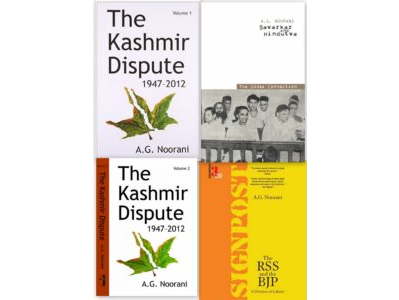 We, at LeftWord Books, have been proud to publish the thoroughly-researched and laser-sharp writings of AG Noorani. Born in 1930, Noorani is a renowned advocate in the Bombay High Court and in the Supreme Court of India. It is that lawyer’s eye that Noorani brings to his historical and political studies, careful to map out the dynamics of human events but also to judge them based on a moral standard that oscillates between the barometer of common sense and the liberal constitutional tradition.

In the current issue of Frontline, where Noorani has written for the magazine’s lifetime, he writes a sharp assessment of Prime Minister Narendra Modi. It opens where it ends – with merciless, and well-earned, scorn for the tenure of Modi,

Just half-way through his term in office as Prime Minister, Narendra Modi faces disenchantment to a high degree. Demonetisation only served to remind the people of lapses they had overlooked. He hugely personalized demonetisation. The gamble failed. The slide downwards has begun. The Emperor has no clothes on him.

Disenchantment with the Prime Minister is general across the land. People have been angered deeply with the games played with their savings. Talk of ‘black money’ and ‘corruption’ says little to the ordinary person whose access to basic needs have been compromised by the demonetization scheme. Noorani mirrors this sensibility – which lies somewhere between annoyance and rage.

Modi did not shed a tear after the Gujarat pogrom of 2002, Noorani writes, but now – in the face of criticism – he becomes, as Noorani puts it, a ‘Sawdust Caesar’. Modi begs indulgence, begs forgiveness, begs to be protected from unknown forces that are arrayed against him. He is Modi to himself. ‘Do you think Modi will just come and go like other political parties?’, he asks his audience. Modi has become a political party. He is no longer merely the leader of the BJP, the epitome of Hindutva.

Noorani is best positioned to make this kind of assessment. He has closely studied the record of Hindutva’s political agencies, the RSS and the BJP. His first book for LeftWord – The RSS and the BJP: A Division of Labour – was published in 2000 and will soon be reissued. This was a classic account of the shrewd way that the RSS – widely reviled for its fascistic outlook and behavior – hid in the shadows as its puppet political party the BJP became the public face. This was a time when the BJP-led alliance was in power, with Atal Bihari Vajpayee positioning himself as the moderate leader. There was neither anything moderate about Vajpayee nor should there have been any illusions about the role of the RSS inside the Vajpayee cabinet. Both Sarsanghchalaks – Rajendra Singh and K. S. Sudarshan – danced their marionettes – L. K. Advani, Murli Manohar Joshi – when necessary. ‘The Sangh is my soul’, Vajpayee had said. ‘Vajpayee is an authentic product of the RSS’, Noorani wrote in The RSS and the BJP, ‘and shares its outlook’. He might have been a more articulate person and perhaps even a more sympathetic person than Advani, but he was no less committed, as Noorani put it, ‘to the shared goal’ of the RSS and the BJP. This was for a Hindu-dominated State, with the Sangh Parivar in touch of the institutions.

Unraveling the connections between the disparate and illiberal organizations of the Sangh Parivar has been one of Noorani’s great contributions. In his Savarkar and Hindutva: the Godse Connection (2002), Noorani demonstrated the link between the murderer of Gandhi – Nathuram Godse – and the Hindutva movement. Here Noorani shows how the lineage of the Hindu Right – from Savarkar and the RSS onwards – has been one of conciliation towards imperialism. Hatred of Muslims was an obsession, with freedom from British rule set aside. Savarkar met with Lord Linlithgow, Viceroy of India, in 1939 to pledge the cooperation of his movement, as long as the British – with Savarkar’s help – would suffocate the Congress movement. This was the calculus of the Hindu Right – absent from the national movement, as the historian Irfan Habib recently reminded us, but present in the attempt to join the British imperialist to destroy the Congress, which at that time was a wide platform for the national upsurge for freedom. It was this hatred of the Congress and Gandhi that drove those Hindu Mahasabha members – Godse, Narayan Apte, Vishnu Karkare, Madanlal Pahwa, Gopal Godse, Dattatraya Parchure and Savarkar – to plot and carry out the assassination of Gandhi. Savarkar, the guru of Hindutva, was acquitted because Judge Atma Charan felt it ‘unsafe’ to convict him.

For LeftWord, Noorani produced a fine book of impeccable scholarship – Islam and Jihad (2002) – which undermined the grave stereotypes of a belligerent Islam. What Noorani does is to carefully, with a lawyer’s eye, parse through the record for evidence of the different kinds of jihad – the lesser and the greater – and the meanings of the term over the course of the century. The impetus for this book was the 9/11 terrorist attack. Noorani felt the need to set the record straight that such terrorism is quite remote from jihad, indeed is its opposite. Those who do not first conduct the greater jihad – to fight one’s ‘animal tendencies’, as Yusuf Ibish put it – are not qualified for the lesser jihad – acts of self-defence, fights for justice. ‘It is true’, Noorani writes, ‘that Muslims have waged wars; wars of conquest, wars in the ordinary sense, often not at all related to religion or faith. But this indicates that some Muslims have not exercised the Greater Jihad’. It is this test that sets the 9/11 attackers outside the bounds of justifying their acts by the language of jihad.

This immense body of work and the judgment accruing from his assessment of historic figures across time gives Noorani’s pen the confidence to write these scathing remarks about Modi, which end his Frontline essay:

Modi is not a strong leader. He is an incompetent one whom failures drove to dwell in a bubble. On December 27 he claimed: ‘Through the note ban, in one stroke, we destroyed the world of terrorism, drug mafia, human trafficking and underworld’ (The Hindu, December 28). Don’t laugh; be prepared for worse. A paranoid who can speak thus can do much worse as desperation and failures mount. He cannot accept reverses and defeats. A grave misfortune has befallen the country. With Narendra Modi, the office of Prime Minister of India has fallen to its lowest depths.