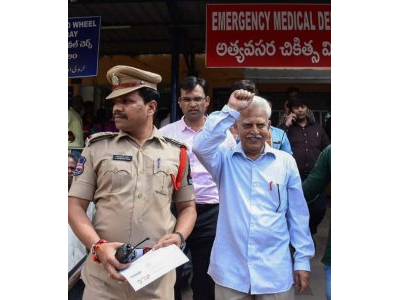 On Tuesday morning, the police from the Indian city of Pune (in the state of Maharashtra) raided the homes of lawyers and social activists across India and arrested five of them. Many of them are not household names around the world, since they are people who work silently on behalf of the poor and oppressed in a country where half the population does not eat sufficiently. Their names are Gautam Navlakha, Sudha Bharadwaj, Vernon Gonsalves, Arun Ferreira and Varavara Rao. What unites these people is their commitment to the working class and peasantry, to those who are treated as marginal to India’s state. They are also united by their opposition, which they share with millions of Indians, to the government of Prime Minister Narendra Modi.

Gautam Navlakha, a writer, was brought before the Delhi High Court. One of the two High Court judges—S. Muralidhar—was puzzled by the documents produced by the Pune Police. Some were in Marathi, which the judge could not read, while others seemed indecipherable. “It is not possible to make out a case from the documents placed before us,” he said. “What is the specific allegation against him?” the judge asked. The police remained silent. The others are to be moved to Pune. Their fate is uncertain.

I heard the news in Buenos Aires, Argentina, where I was—coincidentally—reading carefully the 1977 letter written by the writer and militant Rodolfo Walsh. Walsh’s Operation Massacre (1957) inaugurates a genre of writing now called “narrative non-fiction.” He went to Cuba in the early years of the revolution and cracked the CIA code that warned the revolutionary Cuban government about the Bay of Pigs invasion. Returning to Argentina, Walsh became part of an organization—Montoneros—that fought against the drift of his country into the arms of the ruthless military dictatorship that began in 1976. On the first anniversary of the dictatorship, Walsh mailed several copies of his letter—an open letter—that detailed the “raw numbers of this terror,” the arrests and detentions, the vanished militants of the trade union and student movement, the gasping for air of his society. “You have arrived at a form of absolute, metaphysical torture, unbounded by time,” wrote Walsh in the letter that sealed his fate. He was arrested and vanished—his body burned and thrown into a river in Buenos Aires.

What befell Rodolfo Walsh is the fate of too many today—in plain sight.

The “raw numbers of this terror” are best counted from Turkey. Since the failed coup of July 15, 2016, the government has arrested, detained or dismissed about 160,000 government officials, dismissing 12,000 Kurdish teachers, destroying the livelihood of thousands of people. The editor of Cumhuriyet, Can Dündar, called this the “biggest witch-hunt in Turkey’s history.” In the name of the war on terror and in the name of sedition, the government has arrested and intimidated its political opponents. The normality of this is astounding—leaders of the opposition HDP party remain in prison on the flimsiest of charges, with little international condemnation. They suffer a fate comparable to Brazil’s Lula, also incarcerated with no evidence.

Governments do not typically like dissent. In Bangladesh, the photographer Shahidul Alam remains in detention for his views on the massive protests in Dhaka for traffic reform and against government corruption. Condemnation of the arrest has come from all quarters, including a British Member of Parliament—Tulip Siddiq—who is the niece of Bangladesh’s Prime Minister Sheikh Hasina. The avalanche of criticism has not moved the government. Alam is accused of inciting violence, a charge that is equal parts of ridiculous and absurd.

Incitement to violence is a common charge. It is what has taken the Palestinian poet Dareen Tatour to an Israeli prison. Tatour’s poem, “Resist, my people, resist them” (Qawim ya sha’abi, qawimhum), was the reason given by the Israeli government to lock her up. The Egyptian government has taken in the poet Galal El-Behairy for the lyrics he wrote for the song “Balaha”—the name a reference to a character in a 1980s film who sees the world in a topsy-turvy manner, a name now used colloquially in Egypt for President Sisi. The Ugandan government has arrested the radio show host Samuel Kyambadde, who merely allowed his talk show to become a forum for a conversation that included items labeled by the government as seditious—such as the arrest of journalists and the arrest of the opposition MP Robert Kyagulanyi (also known as Bobi Wine).

All of them—photographers, poets, radio show hosts—are treated as voices of sedition, dangerous people who can be locked up under regulations that would make any fair-minded person wince. But there is not even any public debate in most of our societies about such measures, no genuine discussion about the slide into the worst kind of authoritarianism, little public outcry.

Pain shudders through the arteries of Indian society. The rule of the current government has hardened society, allowed people of ferocious hatred to walk the streets and deliver the justice that they think is appropriate. These vigilantes believe that they can kill anyone who they think threatens cows or that they can kill anyone they dislike (Muslims, oppressed castes, leftists). These are assassinations of ordinary people—people whose names are flashed across the screen for a day or so and then forgotten as other names of other people who have been murdered arrive. Some of them are killed for their social background, others for their political commitments.

Four writers and activists—Gauri Lankesh, M.M. Kalburgi, Govind Pansare and Narendra Dabholkar—had been killed in sequence. The police have now begun to unravel the plot—tracing weapons to the sewers of the Hindu Right. It is almost as if these current arrests come to distract attention from those who actually created a criminal conspiracy to assassinate Lankesh, Kalburgi, Pansare and Dabholkar (a point made in a statement released by Indian writers). It is a cliché of the right wing to divert attention from real problems toward manufactured crises. There are real problems here—a right-wing conspiracy to kill dissenters, a collapsed Indian rupee, no hope of economic recovery. The economic slide cannot be stopped by a knife in the gut of a left-wing activist or a nuclear test or another trip overseas by the itinerant prime minister. What can derail the conversation is for every household in India with a television set to be transfixed on what appears to be a totally fallacious series of arrests.

There is more advice from Rodolfo Walsh. He writes in his letter that even if the military junta in Argentina kills the last guerrilla, that would not end matters. The many currents of resistance will not vanish. Instead, Walsh writes with great feeling, the survivors will be “aggravated by the memory of the havoc that has been wreaked and by the revelation of the atrocities that have been committed.” This hope is not for India alone. It is for Bangladesh, for Uganda, for Turkey… for our planet, really. One hopes that the survivors, those whose hearts remain beating on the hopeful sides of their chests, will not stand by silently as the last people of feeling are arrested and murdered.

This article was produced by Globetrotter, a project of the Independent Media Institute.