A review of Acting Up: Gender and Theatre in India, 1979 Onwards 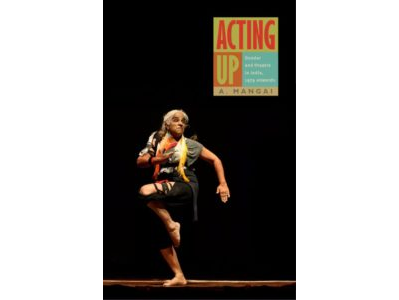 Acting Up: Gender and Theatre in India, 1979 Onwards, by A. Mangai, a book which examines the work of major women theatre practitioners in India since 1979 to explore the intersection of gender and theatre. Niharika Malimadugula has written about the book for The Wire. She writes, "Despite being a largely scholarly endeavor, there’s a sensitivity of description and a personal involvement from Mangai, both as a teller and participant in the world of theatre, that makes the book relatable and provoking. Women came to theatre inspired by so many different things – politics, literature, language, traditional theatre and enriched it in their own unique ways. They reconstituted theatre, as much as theatre offered them, and this book along with its writer is an example of that reciprocation."  Sruthi Krishnan had called the book self-reflexive and remarkable as it managed to include the readers in a circular relationship, thus making the book a site of dialogue, in her review for The Hindu.

Indian drama is often represented as being primarily a male-dominated endeavor, and the contributions of women and other genders remain relatively underresearched. A. Mangai’s Acting Up, a study focused on women theatre practitioners in India over the last three decades, is, therefore a critical intervention. While the work is primarily about theatre by women and about women, it positions itself at “the intersection of gender and theatre”  and extends to various sexual minorities, including hijras (transsexuals), transgenders, lesbians, bisexuals, and sex workers. The book thus decenters the masculine focus of Indian theatre historiography by widening its scope. It unfolds as a series of case studies of individual practitioners and groups, organized thematically into chapters. The introductory section, “Staging Gender,” traces the co-evolution of street theatre and the feminist movement in India during the period of state-imposed Emergency in the 1970s, examining the work of prominent theatre activists such as Jyoti Mhapsekar, Moloyashree Hashmi, Aditi Desai, Tripurari Sharma, and Malini Bhattacharya.

Mythology, folklore, and history provide fertile sites for feminist intervention through theatre. Mangai analyzes several revisionist experiments that focus on the experience and contribution of women within these narratives. Some plays, such as Saoli Mitra’s Nathabat Anathbad (Five Lords, Yet None a Protector, 1983) and B. Jayashree’s Chitrapata Ramayana (Portrait Ramayana, 1999), reinterpret the epic tales of the Mahabharata and Ramayana, respectively, from the perspective of the female protagonists; some, like Anuradha Kapur’s Umrao (1993), a story about the fabled nineteenth-century courtesan, Umrao Jaan, present fictionalized versions of historical events; and others, like Kirti Jain’s Aur Kitne Tukde (How Many More Pieces? 2000), which dramatizes the lives of women during the violent partition of India and Pakistan in 1947, give voice to perspectives that remain unheard within official historical narratives.

Mangai’s analysis is theoretically grounded in Judith Butler’s premise that both theatre and gender are inherently performative and “when ‘done’ are essentially rooted in experience” (p. 1). This privileging of experience is the conceptual anchor of the book, reflected in the content and methodology of the work. The idea of “performing gender” is literalized in the dramatic convention of female impersonation; in a chapter devoted to the subject, Mangai explores its various manifestations, ranging from the nineteenth-century practice of routinely casting men in feminine roles to the conscious decision by director Amal Allana to cast a man as Mother Courage in her adaptation of the Brecht play.

Acting Up interrogates empowerment through theatre from the perspective of the artists and occasionally from the viewpoint of the spectators. Unlike several other surveys of Indian theatre, Mangai’s analysis focuses on productions rather than (written) texts and engages holistically with the aesthetics of performance: from artwork, design, publicity, and merchandise to the process of theatre-making, such as the auditions and workshops that precede the performance and the reception and documentation that follow it. A strong first-person voice animates the book, lending an intimate tone. For instance, she notes that “many of the people named and referred to in this study are people known to me, my friends and fellow travellers, and it seems strange to me to refer to them by their last names as demanded in academic research” (p. 35) and thus she opts to use full names. This minor choice encapsulates the spirit of the study, which supplements factual details and critical insight with information culled from the author’s own knowledge of and conversations with the artists. She also extensively discusses her own theatre-making process over the last thirty years.

Unlike many other surveys of Indian drama published in recent years, Mangai’s study does not problematize the categories of the “national” or the “modern” as a departure point. While this allows her to go beyond the canonized coterie of modern Indian (male) theatre personalities that are normally discussed, the field of women’s theatre she analyzes sometimes seems divorced from other kinds of dramatic experimentation in India.

Although Acting Up provides a panoramic view of women’s theatre practice in India, its engagement across the various case studies occasionally appears to be inconsistent. For instance, Maya Krishna Rao, one of the leading women practitioners in India since the 1980s, has barely one page dedicated to her highly original and provocative practice, even though her photo appears on the front cover! Photographs and an appendix of performers and productions discussed would have been useful additions to the book.

Although Acting Up provides a panoramic view of women’s theatre practice in India, its engagement across the various case studies occasionally appears to be inconsistent.

Acting Up fills a critical lacuna within the field of theatre scholarship on India; in its methodology and tone, it skillfully conveys the state and spirit of contemporary dramaturgical practice, and effectively captures the “pleasures and perils” of doing theatre in India.