75 Years of the Historic Warli Revolt 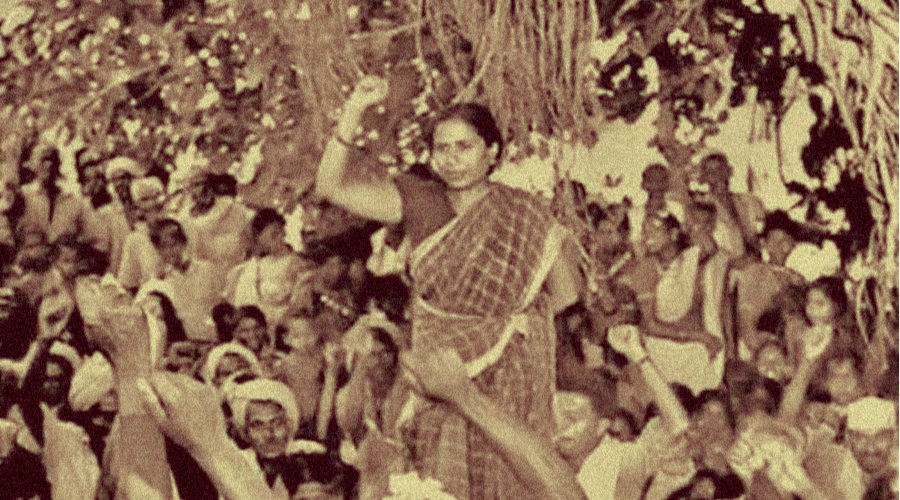 [From Ashok Dhawale’s Facebook wall] Exactly 75 years ago, on May 23, 1945, a large convention was held by the Communist Party and the All India Kisan Sabha (AIKS) at Zari village in the then Umbargaon (now Talasari) tehsil of Thane district in Maharashtra. Over 5,000 Adivasi women and men from Talasari and Dahanu tehsils gathered there.

They were addressed by AIKS leaders Shamrao Parulekar and Godavari Parulekar, who gave a clarion call to overthrow the hated feudal system of bonded labour and marriage slavery that was rampant in the district for the last one century and more. Thus began the historic Warli Adivasi Revolt in Thane district.

The extract below, taken from Archana Prasad’s Red Flag of the Warlis: History of an Ongoing Struggle (LeftWord, 2017), gives an idea of why the Communist Party of India (Marxist) has won 9 out of 10 assembly elections for the ST constituency in Dahanu and has held the Talasari Panchayat Samiti for the last 58 years.

The period from the mid-1940s to the early 1950s has been often described as one of the ‘golden periods’ of the Communist movement. This period was characterized by some of the most famous peasant struggles in contemporary India. These struggles, namely Telangana, Tebhaga, Punnapra Vayalar, Gana Mukti Parishad, Surma Valley and the Warli Adivasi revolt, laid the foundation for the ideological dominance and physical expansion of the influence of the Communist Party.

These struggles were led by the local units of the All India Kisan Sabha that mobilized peasants and workers for their socio-economic and political rights. They were also linked to a project of social and political transformation that dreamt of an oppression-free egalitarian society. The movements that followed resulted in certain basic organizational structures which form the foundation of the current interventions of the Kisan Sabha.

The early history of Thane district shows that prior to the arrival of the British, the Portuguese, Mughals and Marathas ruled over the district through with multiple land revenue structures. The unevenness of the land revenue structures was a result of these successive rulers with their own land tax systems. Broadly speaking, the area was divided into two regions: the coastal area with Kunbi and farmers, and the hilly regions with Warlis and other Adivasis.

The Kisan Sabha’s first struggle in the region began with the farmers on the coastal belt in Kalyan in 1944. At that time there was no Kisan Sabha in Maharashtra. As Comrade L.B. Dhangar recalls, Shamrao Parulekar was working for the Communist Party at Mumbai. Inspired by the farmer-led revolution in China, he asked the Party to give him permission to go and work amongst the farmers. The Parulekars decided that they would go to Thane, Murbad, Bhiwandi, Kalyan and Shahapur talukas and would start work with farmers.

After this Godavari and Shamrao Parulekar shifted to Kalyan, and the first farmers’ struggle leading to the formation of the Maharashtra Rajya Kisan Sabha was organized in 1944 against the wrong weighing system by merchants in the agricultural produce market. The memory of this struggle is very sparse, with only Comrade Dhangar recalling that small and marginal farmers from the Kunbi and agricultural communities brought their produce to the weekly market at Kalyan. But these farmers were cheated because their produce was not weighed properly by the traders. In this situation the farmers first asked Shamrao and Godavari Parulekar to help them out. A struggle began under the leadership of the Parulekars in which 500 farmers marched under the Red Flag and confiscated the faulty weights and measures, thus stopping the business of the market. The struggle resulted in victory. This increased the faith of the farmers in the Red Flag and they organized themselves into the Kisan Sabha.

The formation of the Kisan Sabha in Thane district also took place around the same period. Soon after the farmers’ struggle, the first conference of the Maharashtra Rajya Kisan Sabha was held at Titwala near Kalyan on January 7, 1945. The preparations for it had started at the end of 1944. Shamrao Parulekar then visited the Adivasi areas in the north of the district for the first time and persuaded the Warlis to send some representatives for the Conference. Mahya Dhangda from Zari village of Talasari taluka was among those who represented the Warlis and narrated the experiences of inhuman torture by the landlords. These experiences opened the eyes of the Kisan Sabha leadership to the slavery and bonded labour that prevailed in the Dahanu and Talasari talukas. A resolution was passed in the Kisan Sabha State Conference for the abolition of slavery and bonded labour. This was the first step towards the organization of the Warlis under the Red Flag.

The Red Flag gave the Warlis the courage to rise against the exploitation of the landlords and organize themselves. After a preparatory meeting at Talasari, the historic meeting of May 23, 1945, took place under five banyan trees in Zari village of Talasari taluka (then part of Umbergaon taluka). As Dhangar recalls, around 5,000 Warlis from Dahanu and Talasari talukas attended the meeting which was addressed by Godavari and Shamrao Parulekar. They passed a resolution declaring the abolition of slavery and bonded labour under the leadership of the Red Flag. The landlords also sent their representatives, but seeing the unity of the Warlis under Red Flag leadership, they ran away. Dhangar explains that through this the Warlis realized that they would have to stay united and organized if they are to confront the landlords.

Both the meetings at Titwala and Zari are important parts of the collective memory of old Warli comrades. For example Ladak Diwal Beej from Talasari recalled that he attended the conference at Titwala and the first meeting at Zari. Ratni Ramji Satvi (Zari, Talasari) recalls that she was very young when the meeting in Zari took place. She recalls that the Comradin (Godutai) told her to go ahead and gather people. One of the oldest living comrades, Shivram Dharma Dabhade (Aundhani, Palghar), recalls that his father and uncle had gone to Titwala and brought the Red Flag to the village. A similar story is told by Jayesh Valvi (Udhwa, Talasari) who says that his grandfather went for the conference at Titwala. Some other people also went with him after leaving the work of the sahukar. ‘The time was such that they had to bring the Red Flag by hiding it’.

These interviews show that almost every household has some familial connection with the first struggle that established the Red Flag in the region. The history below recounts some of the main aspects of this foundational movement: the movement against vethbigar (forced labour), the Talwada firing, the grass cutting movement and the lagnagadi (marriage slaves) emancipation movement. These struggles formed a part of the larger Warli revolt and are etched in the collective memory of the region.