van Illich was born in Vienna in 1926. He studied theology and philosophy at the Gregorian University in Rome and obtained a PhD in history at the University of Salzburg. He came to the United States in 1951, where he served as assistant pastor in an Irish-Puerto Rican parish in New York. From 1956 to 1960 he was assigned as vice rector to the Catholic University of Puerto Rico, where he organized an intensive training center for American preists in Latin American culture. Illich was a co-founder of the widely known and controversial Center for Intercultural Documentation (CIDOC) in Cuernavaca, Mexico, and since 1964 he has directed research seminars on "Institutional Alternatives in a Technological Society," with special focus on Latin America. Ivan Illich's writings have appeared in The New York Review, The Saturday Review, Esprit, Kuvsbuch, Siempre, America, Commonweal, Epreuves, and Tern PS Modernes. 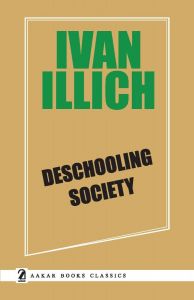 INR 495
Universal education through schooling is not feasible. It would be no more feasible if it were attempted by means of alternative institutions built on the style of present schools. Neither new attitud...
OTHER AUTHORS MARGIT KOVES currently teaches Hungarian at the Department of Slavonic and Finno-Ugrian Studies, University of Delhi. She has been a Fellow of the ICHR, ICSSR and ICPR and has published several art