Whole Numbers and Half Truths

What Data Can and Cannot Tell Us About Modern India

How do you see India? Fuelled by a surge of migration to cities, the countryʼs growth appears to be defined by urbanisation and by its growing, prosperous middle class. It is also defined by its progressive and liberal young, who vote beyond the constraints of identity, and paradoxically, by an unchecked population explosion and rising crimes against women. Is it, though?
In 2020, the annual population growth was down to under 1 per cent. Only thirty-one of hundred Indians live in a city today and just 5 per cent live outside the city of their birth. As recently as 2016, only 4 per cent of young, married respondents in a survey said they had a spouse belonging to a different caste group. Over 45 per cent of voters said in a pre- 2014 election survey that it was important to them that a candidate of their own caste wins elections in their constituency. A large share of reported sexual assaults across India are actually consensual relationships criminalised by parents. And surprisingly, spending more than Rs 8,500 a month puts you in the top 5 per cent of urban India.

In Whole Numbers and Half Truths, data-journalism pioneer Rukmini S draws on nearly two decades of on-ground reporting experience to piece together a picture that looks nothing like the one you might expect. There is a mountain of data available on India, but it remains opaque, hard to access and harder yet to read, and it does not inform public conversation. Rukmini marshals this information—some of it never before reported—alongside probing interviews with experts and ordinary citizens, to see what the numbers can tell us about India. As she interrogates how data works, and how the push and pull of social and political forces affect it, she creates a toolkit for data, a blueprint to understand the changes of the last few
years and the ones to come.

This is a timely and wholly original intervention in the conversation on data, and with it, India.

Rukmini S. is an independent data journalist based in Chennai. In 2004, she began covering Mumbai city for The Times of India. Since 2010, she has specialised in data journalism. She was the first Data Editor of an Indian newsroom, first at The Hindu and then at HuffPost India. She has also reported on the field from across the country.

She now writes for a range of publications including Mint, IndiaSpend and The Guardian. Her pandemic podcast, The Moving Curve, won an Emergent Ventures India Covid-19 Prize in 2020. She was awarded the Chameli Devi Jain Awards for an Outstanding Woman Journalist (Honourable Mention) in 2020 and a Likho Award for Excellence in Media in 2019. Born in Pune, she studied in Mumbai and London and has a Post-Graduate Diploma in Social Communications Media
and an MSc in Development Studies. 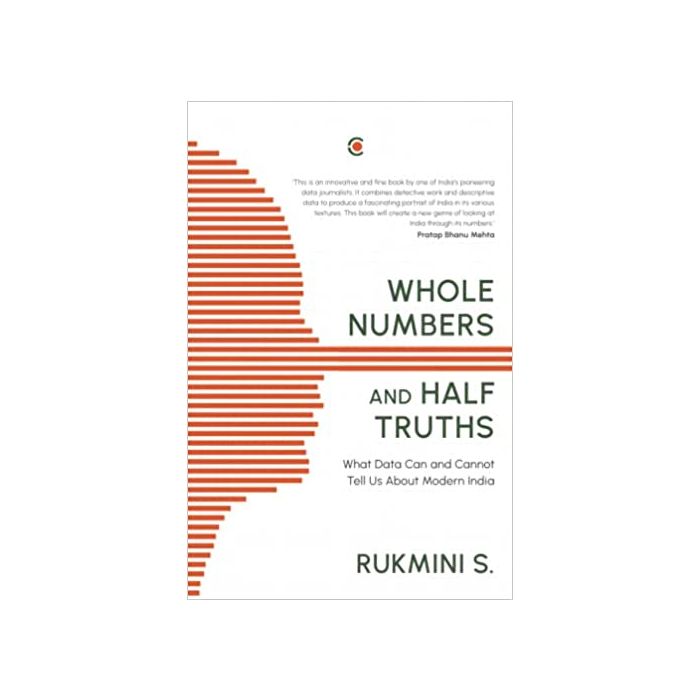