We Are Najeeb: Identity Politics and the Left 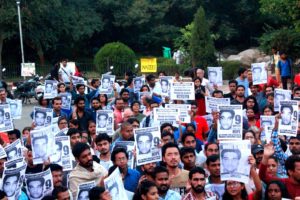 Najeeb Ahmed, a student at the Jawaharlal Nehru University (JNU), was brutally attacked by a group of student activists from the Akhil-Bharatiya Vidyarthi Parishad (ABVP), the student wing of the forces of Hindu Rashtra. This attack took place at Najeeb’s hostel – Mahi-Mandavi. Najeeb, then, vanished. He has not been see since.

Protests by students and others – including Najeeb’s family – have been violently set upon by the Delhi police. The police force seems keener to shut down protests than to find Najeeb. How do we understand the issue of the attack on Najeeb and his disappearance? Should we see this as an attack on a student in general or a Muslim student in particular? What should be the attitude of the Left towards the so-called Muslim Question as far as this crime is concerned?

The Sangh brigade might very well have targeted Najeeb because he is a Muslim. Since the case has been so abysmally investigated, one cannot be certain about the basic facts of the attack and disappearance. A proper and unbiased inquiry would show us why Najeeb faced the wrath of the ABVP.

No doubt, however, that the ABVP has used the attack and the disappearance in a communal manner. They have written slogans that are very inflammatory on the hostel wall, slogans such as Muslims are Terrorists. The kind of communally charged hate comments they made in front of the Warden establishes the communal mind-set of the ABVP. They claim – through rumours on-line and off-line – that Najeeb got agitated when he saw that the ABVP members wore threads on their arms. The ABVP suggests that the JNU Students’ Union (JNUSU) involved itself in the campaign in order to appease the Muslim community to gain votes in the next election. That the ABVP was trounced in the recent election shows its frustration and its attempt to drive a communal wedge into the campus social life. The ABVP – under a different name – took out a march on campus to declare its full solidarity with those who assaulted Najeeb. It is important for the ABVP to continue to highlight the fact that Najeeb is a Muslim because they suggest that this makes him less than other students. To the ABVP Najeeb is not a student, but a Muslim. If they are able to minimize him to his religious identity, then they hope to maximize their mobilization on communal lines.

The University administration has also – in a slightly less overtly communal way – used Najeeb’s faith background to malign him. The University did not file a complaint about his disappearance, but it brought out a press release in which it termed Najeeb as the accused. There was no mention that the University would ensure his safety and security when he returns to campus. The name ‘Najeeb’ – a Muslim name – has evoked a certain type of reaction from the police, the government and the University administration. Each sneers at Najeeb in a way that smells like communalism.

Najeeb is not defined merely by his religious identity. People live with a variety of identities, some of which are active and others passive. There might also be identities that are easy to recognize and others that are buried. The intensity of a particular identity being involved in a social situation might change in different contexts. As part of a political project, an identity might be activated or muted. These identities could be regressive or progressive. There is no simple assessment of identity nor of identity politics. Ambedkar once noted that unity of all Hindus – across castes – is perhaps only possible during a Hindu-Muslim riot. But even then there will be Hindus who might refuse to act according to the communal demands. Identity traitors are common in times of great stress. There can, therefore, be no single window into the practice of identity.

The identity of Najeeb is not neutral in the context of the attack on him and his disappearance. Is this a Muslim issue? What if Najeeb had not been a Muslim? Would he not have faced this attack? Would the Sangh Parivar target someone else – a non-Muslim, for instance? A JNU faculty member – a Christian – was recently attacked by the ABVP, who had fabricated a complaint against him on religious lines. What would have happened if Najeeb came from a Dalit community? The history of labeling a political movement as ‘anti-national’, the biases and prejudices reflected in conversations and the way the police operates suggests that a student from an oppressed community – especially Dalits and Muslims – would experience what Najeeb did. If the student were from Kashmir or the Northeast, of if the student were a sexual minority, the Sangh brigade would have acted in similar ways.

In these times, the very identity of being a JNU student is sufficient to warrant an attack. Workers, farmers, students – anyone who protests is considered anti-national. That Najeeb is a Muslim cannot be ignored. But, as we fight for Najeeb, we cannot ignore as well the attacks on other sections. Muslims in India can only overcome oppression when others – Dalits, sexual minorities, regional minorities, Women, Adivasis, Workers, Peasants – overcome this system that divides people and enriches a class minority.

A democracy that fails to address the concerns of the people and provide them equal space, irrespective of their identity, is a false one. That is why a larger unity for democratic rights must be made possible to resist this assault. The State manufactures consent to attack any section of the population by labeling a person with one stereotyped version of an identity must be answered by stressing the rights of all sections. We are fighting for our common rights, for our dignity, for a future. Najeeb is Najeeb. But he is also all of us. His disappearance is our disappearance.

Nitheesh Narayanan is a Central Executive Committee member of the Students Federation of India (SFI).