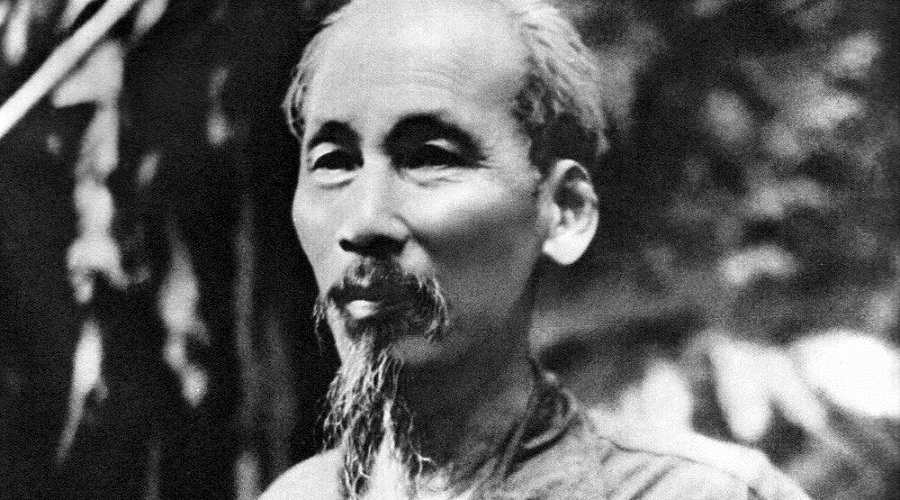 Having led the Vietnamese people to freedom and successfully through a devastating war with the French, not to mention the one with the United States which was to end several years after his death, Ho Chi Minh made this heartfelt statement to his compatriots shortly before it—filled with pride for their past and hope for their future. This text originally appeared in The Antioch Review (vol. 29, no. 4 [Winter, 1969–1970], pp. 497–99), and is going to be part of a forthcoming LeftWord title that brings together selected writings, speeches, and letters of Comrade Ho.

In our patriotic struggle against American aggression, we may indeed have to endure greater difficulties and consent to new sacrifices, but we are bound to win total victory.

This is a certainty.

I intend, when that day comes, to tour both the North and the South, to congratulate our heroic compatriots, cadres and combatants, and to visit our beloved old people, youth and children.

Then, on behalf of our people, I will go to the fraternal countries of the socialist camp and the friendly countries of the whole world and thank them for their wholehearted aid and support for our people’s patriotic struggle against US aggression.

Tu Fu, the well-known Chinese poet of the T’ang period, wrote: ‘In all time, few are those who reach seventy years.’

This year, being seventy-nine, I count among those ‘few’; still, my mind has remained very lucid, though my health has somewhat declined in comparison with previous years. When one is on the wrong side of seventy, health deteriorates with age. This is no wonder.

But who can say how much longer I shall be able to serve the revolution, the Fatherland and the people?

I therefore leave these few lines in anticipation of the day when I shall go and join the venerables Karl Marx, Lenin, and our other revolutionary elders; in this way, our people throughout the entire country, our comrades in the Party, and our friends in the world will not be taken by surprise.

First I will speak about the party: Thanks to its close unity and total dedication to the working class, the people and the Fatherland, our Party has been able, since its founding, to unite, organize and lead our people from success to success in a resolute struggle.

Unity is an extremely precious tradition of our Party and our people. All comrades, from the Central Committee on down to the cell, must preserve unity and oneness of mind in the Party as the apple of their eye.

Within the Party, the best way to consolidate and further solidarity and unity is to achieve broad democracy and to practice self-criticism and criticism regularly and seriously. Genuine affection should prevail among all comrades.

Ours is a Party in power. Each Party member, each cadre, must be deeply imbued with revolutionary morality and must show industry, thrift, integrity, uprightness, total dedication to public interests and exemplary selflessness. Our Party should preserve absolute purity and prove worthy of its role as leader and truly loyal servant of the people.

The working youth union members and our youth on the whole are of excellent nature, ardent to volunteer for vanguard tasks, undeterred by difficulties and ceaselessly striving for progress. The Party must foster their revolutionary virtues and train them both as ‘reds’ and as ‘experts’ to be our successors for building socialism.

Training and educating future revolutionary generations is an extremely important and necessary task.

Our labouring people, in the plains and in the mountain areas, have for ages endured hardships, suffered feudal and colonial oppression and exploitation; furthermore, they have experienced many years of war.

Yet, our people have shown great heroism and courage, ardent enthusiasm and great industriousness. They have always followed the Party since it came into being, and they have always remained loyal to it.

The Party must work out a very effective plan for economic and cultural development in order to continuously raise the living standard of the people.

The resistance war against American aggression may drag on. Our compatriots may have to face new sacrifices of property and of human life. Whatever may happen, we must keep firm our resolve to fight the American aggressor until complete victory.

Our rivers, our mountains, our people will always be;
The Yanks beaten, we will build a country ten times more beautiful.

Whatever the difficulties and the hardships ahead, our people are sure of total triumph. The American imperialists shall have to pull out. Our Fatherland shall be reunified. Our compatriots in the North and in the South shall be re-united under the same roof. We, a small nation, will have earned the signal honour of defeating, through a heroic struggle, two giant imperialisms—French and American—and of making a worthy contribution to the national liberation movement.

About the world Communist movement: Having devoted my whole life to the revolution, I am as proud of the growth of the international communist and workers’ movement as I am grieved by the dissensions now dividing the fraternal parties.

I hope that our Party will do its best to contribute effectively to the restoration of unity among the fraternal parties on the basis of Marxism-Leninism and proletarian internationalism, in a way which conforms to both reason and sentiment.

I am sure that the fraternal parties and countries will unite again.

About personal matters: All my life, I have served the Fatherland, the revolution and the people with all my heart and strength. If I should now depart from this world, I would regret nothing, except being unable to serve longer and more.

When I am gone, grand funerals should be avoided so as not to waste the people’s time and money.

Finally, to the whole people, to all our Party, to all our armed forces, to my young and infant nieces and nephews, I leave my boundless love.

I also convey my cordial greetings to our comrades and friends, to the youth and children throughout the world.

My ultimate wish is that our whole Party and all our people, closely joining their efforts, build a peaceful, unified, independent, democratic and prosperous Vietnam, and make a worthy contribution to the world revolution.