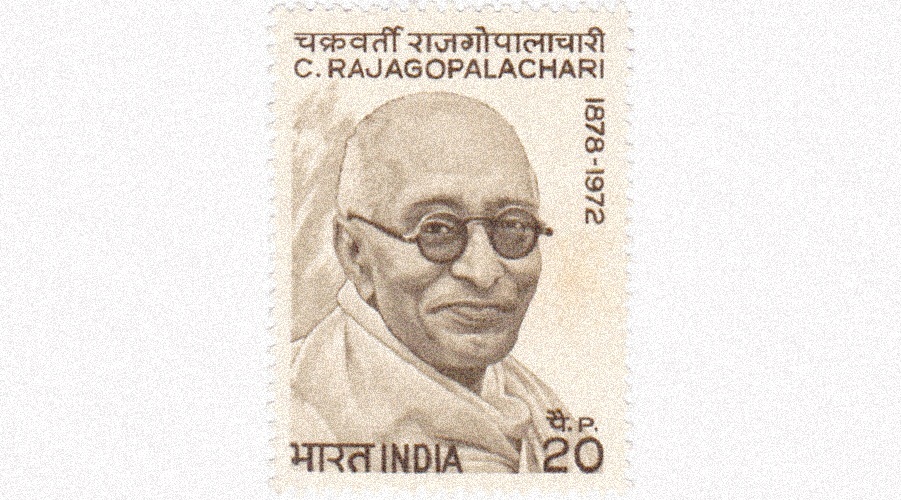 In 1953, C. Rajagopalachari, chief minister of the erstwhile Madras State brought in the Modified Scheme of Elementary Education. It turned out to be his undoing. D. Veeraraghavan’s MPhil dissertation, edited and annotated, with an introduction by A.R. Venkatachalapathy as Half a Day for Caste?, offers a unique account of the fallout of the law and the pedagogy behind it. Here’s Gopalkrishna Gandhi’s foreword to the book:

That, to borrow a part-phrase he coined, was the A to Z of his politics, his life.

Being conservative meant, to him, conserving what he found to be valuable. Had linguistics, not politics, been his field he would have been an etymologist. Had architecture, not the legislature been his site of action, his metier would have been the repair and restoration of grace in built heritage. Had weaving at a loom, not arguing in court, been his profession, he would have flown the shuttle to revive old patterns using vegetable, not chemical dyes, to create contrasts in the warp, conjunctures in the weft.

What he wanted to, chose to, and tried to conserve was of course determined by his own choice-processes. The conserver and conserved were in compact. That would have caused no problem or difficulty to anyone or to any stage in the history of his society except for the fact that his stars led him to seats of influence or authority where his conservation choices became the ingredients for policy and, indeed, policy itself. Is this not how any policy gets determined—that is, from the propulsion of an individual’s mind? So it does, but in a few people like Rajaji, whose faith in his own judgment was much stronger than his trust in the judgment of others, this subjectivity, even when of the most un-questionable probity and intent can become authoritarian. Rajaji’s conservatism, whenever it was empowered by position or office, turned from being a strong attitude to becoming a stern advocacy. And its ‘allies’ were not what they should have been, namely, prudent consultation or reflective discussion but an exclusivist dependence on the powers of his own intellection, his own exposition. He was the master and slave of his own argumentative sparkle.

Rajaji was also innovative. That, to borrow another part of the same phrase of his, meant that stagnation was his enemy number one and he was stagnation’s enemy number one. An ideational restlessness kept his conservative mind in constant ferment. This ferment was in its own way, innovatively intellectual, innovatively creative. ‘Schemes’ and ‘formulas’ emerged from his fertile mind with speed and force. Spoken and written advocacy being his metier. As with any innovation, the appeal of originality worked on him. And this attraction to the original included an original reconsideration of his own conservatism. This is where his early encountering of another conservative-innovator, M.K. Gandhi, made this innovative trait or tendency in him more than a style of functioning. It made it his signature in action. And the charkha, Gandhi’s spinning wheel, was its most symbolic and most stellar ‘key’. The charkha, like the loom, was an old, a very old, appliance of daily livelihood. Ergo, it fitted into a conservative’s and rural idealizer’s mindscape effortlessly. The charkha was something anyone with two wrists and ten digits for fingers— young, old, rich, poor, urban, rural, ‘high’ caste or ‘low’ caste— could, without too much training or expense, ply to make a point— Swadeshi—and break a spell—imperial hubris. And its product, a length of white cotton, was something which seemed to have a length of pristine power. Hand-spinning and its kin, hand-weaving, became for Rajaji the craft co-relative of intellectual creativity.

Rajaji’s conservatism and innovativeness had, as they did with Gandhi, a kindred spirit—frugality. This came from the insufficiently known circumstance of his financial straits. When his munsiff father earning Rs 5 a month sent Rajan to Bangalore to study, he had to sleep on the floor of a choultry in Chickpet, spending a grand sum of Rs 2 a month on that luxury. Before thrift and simplicity became for him a preferred personal style, they were an ineluctable reality. Conserving and contrivance were for him the hand-me-downs of inherited financial stringency as much as they were a natural bent. He was indigent by material circumstance before he became provident by intellectual labour. But in all this, severely, alone.

As a conservative he acted individually. As an innovator he acted distinctively.

When, after the elections in 1952, the Indian National Congress’s legislative party in Madras found itself facing ouster from office and a Communist government replacing its own, it turned to him for leadership. He complied, both as a conservative and an innovator. The conservative in him wanted to contribute to the stalling of a Communist takeover, albeit wholly democratic, of the state’s government. The innovator in him wanted to use the chance that had come unexpectedly his way, to turn some Gandhi-inspired projects of his own ideation into state policy. He had done that, some twelve years earlier, during his first helming of the province’s government. On that earlier occasion, as premier, the powers he held and the influence he exercised were, despite the restrictiveness of the Government of India Act of 1935, extensive. Quite overwhelming the British Governor and civil servants of the day by his intellectual sparkle and his propensity for hard work, he was premier in every sense of the term. Now, in 1952, with a very different wind blowing over his new-old office and the new-old legislative assembly hall in Madras’s Fort St George, the former Premier, Union Minister, Governor and Governor-General was in for a surprise.

The distinctive individuality of the former Premier was out of joint in times when as a chief minister he was answerable if not accountable to popularly elected MLAs, to his own party bosses and to a party high command and government at the Centre. An exclusive thinker’s whimsy, howsoever exalted in intent and elevated in tone, is in a democratic scheme subject to more than the standards of his own. It is subject to the judgment of a wider, diverse constituency called ‘public sentiment’. This his lean and lone intellect could not grasp.

D. Veeraraghavan’s treatise, set within the editorial casing of A.R. Venkatachalapathy’s thoughts, tells the story, piquant and plangent, of how Rajaji’s very ‘own’ scheme for a re-orientation of elementary education in the state collapsed, like a tiny runnel formed by a chance shower gets absorbed without trace in the surge of a river in its flood.

The late Veeraraghavan has written with a clear disposition against the failed scheme’s arbitrariness and its philosophical presuppositions robustly but without prejudice against its inceptor. He has thereby shown to us, in essence, the limitations of an individual leader’s prerogatives in the assemblies of popular representation.

Rajaji’s self-containment and parleying insufficiency was unfortunate as such but also supremely imprudent. If he had taken the scheme’s adversaries into confidence at an early stage of their demurring, some ideas could have emerged that might have purged the scheme of its unintentional distortions, especially the effect of caste-perpetuation, and saved both the scheme and his chief ministership. Someone might have suggested to him, if only he had given those ‘someones’ the time, that curricular learning or ‘book’ learning has to be the school’s central and un-diluted core, and instead of ‘parental’ or ‘traditional’ or ‘customary’ crafts, the new second vocational shift should concentrate, across communities, on hand-spinning and weaving and on the making and maintaining of progressively improved tools of agriculture, husbandry and animal rearing, with a research and development aspect. Also, that there is something called sport, fun. Children could be made to read and to put their hands to work. But what of the joy of their sporting spirit? That should be factored in. The argument might have worked with someone who was once ‘thin-faced eagle-nosed Rajan’, with defective eyes whose being ‘specky’ made swimming—a natural preoccupation in villages—impossible but who learnt some wrestling holds from a young Muslim boy, who was as devoted as Rajan was to a rock-carved Hanuman on the red-earth flatness of Hosur. None of this—khadi, husbandry-crafts, sports—could have been faulted by khadi-wearing Congress men or ‘development’-minded legislators of any mould. But did he listen? Did he ask? He knew what was best and that was that! Veeraraghavan brings out Rajaji’s mental chemistry with the sharpness of a psychoanalyst.

In his recounting and analysis, the historian in Veeraraghavan has balanced, with the Euclidean precision of a scale’s needle, his own ideological affinity and sense of egalitarian veracity with the intent of the scheme’s conservative formulator. He has in plain prose taken on something of a playwright’s sense of narrative give-and-take, investing every major player in the enactment his own space, his own moment. I say ‘his’, here, choicelessly for one of the verities emerging from this narrative is the almost total absence in it of the female voice except in the passive though ‘equal’ presence of the girl-child in the school systems being discussed.

In times when democratic norms are under threat—not from an independent thinker’s impulsive stubbornness but from manipulation by supremacist agendae—one may read of Rajaji’s educational scheme with nostalgia for times of political innocence when an honest administration’s offence was compliance before a chief minister’s whimsicality, a chief minister’s failing was arbitrariness, and a storm-tossed legislative assembly’s greatest moment lay in jettisoning the very distinctive lifeboat on which its majority had returned to its ‘regular ship’ cruising on the calm waters of stability.