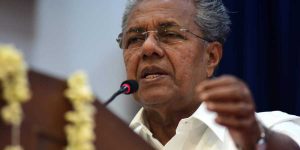 The RSS feed on fear. Fighting them requires depriving them of it. Pinarayi Vijayan, Chief Minister of Kerela, was born in Kannur, ground zero of RSS terror. He has seen the worst that they have to offer. At LeftWord Books, we published a collection of Pinarayi Vijayan's speeches, 'India vs. RSS'.

Kerala has been a land of socio-political movements. The secular fabric of the society stands on the history of hard-fought victories at the back of long struggles. This week saw the brutal nature of right-wing forces in the protests against Supreme Court's judgement allowing women of the age-group 10-50 entry in the Sabrimala temple. As the worshipers began their trek to the temple, women journalists and female devotees were beaten by RSS goons in the guise of protesters.

On Tuesday, October 16, Kerala CM Pinarayi Vijayan  spoke on the whole issue. This is an excerpt from his speech where he underlines the history of reform movements in Kerala and need for resistance against the tactics of BJP and RSS.

Our great legacy is that of our renaissance. Our society is based on that legacy of renaissance.  The renaissance movement came up under the leadership of Sree Narayan Guru, Chattampi Swamikal, and Ayyankali and so on. That is how this land, which Swami Vivekananda once called a lunatic asylum transformed itself into a model for the entire country, with its commitment to secularism and uprooting casteism. If we take the example of our country and our state, whenever social reform movements came up, there were also sections of people who came out against such movements. Those sections were not just the conservative elites. Many of those who were going to win rights and benefits as a result of the social reform movement were also persuaded to oppose the social reform movement using the force of the beliefs and customs which prevailed at the time.

Sati was the cruelest custom that our country has seen. A custom by which a widow was pushed into the funeral pyre of her husband. A law was brought in against Sati, as a result of the social reform movement. 8135 women lost their lives between 1813 and 1829, jumping into funeral pyres. These thousands would have become lakhs if this practice had continued. What would have been the condition of our country then? But even after the ban on sati, some women jumped into funeral pyres because of their beliefs and customs. There were large-scale protests against the ban.

Here in Kerala, people like EMS Namboodiripad, VT Bhattathiripad, Premji and so on led struggles against the wrong practices in the Brahmin community at that time. Those struggles enabled widows to remarry. Until then, the prevailing practice in the Brahmin community at that time was to get young girls to marry old men, even before the girls began menstruating. Often by the time the girl starts menstruating, the husband would pass away. Then the girl will have to shave her head and sit in the dark. That was the system. Such evil customs were there in our land. When the people I mentioned earlier led struggles against such customs, there were attempts to banish them from the community. There were threats against them.

In some places in our country, there was the practice of human sacrifice. It was changed to animal sacrifice later. Later that also changed to symbolic sacrifice, using a red liquid made of turmeric, quicklime and so on. These are all changes in customs. So many such changes have occurred in our country, in our state. A custom is a traditional practice. That would change from time to time. A custom that is common at one point of time may not be there at a later time. Earlier the practice was to bathe in the temple pond and enter the temple immediately afterwards, wet. Do people do that these days? People might be cleaning their bodies. But they enter the temple directly.

Earlier there were so many restrictions on women when they were on their periods. The women could not even stay inside the house. Nor could she get out of the house. Within the house compound, there had to be a separate building where she had to stay during that time. What about now?  Aren’t all these changes happened right in front of our eyes? Earlier, if a woman gives birth in a house, there was “vaalaayma”. If a family member dies, “pula”. (Practices whereby family members would be deemed impure. It used to take many days. What about now? Nowadays often, once the cremation is done, an announcement is made that everything is over. Family members who want to leave may do so. Everybody leaves then. Isn’t this the status of customs today? Shouldn’t we see the manner in which changes have occurred?  Didn’t such changes come because of the intervention of the renaissance leader I mentioned earlier? Struggles occurred against this during that time, didn’t they?

When the right to cover breasts and to enter temples and so on were given, there were protests against that too. Women themselves came out against it. There were women, who didn’t cover their upper body, who would tear the upper body clothes of the women who covered their own breasts. These are all part of our history. But did we stop there? Did our land, and time, stand with the women who said, “We don’t want to cover our breasts?” Don’t customs and practices change as times change?

All these changed as a result of the renaissance movement. There was a strong continuity to the renaissance movement here. The various movements that arose in our land: - the peasant movement, the working class movement, the Left movement. The interventions of these movements, which moved forward by imbibing the entire stream of renaissance. We need to see that even today, there are people who cannot accept such changes in our society. The set of people that includes Sree Narayana Guru, Chattampi Swamikal and Ayyankali also had others, like Ayya Vaikundar and Poykayil Kumara Guru Devan. It is the light that came as a result of all of them working to eradicate the evil customs that prevailed in our society that shines over Kerala today. We should remember that all of them stood for the breaking of customs.

Sree Narayan Guru installed the Siva idol at Aruvippuram. Wasn’t that a violation of customs? He was asked, what right do you have to do this? What did the Guru say then? ‘What I installed is not the ‘Brahmin Siva’, but ‘Our Siva’.’ It was a breaking of custom. The same Guru later said, what the people need from now onward is not the building of temples, but the building of schools. There too, we see the breaking of custom. Our renaissance leaders taught us that some customs are meant to be broken! We should remember this.

Look at the bullock cart struggle of Ayyankali. He traveled in a cart, sporting a bindi, wearing a silk turban and coat. Dalits did not have the right to do all these at that time. Did they have the right to sport a bindi? Did they have the right to wear a silk turban, and the right to wear a coat? They did not agree with the “justice: of the people who said that Dalits did not have such rights. “We have the rights,” they asserted. They fought to win those rights. I think it was last year, when I went to the Elementary School at Ooruttambalam, I saw that half-burned bench. Which bench? When Ayyankali took Panchami, a Dalit girl, to take admission in the school, the upper caste elites of the time set fire to the school. A half-burned bench that remained is preserved there, which I saw.

BJP is the party which is ruling the country. We should examine that party’s stand in particular. In Maharashtra, there is a temple of the god Shani. The Shani Shingnapur temple. That is its name. Women had never entered that temple. It was said that women should not enter the temple. That was the rule. The Bombay High Court ruled that women have the right to enter the temple. Maharashtra is ruled by a BJP government. Women are entering that temple now. So the court verdict can be implemented in a state ruled by BJP but, if there is a Supreme Court verdict in a state not ruled by BJP, a state which is ruled by LDF, then the BJP would lead a struggled demanding that the court verdict should not be implemented. What kind of double standard is this?

Similarly, there is another Supreme Court verdicts on the Haji Ali Dargah near Mumbai. There was a petition demanding that women’s entry should be allowed there. Supreme Court allowed the entry of women. All these are things that occurred in Maharashtra. The LDF government has been taking measures in keeping with our legacy of renaissance. Now, non-Brahmins can become priests in our temples. It was something that won widespread appreciation in the country. The upper caste elite had considered non-Brahmins to be ineligible for becoming priests. We took the stand that non-Brahmins can become priests once they have studied the rituals and so on. That was widely appreciated. Similarly in Devaswom Board job recruitment, reservation for SC, ST, and OBC was increased. That is also to be noted. A step to institute reservations for the economically backward among forward communities in Devaswom Board recruitment was also taken by the State government. All of these are measures taken in keeping with our renaissance legacy.

Congress members should think- would they cease to be part of Congress if they join the struggle led by BJP, without taking their own party flags? They would indeed cease to be Congress. They would become BJP tomorrow. You would see that. One thing those with the Congress should pay attention to. It is the approach of the RSS towards the Indian constitution. RSS wants to demolish the Indian constitution. They have been saying that publicly. They said that even in the Indian Parliament. But now there is an argument, which Congress leaders are also making. That belief is above everything. That belief is more important than constitutional values or laws. Belief is the most important thing. Do those who support this argument really recognize the danger behind it? There are news reports which say that members of the Indian Union Muslim League are enthusiastically rallying behind this argument. League leaders are excitedly voicing the argument. If belief is above everything, shouldn’t we stand with the belief that the Ram temple is located at that spot? The RSS and the BJP are with that argument. Everybody knows that the Congress also had stood with that argument.

The Sangh Parivar’s claims are not just on one Babri Masjid. They have been making claims about several places of worship in India. “It is our place of worship,” they claim. People who say that everything is based on belief should think what would be the future. Let them take their time. If they are in a position to think, let these people who flowed with such arguments think. One thing we should is, what is their aim? Their aim is not just to abuse the government or the LDF. Their real aim is to destroy the secular mindset of Kerala. The question is whether that can be allowed. That cannot be allowed. We have strongly resisted such moves before. On this issue, everybody should come forward, to defend our secular mindset, to powerfully come together against the moves to destroy our secular fabric, everybody, including believers of all religions, should come forward. This is my appeal at this moment.